Am I ever home?

"The world is lighter," he said, "because of you."
- Winter Of Fire by Sherryl Jordan
I am off to Christchurch tonight. Exciting!! Anyway, while I was starting to pack the other night I thought it was ridiculous just how many pairs of shoes I had to pack for this trip (umm, 6 pairs of sports shoes including climbing and cycling shoes, a pair of jandals and some sneakers - it's a busy trip). I'd only just unpacked from going to Rotorua last weekend...some days I think I should just live out of a bag. Oh wait, I've done that before too. If you are getting the idea that I am pretty much never home then you might be right!

Anyway, like I said, I was in Rotorua over the weekend for a race. M flew up on Thursday night and, after feeling too lazy to make our own breakfast we headed off to find food. I heard via the grapevine (well, you know, through an auckland vegan's blog) that the Vegan Revellers was back on the menu at Revel and since I remember it being delicious and I hadn't been to Revel in ages anyway I thought I'd drag M along there for breakfast. 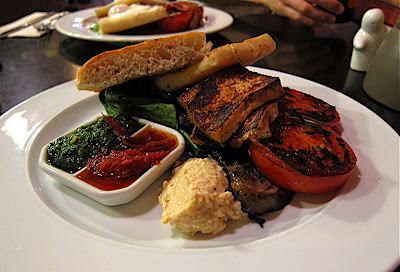 It is slightly different to the old version in that it has fried tofu in place of the falafel but otherwise I can't think of anything different about it. Still delicious. Still awesome. Still super filling. Yay!

But we still needed dessert (yes, even at breakfast time). I sent M up to the counter to get me a slice of their peanut butter pie... 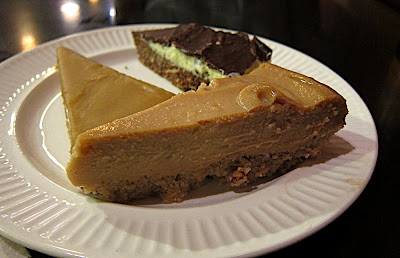 ...but he also came back with something else, vegan mint slice. Oh man, this was so amazing we debated going up and getting a few more pieces but since the guy serving us already thought we were crazy for eating so much sugar we decided against it but I really wish we had! 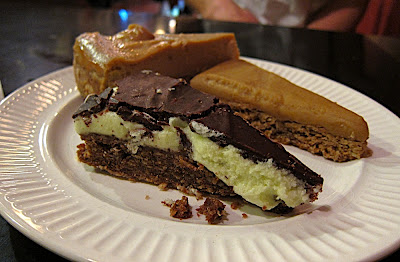 Unfortunately the ginger crunch at Revel (pictured in the background) isn't vegan so that was for M but I will definitely be stocking up on it when I get to Christchurch!

The drive to Rotorua takes several hours so we had to stop along the way for a picnic lunch. I'd made big Blueberry Ginger Spelt Muffins from Vegan Brunch but with extra crystalised ginger 'cause we both love ginger. 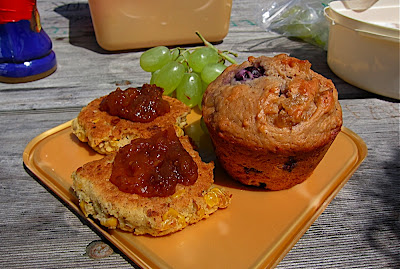 I'd also made some sweetcorn and bean fritter things roughly adapted from the Edmonds sweetcorn fritter recipe (using cornflour instead of normal flour, a mixture of ground flaxseed and water instead of the normal egg, added sweet chilli sauce and a tin of cannellini beans, mashed up). I served this with a random chutney we'd bought at the supermarket and a whole lot of grapes. Much healthier than our car food!

I had no idea what we were going to have for dinner so we just wandered round the supermarket in Rotorua hoping stuff would jump out at us. 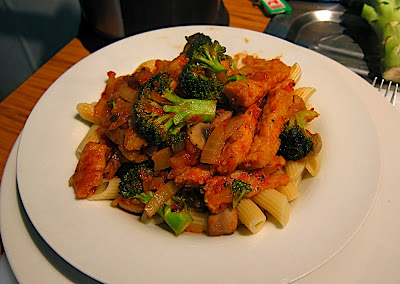 In the end I cooked up some pasta with a box of Fry's Vegetarian Chicken Style Strips ('cause it seemed amusing at the time) with some veggies and a bought pasta sauce. It was surprisingly good.