And it was all ginger

'I fear, to thy peril, my good Annette,' said Emily; 'for it seems his verses have stolen thy heart. But let me advise you; if it is so, keep the secret; never let him know it.'
- The Msyteries of Udolpho by Ann Radcliffe
So you want to make your own ginger crunch? So you want it to be awesome? So you want it to be so gingery that it knocks your socks off?

We went to a potluck round the road last night and poor M had to carry steaming hot vegan lasagna fresh out of the oven. It was delicious so therefore worth his hard work.

Anyway, back to talking about ginger, being the awesome person that I am, I had made a super gingery ginger crunch, braving the use of the oven despite ridiculously hot temperatures (what was with that? It's back to being grey and cool today). I still think I can make a better ginger crunch (I've mainly been focused on the icing and not the base which needs some work since it's mostly just the Edmonds version) but here we go since some people have been getting impatient! 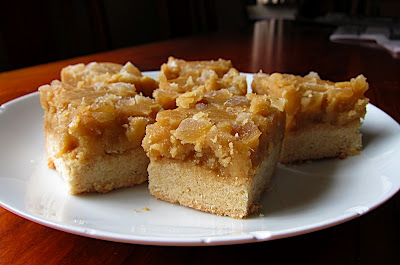 Cream the margarine and sugar until light and fluffy (or as long as you can be bothered especially if you only have egg beaters which are tedious). Sift the flour, baking powder and ground ginger together and mix into the creamed mixture. You might want to use your hands to get it all mixed in nicely. Press the mixture into a greased 20 x 20cm cake tin or something similar. Bake at 190C for about 20 minutes or until light brown. Just try not to overcook the edges as I did. Top with ginger icing as per below...

Ginger Icing
Melt the margarine, ground ginger, golden syrup and icing sugar together in a saucepan and mix well. Then pour over the base and sprinkle the crystalised ginger over the top (it will sort of sink into the icing). Chill until firm before cutting into pieces (a hot knife works best). I cut mine into about 20 pieces* but then again I was trying to feed the masses at the potluck.

*It's pretty hard to get this recipe wrong...let's just say I was baking in a kitchen where I couldn't find any measuring cups or scales so I improvised. It worked out fine. Just as a note, New Zealand tablespoons (Tbsp) are 15ml whereas I think Australian ones are 20ml. *This way you can eat several pieces without feeling bad! Not that you should feel bad anyway...ginger is good for the stomach.