ARC Journey to the End of the World

I had been tossing up between the NZ Rogaine Champs and the ARC adventure race (both were on the same weekend) but Michael pretty much refused to do a 24 hour rogaine so the ARC it was. We had really wanted to do the 12-hr but getting a double racing kayak is pretty hard and I was pretty disorganised in getting on to it so we settled on the 8-hr with the intention of racing it as hard as we could. But as the day was approaching I was feeling less and less keen...not helped by the fact I'd been sick for 2 weeks and had a lot of other things on my mind. It felt like deja vu from last year. 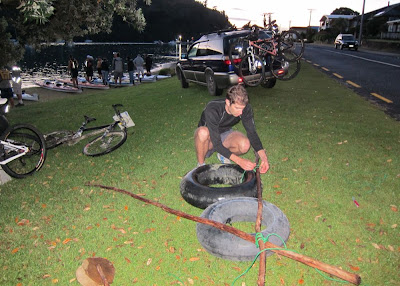 Michael working on the raft

We had race briefing the night before and I have to admit, I started to feel quite excited, although pretty apprehensive, especially about the final mountain bike stage which had the potential to be the make or break section of the race and we all know how anxious I feel about mountain biking (well, you might not but basically it scares me half to death no matter how much of it I do). Then the morning of the race we had to get there early to build our raft...we were able to use 2 inner tubes, 2 lengths of wood and some rope and were supplied with wooden paddles. 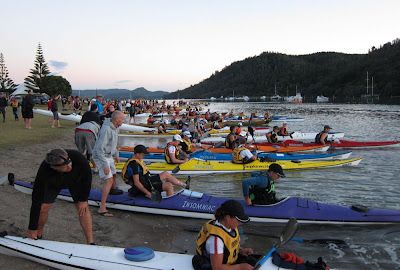 We finished our raft in time to see the 12-hr and 24-hr teams set off for their first kayaking leg and I really started to get excited, anxious and a bit jealous that we weren't out there kayaking (although also secretly relieved as the thought of a surf landing sounded pretty scary).

Our first stage was the rafting. We were starting in the second wave of 8-hr teams at 8:20am and had to paddle our rafts across the estuary to the other side and pick up a couple of checkpoints then paddle back. 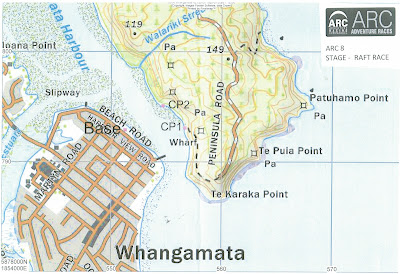 Let's just say that our raft was, um, not so good. I think we needed the tubes further apart as it would tip over when Michael would try and get on so he basically swum the whole way while I swam most of the way. There was a bit of a current on the way over but on the way back it had got pretty strong and I got tangled up in some boats! The checkpoints were also a bit mysterious as the checkpoints ended up being round the wrong way which caused a bit of confusion. I was pretty relieved to get out of the water 'cause I was knackered! Swimming in shoes is tough work. 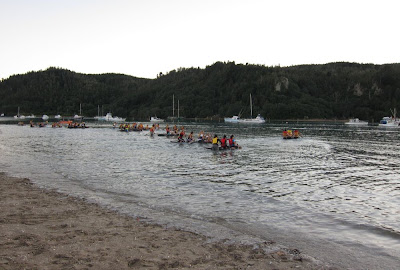 The first 8-hr teams set off on the rafting section

After a fairly quick transition and a change of clothes and shoes we set off on the second stage which involved a mountain bike ride to the rifle shoot then on to the transition area at Wentworth Valley. 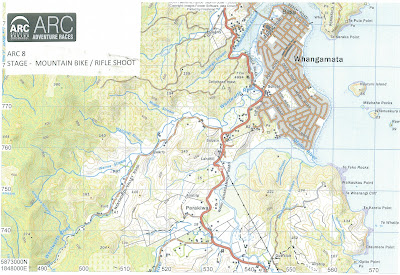 It was a pretty easy ride along the main highway then on to some gravel roads. At the rifle shoot we each had 5 shots at the "ducks". Last year I'd got 5 out of 5 but clearly I was feeling a bit cocky this year because I stuffed up the first two shots which really frustrated me. Fortunately I managed to pull it together for the final 3 shots. Then it was a fairly short ride to the transition area where we dropped the bikes, grabbed quick bite to eat and a swig of water and then changed shoes for the trek stage.

Stage 3 was a trek through the Wentworth Valley and up through the bush as well as an abseil down the Wentworth Falls (you can see a picture of the falls here). We caught up to a few teams on our way up the gravel road to the first checkpoint and raced onto the mining track we figured CP0 would be on. Found a mine (it said Danger Do Not Enter) but couldn't find the checkpoint. A few other teams turned up and also went in and had a look but we were racing off to see if there was another one by then. Success. So then we were off as fast as we could to keep ahead. CP1 was pretty simple. But then we made our mistake...although we didn't realise it until much later. 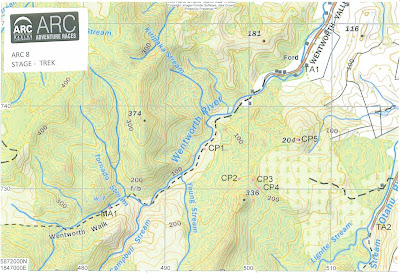 From CP1 we bashed up a very indistinct trail through the thick native bush to CP2 and then bashed even further up (scaling some cliff at one point and passing some teams who started in the first 8-hr group - one of the guys we passed called me a 'bloody machine'!) to CP3 where there was the most incredible view down to the coast at Whangamata and beyond. I wish we'd had time to take a picture really. Then it was down through the bush (trying not to slide over although I did have a couple of falls) to try and find CP4. This was when Michael started to question what was going on. For some reason he'd thought the abseil was at CP4 but we were no where near water. We both started to freak out until I had a look at the checkpoint descriptions and realised we were supposed to have gone to the abseil from CP1 then start up through the bush. Bugger.

Instead, we raced on to CP5 then down to the transition and raced back up the way we'd already come at the beginning of the trek to get to the abseil. It felt like a hell of a distance going back and we were going pretty fast to try and make up time so by the time I got to the waterfall I was knackered. I was in such a hurry I wasn't really thinking about how cool it was that we were abseiling down a 25 metre waterfall. Would so have loved to have done it again!

We made it back to the transition again in record time and got back on our bikes for Stage 4 which was a ride back to base. Pretty easy and so nice to be cruising on the bikes again after a pretty intense trek stage. I was definitely starting to feel weary by then too as I don't normally race longer events like this so hard!

We got back to base pretty quick and I attempted to get some more food down before we were off again for the final stage, a 2-hour mountain bike rogaine on the local tracks. It was pretty confusing as we were given 2 maps - a topo map and a trails map that you had to try and merge together to try and work out what was going on! 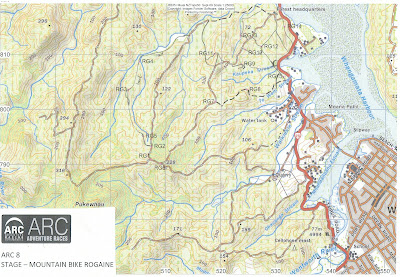 Fortunately Michael was doing the navigating while I was just attempting to keep up! But that got a bit tough so we loaded most of my gear into his pack which helped quite a lot on the hills. The route he'd planned out took us up to the highest point of the map before we slowly weaved our way down (with the odd steep uphill thrown in for good measure). The single track was pretty awesome riding (fortunately the rain the night before hadn't been too bad so the trails weren't too wet which was good 'cause they appeared to be clay based) but you had to be on your toes in case you missed the track you wanted or rode right past a checkpoint! We didn't see that many teams out there which I thought was a little weird but probably good as it's a bit frightening to be riding down a trail and meeting a team coming up. 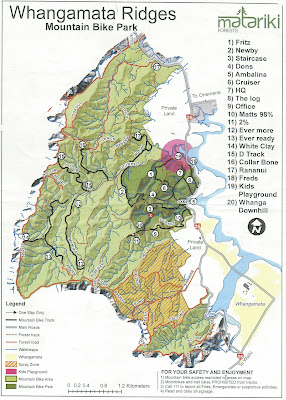 The bike park map for stage 5

We had trouble with a few of the controls mostly due to the mysteriousness of the maps (and the descriptions given for where some of the checkpoints were)!! But we actually managed to find all the checkpoints before we had to race back to the finish as quick as possible as the 2 hours was nearly up (we found out later that we were the only 8 hour team to get all the checkpoints for the mountain bike rogaine stage). Michael was pushing me from behind for parts of the ride along the road at the end to keep me moving fast and we came screaming into the finish but we were still a couple of minutes late. Worth it though for the points we made getting all the checkpoints. I pretty much wanted to lie down on the grass at this point!

Awesome race but probably a bit short as we finished in 6 hours 30 minutes (probably should have been more like 6 hours without the mistake in the trek) but I was dead by the end anyway! 12 hour race next year? 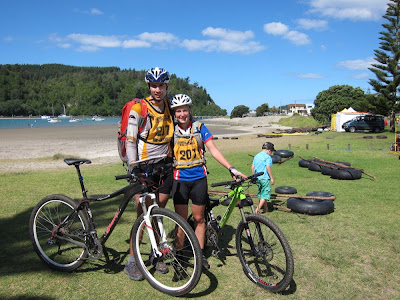 Did I mention we won?