Every adventure race is a little bit different which is part of the attraction but they all have the same basic elements - navigation involving trekking, mountain biking and some kind of water activity (normally kayaking but I haven't got that far yet). Then there are normally some kind of twists or mystery activities which will help you get more points. The thing to remember is there is no set course with markers and people telling you where to go...that's half the fun 'cause it's up to you to work out the best way round each section.

After surviving the 15 hours of Calamity and Cambridge together earlier in the year, Owen and I thought we'd have a go at tacking the ARC (Adventure Racing Coromandel) 8-hour (we'd do longer but, as I said before, I'm only starting out on the kayak...next time for sure!) Operation Blue Moon adventure race based out of Whitianga. Unfortunately I'd developed a cold during the week so wasn't exactly feeling crash hot or very fit. Oh well, I'm not one to give up.

The night before the race we had a briefing in the local town hall where they went over the basics and gave us a quick rundown on the activities involved in each section. As an 8-hour team, we were also given 4 long planks of wood, 2 inner tubes, 10 metres of rope and 2 paddles to build a raft by the start the following morning. No maps at this stage. We were informed that you would only receive the maps for each leg once you'd finished the one before. So we stayed up late putting together our rafts and sorting out our gear for our transition boxes.

Start time was 8am. Leg 1 - paddle your raft up the estuary, under the bridge and out into the sea round the marker and back in again. Sounds easy right? Well first we had no idea if our raft was even going to work and secondly, paddling those rafts was a hell of a lot harder than anyone anticipated. I don't think I got my heart rate up anywhere near where it went during this leg! It wasn't long but oh man was it tough! 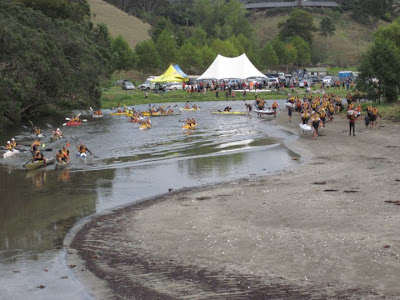 Leg 2 - mountain bike UP then portage through the jungle then bike DOWN then attempt Operation Blue Moon then bike to the rifle range and fire a few rounds then bike to the transition area for the first dive. I was actually quite relieved to be on my bike after the rafts and the route looked fairly easy (but steep). We biked up through the farmland and bush tracks for quite some distance before finally making it to the forestry road at the top (or at least we thought this was the end of the climb). Coming down the gravel road was a little hair-raising and we nearly missed the narrow track leading into the bush where we had to push our bikes up and up and up and up. At this point I got a bit feverish but there was nothing I could do but keep pressing onwards so it didn't seem much point to stress about it. I was so thankful to get out of that section and the breeze on the way down the hill revitalised me a bit.

So then we came to Operation Blue Moon...paint ball! You had to get your team through the course in 7 minutes without getting hit by a snipper (you got bonus points for taking out a sniper on the way through). Definitely didn't help being a team of 2 and we both got trapped in some of the trenches and eventually taken out by the snipers. Damn, those paintballs leave some wicked bruises! 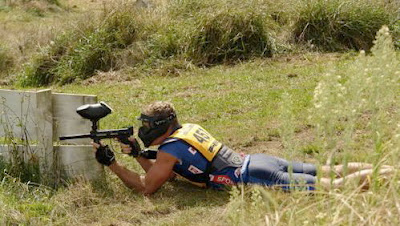 The rifle shooting on the other hand, well I was a natural! Never fired a gun in my life but I was totally buzzing after that (and hitting all my targets bang on). When we finally got to the transition area I was still buzzing! At transition there was a river dive to retrieve a coin inside a basket. Only one of us had to do this and since I was sick Owen offered up his services. Easy as he said. Afterwards we found out there were eels down there and it seemed most people encountered them but Owen said he never saw anything! 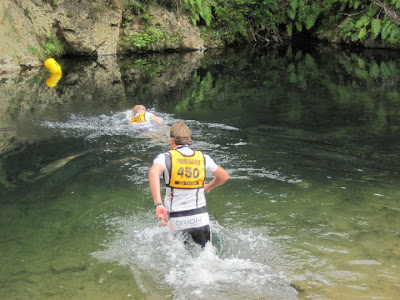 Mystery Activity 1 - the eel dive...but Owen didn't encounter any eels when he went down.

At transition we changed shoes, refilled camelbaks, downed some food (we'd been eating something every hour as well) and set off on foot for the next leg.

Leg 3 - trekking, river bashing and a waterfall dive. We set out jogging but it didn't last too long once we got into the first river and then up into the bush in search of an old mine where we had to pull out our headlamps to find the checkpoint. The mine was cool - like a narrow, rocky tunnel under the ground! Then it was back down and up the river on the other side which was a lot wider. It was a pretty long trek up through the river and at one point Owen ended up chest deep. I managed to miss the hole he'd ended up in so only got waist deep. Let's just say the water was very cold. Once we finally found the waterfall Owen dived again (made sense since he was way wetter than me already) but didn't find anything. So after much debate he tried the other pool much higher up (getting up that wet rock was interesting). Still nothing. At this point we were with a couple of other teams and they hadn't found anything either. I'd packed some goggles so Owen gave it another go and finally, success! It was a bit of a drag back down the river to the transition area and I was quite glad to be on dry land again. 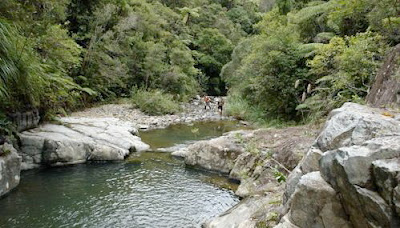 Leg 4 - mountain bike to the channel where you swim your bike across the water then bike back to the event centre. So yeah, we had to get back onto our bikes (changing into bike shoes and dry socks as well as packing our rope) and make our way to the channel. Roping the bike (plus my pack and shoes) to the inner tube provided wasn't too hard but actually getting the bike down the ramp into the water was a little trickier! There was quite a current in the channel which made it interesting but it was actually easier than I anticipated. Of course, getting out on the other side was a different story. By then you were cold and there was a bit of a breeze. Once back on the bike it felt like my legs were too frozen to pedal. 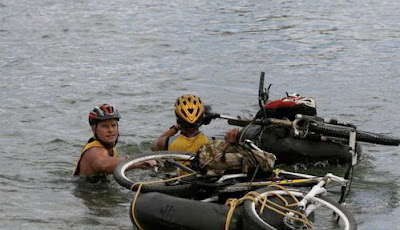 The portage across the channel.

We made good time back to the event centre (picking up a few checkpoints along the way). It was almost tempting to finish about now but there was still one more leg to go.

Leg 5 - bike over to the next bay then make your way round the coast (coasteering) and up into the hills then back down. Jump back on the bike and make your way to the finish. The hill over to the next bay wasn't really that bad considering what we'd already encountered but when you're feeling tired you feel every bit of incline there is. Tearing down the other side though is good fun! We had to keep our helmets on for the trekking section as we scrambled round the rock (there was some serious rock climbing and parts where we had to jump into the sea and swim, trying not to let the swell smash you back into the rocks). We couldn't find the first checkpoint but it turned out it had been washed away by the surf. Once off the coast it was up into the hills where Owen and I picked up some speed and got ahead of the teams that had been with us. It felt so good to be running despite the fact I was feeling sick.

Once back on the bikes we just powered our way to the finish as fast as we could...which wasn't very fast! It was a pretty cool feeling to finish and Rob and Marquita were there to cheer us on which was cool. 9 hours. Yay! 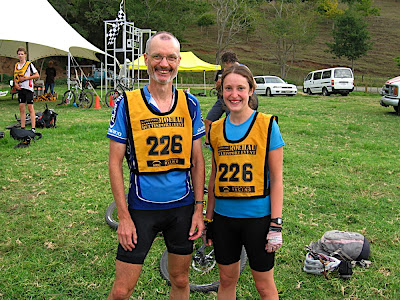 Owen and I at the finish...and it's still daylight!

On reflection it was probably the best adventure race I've done so far...heaps of fun with cool activities and none of the legs were too long so you got heaps of variation. Plus the coasteering and rifle shooting were awesome. But we both agreed that the navigation was too easy (we are orienteers after all) and we wanted it to be longer which means I have to get cracking on learning to kayak so we can enter the longer races. We'll be back.