Try not talking. Just listen. Really being there for someone without opinion or judgement is one of the best gifts you can ever give.

- Living with a Black Dog by Matthew and Ainsley Johnstone

This week is Mental Health Awareness Week in New Zealand and today is in fact World Mental Health Day. Not much more to say really...

In other news, we have moved! No longer are we in an apartment in the city but are in fact in a house in Royal Oak (the New Zealand Post site is convinced we're in Onehunga but we're 200 metres from the Royal Oak roundabout for goodness sake!) and are living in the attic on the top floor. It's a bit like something from one of my childhood fantasies.

So last week was kind of about trying to use up some of the food we had stockpiled in the pantry and freezer! First up was nachos. Once upon a time I had a recipe for these but goodness knows where that went so as usual it was created as I went along. Boy do I love cans of kidney beans and chopped tomatoes. They are there to make my life so much easier! But because of this I tend to stock up on them whenever they're on special and forget I have them (I suspect I get this trait off my Mum as once I was cleaning out her pantry and found she had over 20 tins of tomatoes despite the fact that she used them in plenty of dishes each week!). 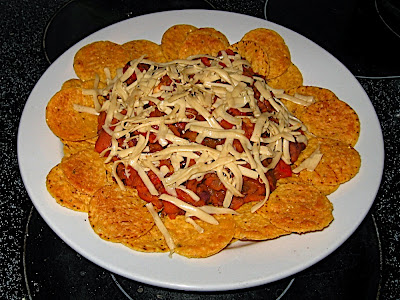 Garden of Eatin' cornchips are awesome, especially the yellow and blue corn chips. Grilled in the oven with a large serving of bean mix and some sheese and we're rolling.


I also had some soy sausages sitting in the freezer (and more of those tins of tomatoes...I told you I take after my Mum) so a tomatoey sausage mix on pasta was a must. Plus it's great comfort food to aid with the stress of packing (I don't like moving). 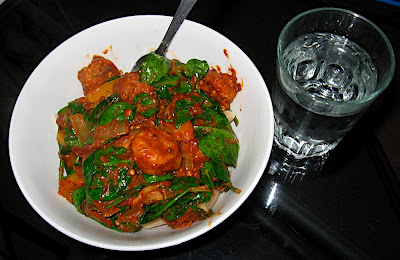 Here is our last dinner at the apartment as I cleaned out the freezer. A veggie pattie of some description with the last of J’s Mum’s spicy tomato sauce, kumara fries and stir-fried capsicum and mushrooms with tahini. 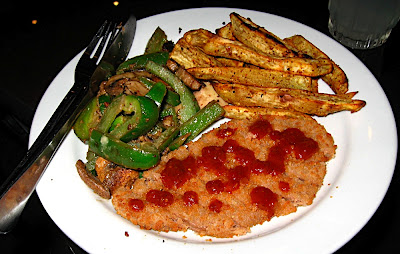 One of the things I will miss about living in town was the Mercury Plaza Food Court or, more specifically, Ruang Thong Thai Cuisine. What better place to have our final meal before we headed off to our new home on Sunday night. 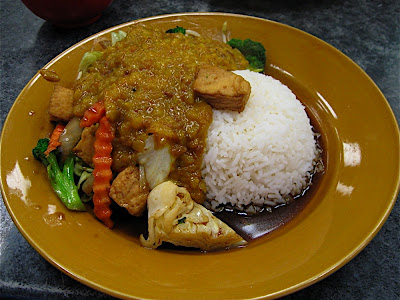 This is the vegetarian Pra Ram Long Song with tofu. Naturally being a kind of satay dish it is my favourite (my regular as J calls it).

So our first proper meal in the new place was definitely about comfort (by proper I’m meaning not out of a packet like the first night when we had some curry from the freezer section of the supermarket…don’t get me wrong, it was nice but home cooked food is always best). Satay tofu and rice. Actually, it's satay made from leftovers of a jar of almond butter and a new jar of cashew butter...so is it still allowed to be a satay?! The damn supermarket (our new local, Pak n'Save...remind me not to go there again in a hurry) didn't have any decent peanut butter (they could have at least had some of the Aussie Sanitarium stuff considering they had organic cashew butter!). 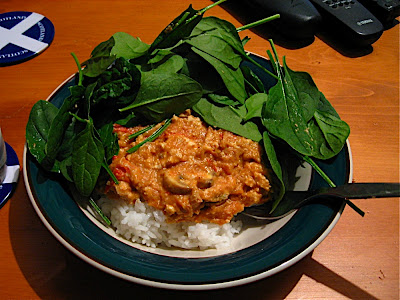 In fact, this dish (the peanut butter version) was the first meal I ever cooked for J so it must be good 'cause he stuck around! Admittedly though, it's never the same twice. That's why it's so good 'cause you can just use whatever you have on hand.

The weather's been a bit crappy this week so there is nothing better than arriving home after work (well, we actually ran home from work but that's another story) to the smell of fresh bread. I love bread makers and the lovely timer function! I served up the bread with a tofu scramble. Delicious! 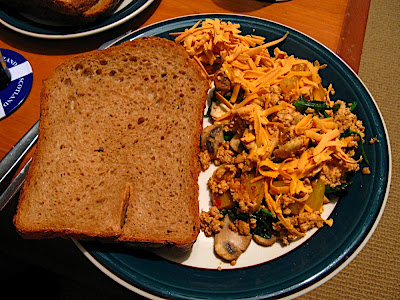 And of course the true test of a kitchen is whether you can bake in it. We had 3 very very very ripe bananas (the smell was SO strong!) so what else could I make but banana bread?! I made the Lower-Fat Banana Bread from Veganomicon using half white and half spelt flour with the additions of chopped walnuts and chopped dark chocolate. It was perfect. 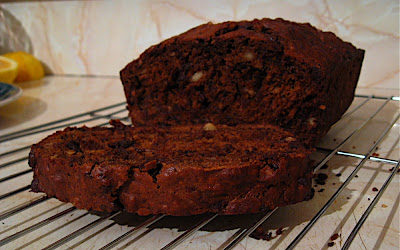 It's not quite warm here in the evenings yet so J and I often finish up the evening with a warm drink. At the supermarket the other day I discovered vegan gingernuts and was so excited I had to get some so some dunking was required. 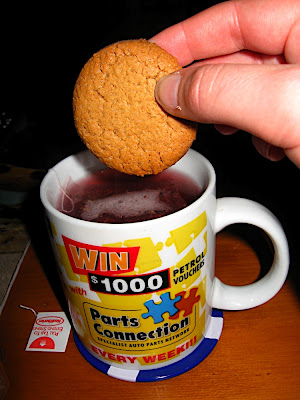 Tonight we're off to Christchurch and Queenstown until next Sunday. I SO need a holiday.