This past weekend was Queens Birthday weekend (her birthday is actually in April I think but I'm not complaining) so we got a lovely long weekend for some fun adventures. The weather was looking fantastic (but cold) pretty much everywhere which make trying to work out what to do much harder! In the end M and I settled for doing some long tandem rides from Murchison each day since we don't have the panniers set up for the new bike yet.

Saturday, after driving up from home, we set off up the road for a nice warmup ride towards Maruia Saddle. We rode as far as the main bridge before turning back since the sun was on it's way down and it was getting cold. It was the first time we'd taken the tandem out on the gravel and it seemed to handle it with ease.

Sunday morning we were crawling out of bed early ready for a long day. The plan was to ride to Westport (for hot chocolates and hot chips of course) and back which would be the longest day ride for both of us, coming in at over 200km. Exciting! 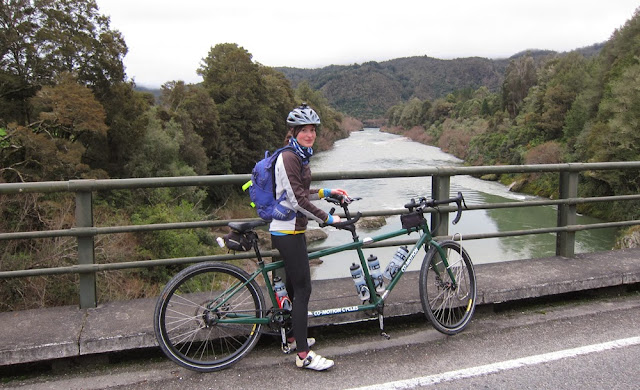 Heading off to Westport following the mighty Buller River

It was a cold start but I'd warmed up by the time we got to the Upper Buller Gorge. The scenery was fantastic and there was very little traffic around so it made for pretty awesome riding conditions but M had promised me hot drinks in Inangahua which was about halfway to Westport. Unfortunately the only shop was closed (for sale I think) so we pressed on into the Lower Buller Gorge for more awesome scenery (and, finally, some sunshine!).

After a fairly painless 103km we'd made it to Westport and, after a quick trip out to the coast on the end of the pier (with a fantastic view back to the mountains and Denniston where we have ridden during a previous visit) it was off to the nearest cafe for hot chocolate and fries. Perfect! Not that we could stop long since we were conscious of the ever decreasing hours of daylight left!

The ride back was pretty good. We had a nice stop at the cafe in Berlins (it has a place name which makes it sound like a town but the only thing there is a cafe/accommodation) then it was back on the road. The sun vanished with about 20km to go and so too did any resemblance of warmth which made the end fairly torturous. I may have been wimpering a bit on the back! 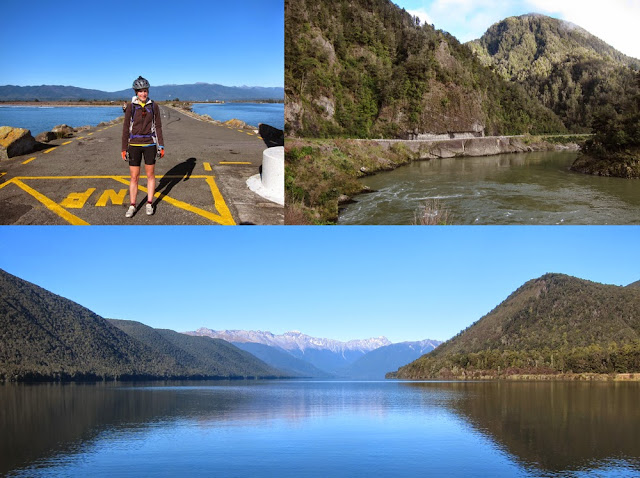 So much awesomeness. Clockwise from left: Westport! The Lower Buller Gorge. Beautifully calm at Lake Rotoroa

But if I'd thought it was cold then, well, Monday had another thing coming. We headed off along the back roads (via Braeburn Track) towards Lake Rotoroa and, despite being wrapped up in several warm layers and super thick lobster gloves, I felt like I was getting colder and colder. Once my feet started getting cold my right foot was really playing up making it difficult to pedal. The Braeburn Track goes up a valley through the bush that clearly gets no sun during the winter months as the frost was thick on the ground and the gravel was icy.

I did eventually manage to sort of warm up in time for a bouncy decsent down to Lake Rotorua where we had a delicious lunch of only slightly squashed sandwiches! The lake was beautiful and I would have liked to stay there longer but it was too cold so we had to bike on.

Despite the cold it was a fantastic weekend and a good test of our tandem on gravel roads (and long distances). M has ideas of us doing the 400km Marlborough Mayhem Kiwi Randonneurs ride in October which is a little scary and if Le Petit Brevet is happening again this year we were going to give that a go so we're going to have to put in some more long rides over the winter. I better get used to being cold!