Blindly running through the forest

Orienteering is seriously a crazy sport. It has to be one of the only sports I know of where competitors will do anything to compete despite no matter what ridiculous injury they’ve managed to inflict on themselves either through training or the orienteering itself. You should see the number of people strapping up their ankles to the extreme before the start of the race especially by the end of a big competition. But we’re hardy souls and the race must go on.

The last two major orienteering competitions I’ve been to I’ve come away with frustratingly tedious injuries. Labour Weekend last year I got some weird as lump on my shin as well as shin splints or a stress fracture (the debate never got cleared up as the sports doctor and physio just couldn’t work it out). Yes, a mystery lump. Then just as it looked as though it might be finally on the mend I had the Waitangi Carnival early this year and on the second race (my worst nightmare, the bloody night relay) I rolled my ankle. After stumbling round in the dark for the rest of the course occasionally letting out bloodcurdling screams of agony I finally completed the course (there’s a whole team waiting for me...can’t let them down!). Then, being crazy, I ran the rest of the races with a strapped up, swollen, painful ankle. Yes, I get the mad dandy “don’t you dare try and stop me” attitude from my mother.

Naturally I was hoping the nationals at Easter would be different (well, I damn well hoped so since my ankle was still as swollen anything and the physio was beginning to think perhaps I’d fractured it instead). Well, I did manage to escape injury-free but it certainly wasn’t without its dramas. Sunburn, lack of sleep, trying to put tent pegs into ground that felt like concrete (and quite likely was concrete underneath that grass), weird pains all over the show, hideous blisters, orienteering like a retard (read: hopelessly out of touch with the map and ready to sit down and cry), running even more like a retard (read: slowly...very slowly), ridiculously optimistic time management (trying to get to a wedding at the other end of the North Island on the same day as the Long Distance event with airlines involved).

Day One: the Sprint Distance at Henley Lake in Masterton. After driving down from Palmerston North that morning (and through Eketahuna...my first time in the infamous town although we were just passing through and only stopped at the local 4 Square!) we arrived in Masterton to blistering heat. I had no energy to push through a 2.6km (as the crow flies...do not be deceived by orienteering course lengths...this is no ordinary 2.6km, trust me) course round the lake and with punishing spectator controls and fast terrain I was just relieved to finish. 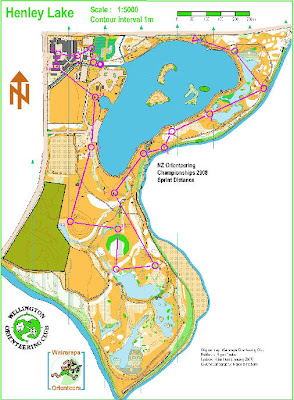 Day Two: the Middle Distance at Rangiora. I knew it was going to be steep from the casual glances at the landscape on the drive in and I was not disappointed (okay, that sounds wrong...I was disappointed I was correct as a little less climb might have been rather nice!). My course headed straight down into the bush where it quickly became a dark jungle. But hey, I was in touch with the map and all was fine, abet just not very fast. Everything was going okay until the last 3 controls. What was I thinking? Where did my brain go? very good questions. Number 8 I wandered back and forth in the thick, ridiculously steep, bush wondering where the heck that control was and why I couldn’t find it...but clearly I wasn’t the only one since there were a lot of people crashing around in there...unfortunately most of them weren’t looking for the same control! I found several that weren’t mine before finally spotting it hiding away (actually, I saw a couple of people sliding down a bank looking like they had a purpose and since I had nothing to lose I followed them!). 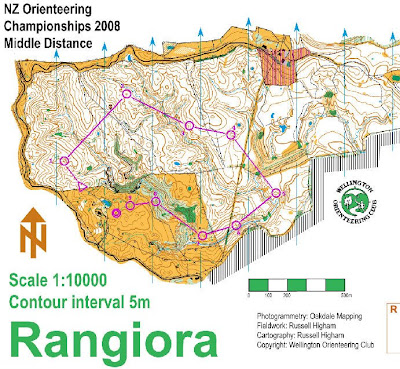 Day Three: the Long Distance at Te Wharau. For some reason the Long is my favourite event. I guess because you don’t have to be fast, you just have to navigate well and there is always time to make up for mistakes! Plus you’ve gotta get your money’s worth at some of these events! With nearly double the amount of climb (and more than double the distance) as the day before I suspected it was going to be, well, pretty physical and I wasn’t exactly mistaken. To begin with the start was 2.5km away (well, you were definitely warmed up by the time you got there!). Steep was, well, an understatement but for a lot of the course we were contouring around the side of these huge slopes (trying not to slip too far down and therefore have to come up again) which caused awful blisters on the soles of my feet. The organisers were right in the instructions when recommending strapping your ankles if they were weak ‘cause I felt my ankle attempt to break free several times...but it survived...just. BUT despite all the pain and suffering I navigated well for the first time in the whole weekend and came in with a fairly decent time. Naturally the Long Distance is still my favourite. 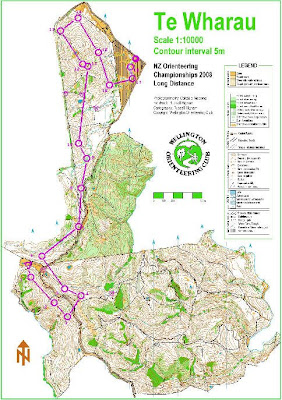 Okay, so what’s next in my mad calender? Auckland Champs here we come...