This water gladdened the heart. It was something other than a mere beverage. Its sweetness was born of our march beneath the stars, of the pulley's song and the exertion of my arms. It was good for the heart, like a present.
- The Little Prince by Antoine de Saint-Exupéry
So really, when you have a bit of a cold the best way to recover is to rest, take care of yourself and keep warm right?

Hmmm...I'm not known to be good at resting or taking a break. Instead I travelled to Whitianga on the Coromandel Peninsula with my trusty teammate O, and we embarked on a mega mission which was quite the opposite of all the ways one should look after oneself with a cold - the ARC Operation Blue Moon adventure race! You could expect nothing less really... Rest? Not happening. Taking care of myself? Well, that all depends on how you look at it right? Keeping warm? Well, I did have to swim (clothes, shoes, pack and all) at various points and tramp up a river so that also was not happening. I survived (clearly) but the cold is still lingering around which is frustrating with an off-road half this Saturday. Oh well, still a few days to get rid of it!

Anyway, onto real food ('cause you don't really want to hear about race food!)...

The Chef and I seem to eat out a lot (although it goes through fazes) but we tend to often go to the same places. We're pretty much regulars at The Blue Bird 'cause it's always quick, has good food and is fairly healthy. Plus they sometimes have my favourite dish in the whole wide world (okay, that might be an exaggeration but I do love it) - the kumara chip-topped tofu spinach pies (try saying that 10 times fast!). 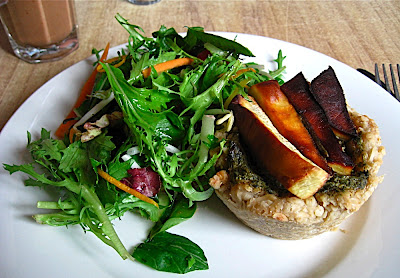 There's not a great deal of places I can go and get vegan dessert but you can rely on The Blue Bird for awesome crumble with soy ice cream. I have been known to come here for dinner and just eat crumble...one hell of a big bowl of the stuff! 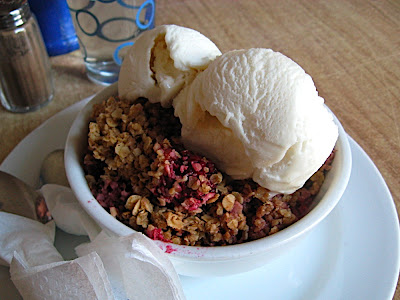 I thought it was about time I did another shoutout to the claypot place in Food Alley too which I regularly eat at with my cousin D. We are so regular that they know my order asking, "number 27?" every time either of us goes up to pay. Perhaps it's because the tofu dish is not ordered very regularly? 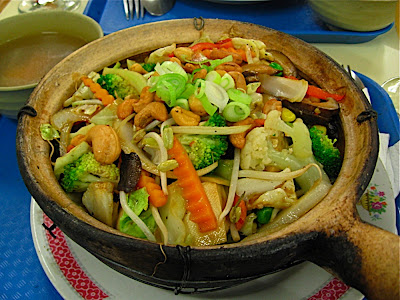 Across from the claypot place is the fresh juice place. D has her regular order but I like to mix it up every now and then. 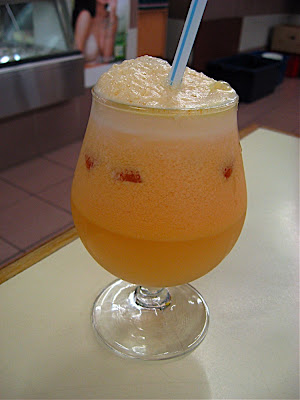 This is rockmelon and apple. Really good and I like how you can see them juicing everything while you wait.

But I do still cook! I think I like home-cooked meals the best personally but going out is still fun. One of my flatmates described my cooking style as chilled out which, although made me laugh, is probably true. She was referring to the way The Chef was watching me cook and that I wasn't to let him change my style. I'm too lazy anyway so there's not much chance of that. But if he can teach me how to chop things faster then I'll be thrilled...sometimes it's all about timesaving! This is a good example...tofu stir-fry with boiled then fried potatoes. I've never pressed tofu in my life. I generally drain it and squeeze some of the liquid out with a paper towel. Then marinating. My tofu would be extremely lucky to get marinated for more than an hour. It's still delicious! 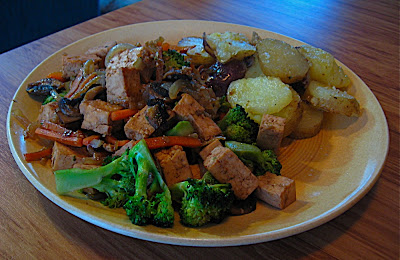 But basically I get home and ponder what I'm feeling like eating then open the fridge and pantry and see what's there and off we go. Then I just chuck in a little bit of this and a little bit of that and generally wing it...works (almost) every time!

Hmmm, this post is a tad disjointed...sorry about that. My head is all over the place going at a million miles an hour! Anyway, The Chef is cooking me dinner tonight so I should get to relax ☺