She read the way a cat eats: furtively, daring anyone to notice.
- Unseen Academicals by Terry Pratchett
There is a new vegetarian cafe in town (well, apparently it's all vegan or something like that but I don't really know). Okay, not technically in town 'cause it's in Mt Albert but that's still in Auckland city (until this whole supercity thing kicks in and then everyone is in Auckland I guess). Anyway, it's called Cosset. I had my mate M visiting from Christchurch last weekend so it seemed a good time to go check it out.

This is M's hot chocolate. It came with some kind of spicy biscuit which I got to taste. It tasted like a spicy biscuit. 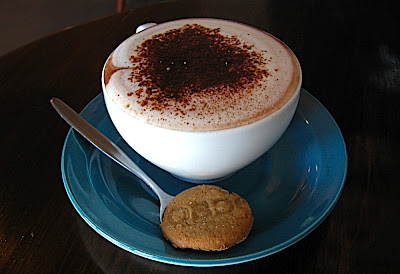 This was my berry smoothie. It was really yummy and so thick that I ate it with the spoon that they thoughtfully provided. 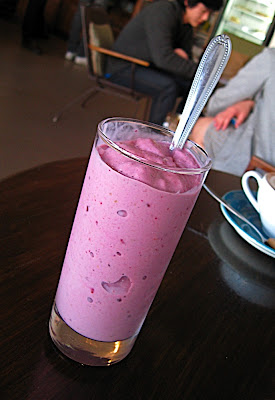 I ordered the hotcakes. I don't know why other than that it isn't every day you can go into a cafe and order vegan hotcakes. I wanted something savoury but picked something sweet...! They were really sweet (okay, so I did douse them in maple syrup as well so that could account for some of it) and not nearly as thick as I imagined hotcakes were supposed to be. They seemed more like crepes. 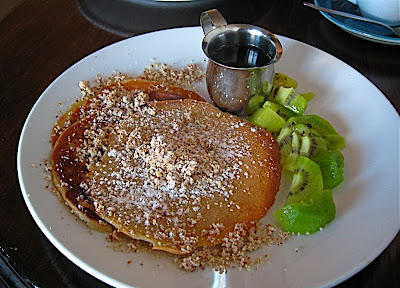 So instead I suffered order envy looking at M's toasted sandwich thing with turkish bread and lots of veggies and stuff. It looked and smelled exactly like what I wanted...unfortunately I didn't order it. 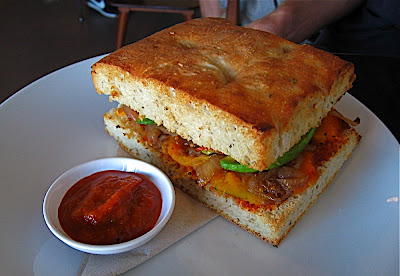 I left M in charge of picking some sweet things to finish (you might well say that I'd already had enough sweet stuff for the day...and you'd be right there but that's just too logical for me). Rule of thumb...don't leave a guy in charge of picking dessert when you sort of know already the kind of thing you want and you haven't told them (i.e. I wanted chocolate and cake which is no surprise really if you know me well. M clearly had forgotten this).

So we started okay I guess...dark chocolate and apricot balls (or something like that). They were okay but not earth-shattering or anything. 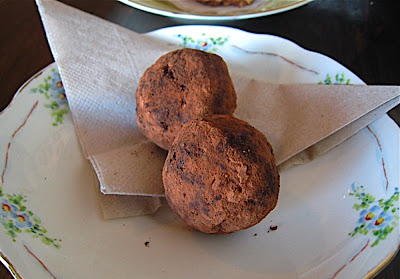 Next up was some kind of oaty cookie which I attempted to halve but it was very stubborn and rock-hard. It's the kind of cookie you want to dunk in a nice hot cup of tea. 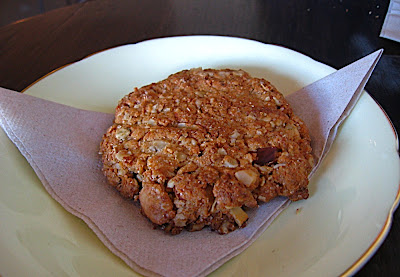 And finally, a spicy, fruity muffin which was the best of the bunch but still not what I wanted (this is not to say it wasn't a nice muffin 'cause it really was). 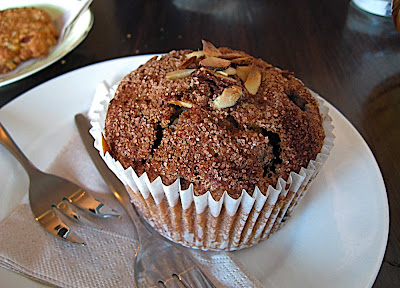 So all in all, I didn't exactly love my meal but I suspect that was what was picked. Next time I'll get something savoury ('cause that all looked awesome) and then make sure I get to pick dessert. Yes, it's a plan!