We are disappointed that you see fit to make light of our latest research on communication between the living and the living impaired. At this very moment we are rolling out Hades Explorer 4.0, heralding an unparalleled increase in the volume of living-dead communications. You will be communicating with us soon, one way or the other.
- How to Make a Tornado edited by Mick O'Hare
Wow! What an awesome, busy and exhausting couple of weeks it's been but here I am, still alive and still (vaguely) awake! 2010 is shaping up to be amazing. This past weekend I've been orienteering down in the Hawkes Bay (and sleeping in a leaking tent!) but the weekend before that I was hanging out around Cambridge for an adventure race that my friend SO dubbed the Death Race! At times during the race I wondered if he might have been right but here I am, still alive and loving it (my teammate and I clearly forgot all the pain and suffering and have entered our next one in March)!

Ever wondered what kind of gear you take on an Adventure Race? Well, here's some of my gear out ready to pack for a roughly 16 hour race (no, you don't get a break...I got asked this the other day and I thought it was quite amusing) I did a couple of weekends ago. Yes, there are 4 pairs of shoes there (different shoes for different stages - super-light offroad shoes, offroad shoes, running shoes and mountain bike shoes). 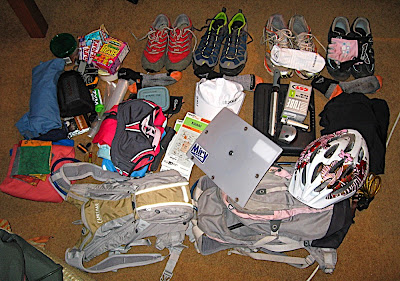 What did I eat during the race? Hahaha! I think I worked out it was 4 protein bars, a small handful of vegan gummy bears and 3 energy blast cookies (recipe to come when I am more organised). Oh, and I drunk a truckload of electrolytes. Yeah, felt pretty good apart from one section where I hadn't been paying attention and had gone nearly an hour and a half without eating anything. Probably should have eaten something more than a cookie before I collapsed into my tent at 2am but sleep seemed more important at the time!

My awesome flatmates had vegan chocolate cake from Blue Bird waiting at home for me the next day. There's no photo because it didn't last long enough!

Fueling up on the days before a big race is always super important. I'm still on a stir-fry for breakfast kick (listening to your body is always important). Breakfast on the day before the race was stir-fry with a chopped up veggie pattie and quinoa. Awesome! 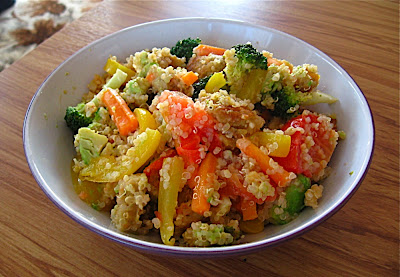 My favourite pre-race dinner is always satay tofu on brown rice and this race was no exception. Ah, I love this meal! It even ended up being my breakfast before the race too (eaten cold out of a plastic container in the car on our way down during the early hours of the morning). 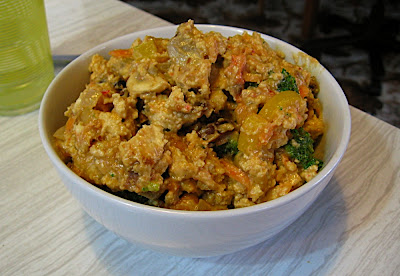 I swear it's way tastier than it looks! I even used a mixture of cashew and peanut butters just to mix things up a bit.