In my family, we seem to have a tortured history of not saying what we ought to and not meaning what we do. Kate covers her mouth with her hand. She backs out of the kitchen door, bumping into my father, who fumbles by cannot catch her as she scrambles upstairs. I hear the door to our room slam shut. My mother, of course, goes after her.
So I do what I do best. I move in the opposite direction.
- My Sister's Keeper by Jodi Picoult

I've done quite a few different sporting events in my time: orienteering of all descriptions (even relays in the dark!), rogaining and both road and off road running races but up until recently I'd never tried my hand at adventure racing. The Macpac Autumn Challenge Women’s Adventure Race seemed like the perfect place to start. You compete in teams of 3 and the race involves rafting, hiking/running and mountain biking all the while navigating where you are supposed to go. Well, I’m terrified of falling into the water (I’m fine if I’m swimming in it) and I truly suck at biking, let alone mountain biking. But hey, I can run and I sure can navigate so there was nothing really to lose.After a 2 hour crash course in mountain biking with J and his friends at the Woodhill Bike Park (as well as a bit of road cycling and spin class) I was fairly confident that I could get round without too much disaster. After all, the event info had said that limited experience was fine as it wouldn't be too tricky. Little did I know what was ahead...but hindsight is a wonderful thing!

The race was based in Taupo and the night before involved a crash course in rafting followed by race briefing and the handing out of maps. At briefing we also got our race packs which, for once, contained something I could actually eat, mini Lara bars!! I managed to score 3 different types: pistachio, cashew cookie and cherry pie.J and my friend from Palmerston North were on support crew duty which basically meant making sure everything was ready for us at transition points like moving the bikes (and pumping tires, testing gears and any other bike maintenance between thrashings), lining up clothing or footwear changes, and making sure liquid and food were waiting ready for us at each transition. Oh, and taking photos of us looking rather the worse for wear!!

The race started at the Taupo equestrian centre with a 1.5km run to the rafts (over some equestrian water jumps!) where you then paddled 8km down the Waikato River to the next transition point. You then hopped onto your bike for a 15km mountain bike back to the start area. Here you dumped your bikes and set off on an 11km run along the edge of the river up to the Huka Falls to the third transition area. Here you jumped back on your bike and headed up into the Craters of the Moon (Wairakei Forest) single track mountain bike trails. Once at the Craters of the Moon car park you ran round the boardwalk to collect clues then picked up your bike again and rode back to the transition area again where you then navigated your way to Spa Park where there would be a short orienteering course leading to the finish. Confused yet? Exhausted?! 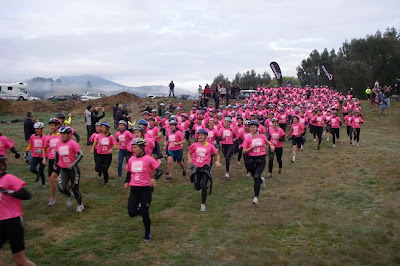 I could give you a run down of the event but that would take ages (well, it was a LONG race…we finished in about 8 hours 54 minutes) so I’ll give you some highlights (or lowlights depending on the angle you’re standing at!). 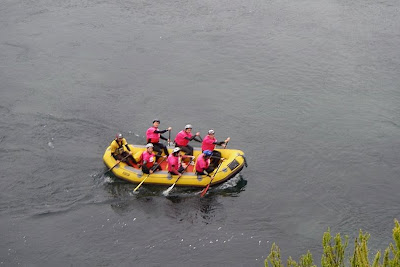 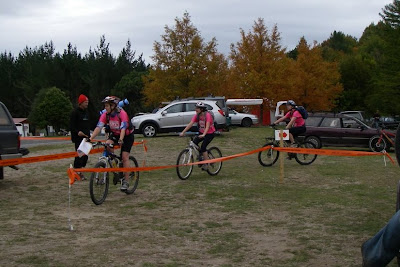 So after all that will I do another adventure race? Hell yes. But next time I will do a whole lot more mountain bike training!