It was the most commonplace question in the world. It was the question which, sooner or later, every child in the kingdom asks his governess or his schoolmaster or his parent. Yet the learned members of the York society did not at all like hearing it asked and the reason was this: they were no more able to answer it than any one else.
- Jonathan Strange & Mr Norrell by Susanna Clarke
I've posted about The Blue Bird several times before but it always deserves more mention as it is probably our flat's favourite place to eat out.When you walk in there is a cabinet filled with food (all helpfully labelled). It's always a surprise to see what they have (my flatmates and I have our favourite items that we're always on the lookout for and will bring back for each other if we see them). 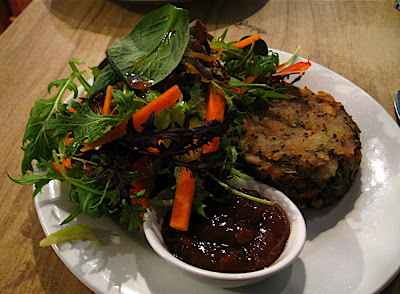 This is a Potato and Pea Rissole with chutney and salad. Pretty simple but real good.

I think this is a Pumpkin and Red Lentil Pie topped with strips of raw carrot and beetroot. 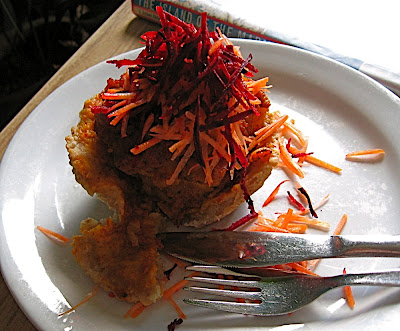 Whatever it was, it tasted damn good. I really like their pastry. We actually have a couple of Sri Chinmoy recipe books sitting around at the flat and I keep meaning to pull them out and cook up a storm but I've been a bit lazy. I ought to change this!

You can also order off their bowl menu...pick a size (small, medium, large...anything over a small is actually pretty large) a topping and then pick a base from brown rice, baked or mashed potato or baked kumara. It's served with a slice of grain bread and olivani (you have to ask for it instead of butter) on the side. 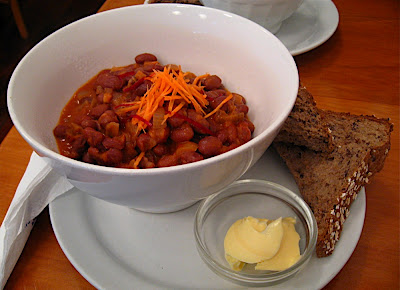 This is their African Beans on kumara. It would be better with a few veges but it's pretty good (and an awesome protein powerhouse). 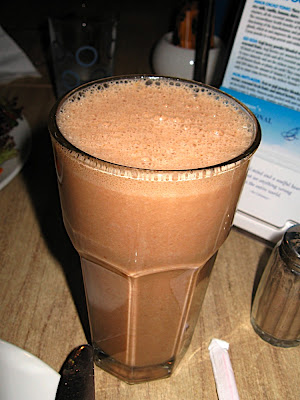 This is the Maca Cacao smoothie in all its chocolaty goodness. Can't remember what was in it but it was delicious and super filling.

Sometimes I get takeaways. This may just look like a container of mixed vegetables but let me tell you, this is their Roast Vegetable Tart and it is divine. I tried to take it out of the container and plate it to make it look prettier but the base was falling apart. 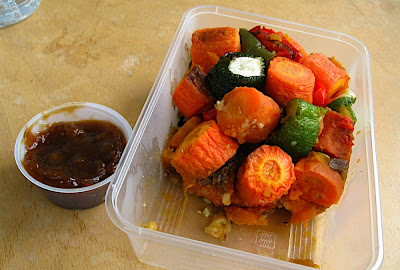 The base (which you can't see) tastes oaty and crumbly (and is apparently gluten-free for those of you needing that sort of thing) and then is topped with, actually, I don't know but it was brown and yummy. Then it's loaded up with roast veges like carrots, pumpkin, capsicum and zucchini...very delicious. Plus their chutney they serve with it is fabulous. Don't know what kind it is but I want some...now!

And one can't go to The Blue Bird without partaking in some crumble with soy ice cream. 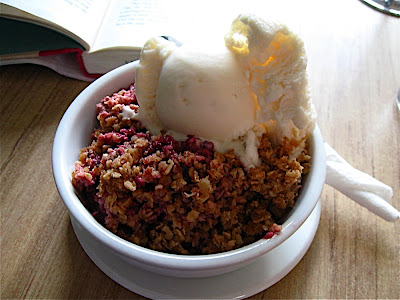 Seriously, this crumble can completely brighten my day...like I said yesterday, it's the simple things ☺