Very slowly, Glenda raised her right hand into a fist and lowered it into her mouth, and bit down very hard in an attempt to somehow retrieve the last fifteen minutes from the records of the universe and replace them with something far less embarrassing, like her knickers falling down.
- Unseen Academicals by Terry Pratchett
The other day I told M I was a domestic goddess. That may have been a slight exaggeration but I did venture into the kitchen to do a spot of baking (and do my chores for the week). There is nothing like the smell of fresh baking wafting through the house (nothing except eating said baking). The other morning I actually woke up to the confusing smell of chocolate brownies and fresh bread as my flatmate had stayed up all night baking as an attempt to procrastinate from his study...awesome!

Anyway, it was my Mum's birthday that night and what do all birthdays call for? Let's see...um, CAKE! This is a chocolate crumb cake. It is SO good and got much love from the family. And here is my (first) slice. We all went back for seconds (and were all tempted by thirds but one doesn't want to overdo these things too much). 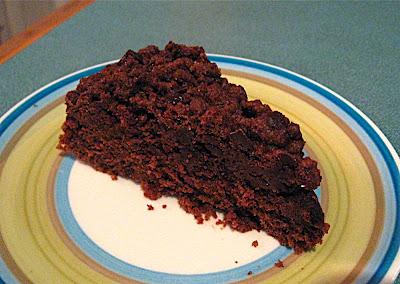 Then, because I am awesome, I whipped up a batch of chewy oatmeal-raisin cookies (from Veganomicon) for my cousin who was chained to her desk writing her masters paper and for M who lives in Christchurch which is enough of a reason by itself but a while ago he sent me my favourite ginger crunch in the mail (for those interested, yes I will post a recipe once I get something even close to as good as this). 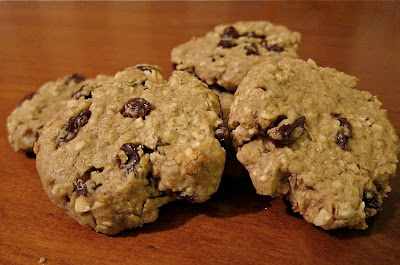 They were really quite good and because of M you actually get a photo because I'd eaten and given away all the cookies by the time I realised I still didn't have a photo of them. Thankfully (or perhaps not but in this case it worked in my favour) the post down to Christchurch is pretty slow so he hadn't eaten all of them by the time I hounded him to take some photos. His camera is much better than mine. Perhaps I should steal it.