I've never been a salad fan and although I would eat it I general wouldn't have gone out of my way to make one. So I don't know what changed but this summer I've been in to salads in a big way. Most days at work I have salad for lunch which I make up in the morning and sometimes I'll make one on the side for dinner as well.

Here's Friday night's lazy dinner of salad and 'cheese on toast' (well on the delicious ciabatta buns they sell at our local New World). This is the blue Redwood Cheezly one. I've taken to ordering several different cheeses online from The Cruelty Free Shop up in Auckland every now and then. My favourite is still the Sheese smoked cheddar but the Vegusto ones are pretty good. I'm looking forward to trying Angel Food's new cheese next time. 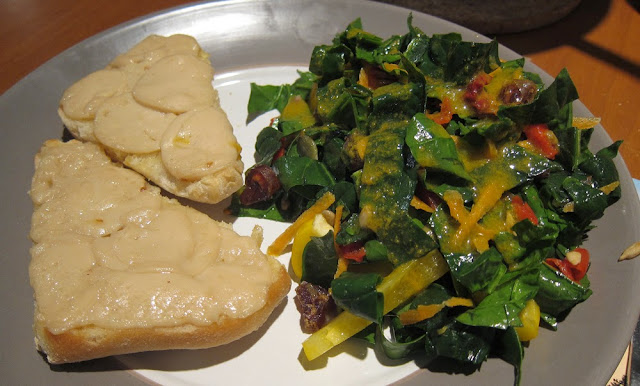 Anyway, I got sidetracked! Right, where was I? Oh, salad. Right. Friday's salad consisted of spinach (not baby spinach but good old spinach - probably my favourite salad green - I chop it up so you don't get big leaves which I don't really like), grated carrot, capsicum, tomatoes, pepperdews (sweet piquanté peppers), sundried tomatoes, dates, sunflower seeds and pumpkin seeds. Delicious! The dressing was our favourite Chermoula Dressing from the first Revive cookbook. I really like this dressing but you don't want to spill it on your clothes because it stains pretty bad (all the tumeric and cumin in it).

Today, after a morning ride on the tandem, we were in need of something to, umm, snack on whilst we caught up on the Giro action (M has turned me into a cycling addict). For some unknown reason I decided that I would try making the Peanut Butter Blondies that I'd seen on Neverhomemaker. I say 'for some unknown reason' because normally I would turn my nose up at baking something sweet that contained a can of beans or chickpeas. 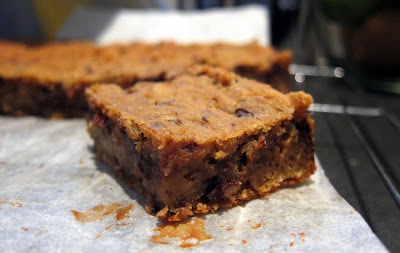 Anyway, it was made and we ate it and it wasn't too bad! Probably quite good really! I think I would make it again for lunches and stuff but not for something special. Yummy but tasted a bit too healthy!!