From inside the box

He shook his head sharply in the hope that it might dislodge some salient fact which would fall into place and make sense of an otherwise utterly bewildering Universe, but since the salient fact, if there was one, entirely failed to do this, he set off up the road again, hoping that a good vigorous walk, and maybe even some good painful blisters, would help to reassure him of his own existence at least, if not his sanity.
- So Long, and Thanks for all the Fish by Douglas Adams
Hello!! I have been floating around on another planet but tonight I have briefly touched down to give you a post (and a recipe!!!) and just say, well, there is some big stuff happening soon which is all terribly exciting but terribly scary at the same time but you'll have to wait.

For the last few weeks I've been getting a fruit and veggie box from Ooooby (you can see Moira's posts about Ooooby here) which has been really cool because not only does it save me trips to the shops where I ultimately end up buying the same thing every week but it has also led me to try things I don't normally cook with. My goal each week is to finish the box and try everything. It's not a very hard goal but it's fun!

Anyway, each week they include a piece of paper that tells you where everything is from and if it's organic or whatever. They also include a few recipes which normally I ignore because I'm not very good with recipes but one week they included a red cabbage in my box and I had no idea what to do with it so I thought I'd give the recipe a try...and was pleasantly surprised! Perhaps I should do it more often! 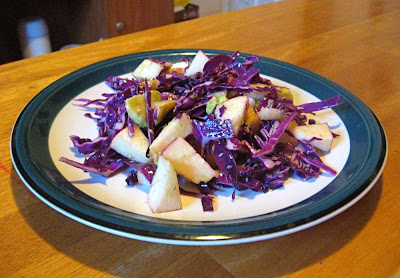 Cabbage, Avocado and Pear Slaw
I ought to say here that this is not quite the recipe that was included because, well...but it is pretty much the same.

Sesame Dressing
1/4 cup cider vinegar
1/2 cup olive oil (or rice bran oil but I used olive oil so therefore that's what I've put!)
1 Tbsp sugar
1 Tbsp sesame seeds
1 tsp sesame oil
Salt and pepper (which I think I might have forgotten to put in but I can't remember now

You might not want all of the dressing but it is quite nice! The slaw is quite good on the side with almost anything but even better with slices of fried tofu on top. 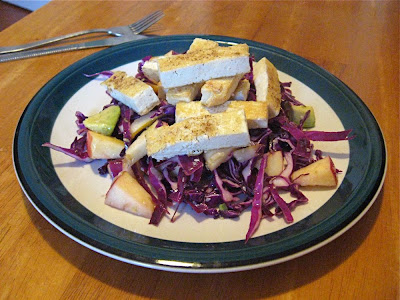