“So!” he cried. “Not an end, but the end of the beginning, eh? You progress, gunslinger! You progress! Oh, how I admire you!”
- the man in black from The Dark Tower I: The Gunslinger by Stephen King

No birthday is complete without cake. Our generation of New Zealand (and, I'm guessing, Australian) kids have grown up with delightful birthday cakes from the iconic Australian Women's Weekly children's birthday cake book (the original...not the new version). I've had robots, maypoles, pianos, dolly vardens, monsters, trains and more.

This cake was for my cousin's birthday. So, it's not anything cool like what we had as kids (well, sort of kids since I had the train cake for my 21st 'cause until then my parents always thought it was too tricky to attempt and required my brother's engineering skills to put it together) but it was just as delicious. 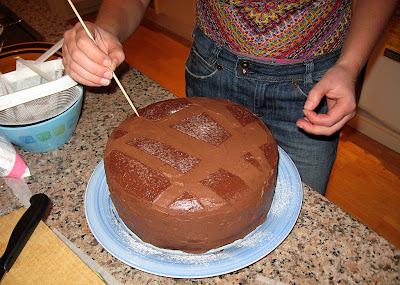 I think it's the Double Chocolate Cake from Sinfully Vegan (but I had to return the book to the library so I'm only guessing that's what it was called) with extra chopped chocolate in the batter and a chocolate tofu frosting from, well, some blog somewhere out there so I guess that really makes the cake a Triple Chocolate Cake! The health food store was out of soy cream cheese so I had to resort to good old silken tofu and Google. 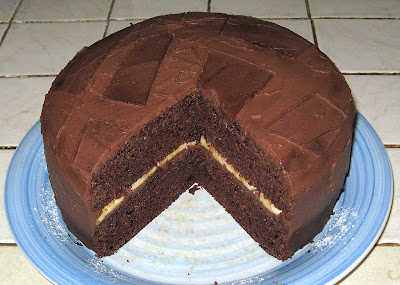 Oh, and there's frosting, chopped banana and mixed berry jam in the center (don't know why I bothered since I couldn't taste the jam...probably should have used more). 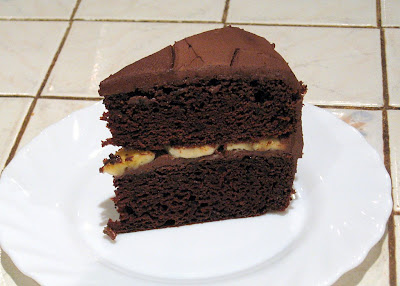 Of course, the party itself was then postponed (I found out midway through making the frosting) until NEXT weekend 'cause my Aunty had a fall but cake needs eating so we indulged anyway!