Hop on into my tummy

"Collar that Dormouse!" the Queen shrieked out. "Behead that Dormouse! Turn that Dormouse out of court! Suppress him! Pinch him! Off with his whiskers!"
- the Queen of Hearts in Alice's Adventures In Wonderland by Lewis Carroll

Welcome to a snapshot from out and about in Auckland eating good (well, mostly) food. 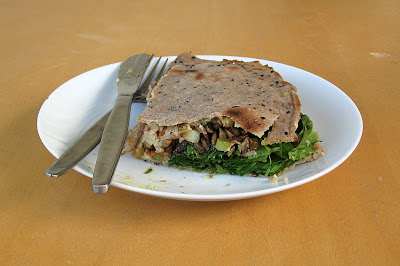 A vegan wrap from Harvest Wholefoods.

A buckwheat, rice and tapiocoa flour wrap filled with avocado, hummus, relish, roast pumpkin, toasted sunflower seeds, celery and mesculin salad. Apart from being incredibly fragile (hence eating it with a knife and fork) it was delicious. 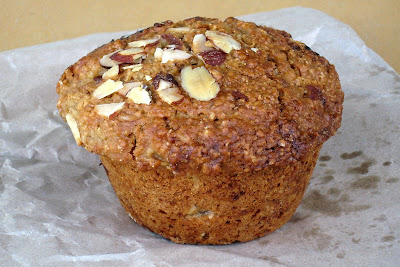 A vegan muffin from Kokako

Another one of Kokako's delicious spelt flour muffins - this time it's apple and rhubarb. They sure know how to make the tastiest muffins added, I suspect, by the addition of the spelt flour. 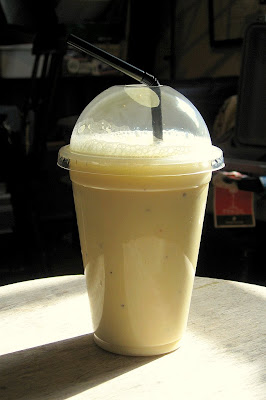 Peach and Passion Smoothie from Rivet

Delicious as usual but sometimes getting them to understand that yoghurt is a dairy product and can you please leave that out can be a tad trying sometimes. 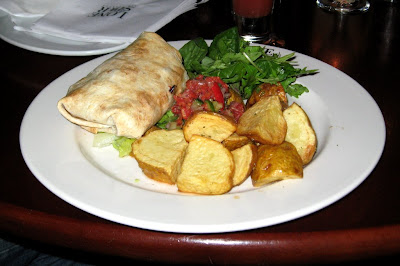 Vegetarian Burrito (minus all the cheese and sour cream it normally comes with) from Lone Star in Newmarket.

Out to dinner for the birthday of one of J's friends. The waitress was great which took off a little of the pressure of going out to dinner to a rather carnivorous restaurant. Sitting next to someone eating a huge plate of ribs though is never a highlight. 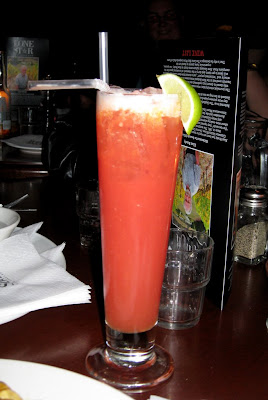 A fruit mocktail from Lone Star.

Dinner took SO long to arrive so J and I resorted to this mocktail to curb the stomach pains. Of course, as it was being made our dinners arrived! Typical! It was well worth it though. 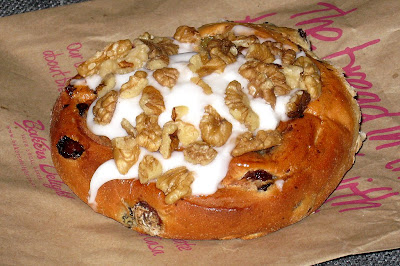 When all else fails, just pop along to Baker's Delight and there is bound to be something there worth eating. They have a fairly large range of breads that happen to be vegan amongst their range. The scrolls are a bit sickly sweet and the bread is kind of plain but still, at least they make stuff I can eat on the run (and it’s dirt cheap compared to everything else in Ponsonby).