How to stay alive

Time, unfortunately, though it makes animals and vegetables bloom and fade with amazing punctuality, has no such simple effect upon the mind of man. The mind of man, moreover, works with equal strangeness upon the body of time. An hour, once it lodges in the queer element of the human spirit, may be stretched to fifty or a hundred times its clock length; on the other hand, an hour may be accurately represented on the timepiece of the mind by one second.
- Orlando by Virginia Woolf
It was D's birthday recently and birthdays are important and need to be celebrated. Don't think about it as getting older (we're only as old as we feel anyway). Think about it as celebrating another year of being alive. Being alive is really quite underrated and trust me, it is definitely something worth celebrating.

We were going to have a little party a couple of days later but on the actual day I took her out for dinner at Revive. No one should spend their birthday alone. 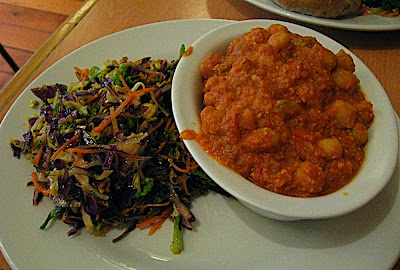 This is their hotpot of the day, the Tangy Tandoori Chickpeas which was served on brown rice and I chose the Juicy Bangkok Slaw for my salad. I love their slaws and this was a pretty good hotpot. I was starving so it really hit the spot.

Then a couple of days later we had a little party at D's parents. Aunty L loves creating platters... 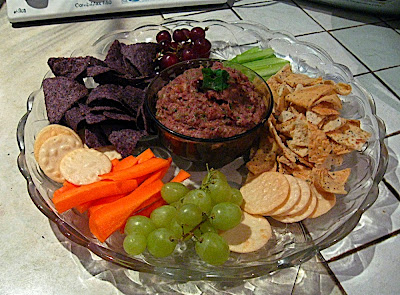 The dip was a spicy red bean dip from one of Alison and Simon Holst's Meals Without Meat books. I could have probably eaten the entire contents (this may have partly been because I was really rather hungry by then). I restrained myself but it was very good.

Everyone else was eating my Aunty's seafood chowder but she had whipped me up some kind of veggie and lentil casserole and it was pretty good. I ate it with more corn chips and the remaining veggies from the platter. 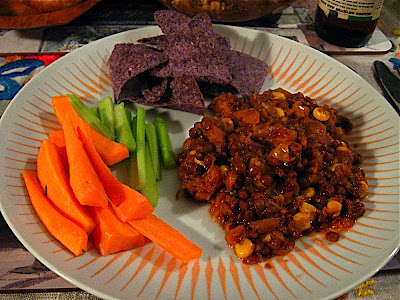 And then we had cake...which is really the main event when it comes to birthday food. I seem to have found my place within our family as the birthday cake maker. I'm not complaining (for a start, if I make it then I know I can eat it and I like cake so getting to eat it is a real bonus!). 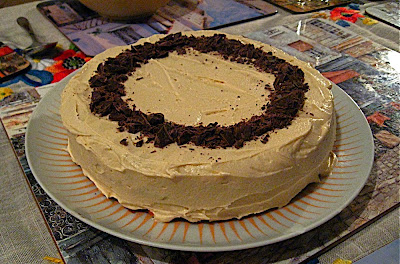 We are quite good at polishing off a cake in our family. Life is far too short for tiny slivers. 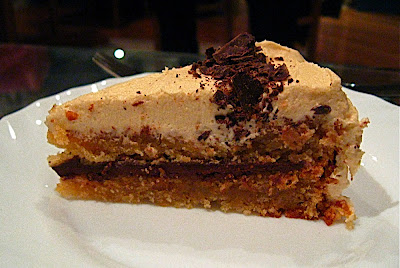 I do think this photo might be a tad deceptive. I swear the icing wasn't that thick!