I am a domestic goddess

I was waiting for the other shoe to drop. I was waiting for that moment - you know the one I mean - the moment when your date suddenly confesses to something you just can't stomach: he reveals himself as a racist or homophobe, admits he'd never marry anyone but another Baptist (Southerner, brunette, marathon runner, whatever), tells you about his children by his first three wives, describes his fondness for being paddled, or relates his youthful experiences in blowing up frogs or torturing cats. After that moment, no matter how much fun you have, you know it's not going anywhere.
- Definitely Dead by Charlaine Harris
Some days I just want to spend all day in the kitchen...like I'm having a fantasy about being a (not so desperate) housewife. Odd, since I don't want to be a wife, or stuck at home in the kitchen instead of working or adventuring. But I do like being in the kitchen.

Anyway, it's these sort of days which are perfect for cooking up a storm and stocking up the pantry, the fridge and the freezer. First up we have a big batch of stewed fruit which I use on my breakfasts. 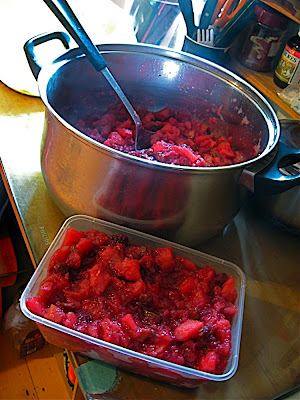 It's always a little different but this particular batch contained 2 x 1.5(ish)kg bags of organic granny smith apples (oh how I love having Harvest Wholefoods so close), a few handfuls of frozen mixed berries and about a cup of organic raisins...oh, and a dash of vanilla along with a good shake of cinnamon. This freezes really well too.

Next up was a giant batch of muesli (well, as giant as the oven dish would allow...it made 2 big containers full). Apparently muesli is granola. Is that correct? I don't know. We always call it muesli. 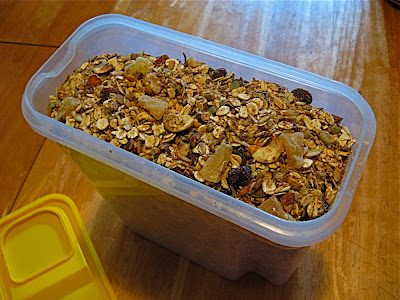 Hmmm, what's in it? I just tend to throw in what I have but I think it's got wholegrain oats, rye oats, rolled oats, some other kind of oats I can't remember (maybe buckwheat?), shredded coconut, sunflower seeds, sesame seeds, pumpkin seeds, almonds, cashews, brazil nuts and hazelnuts baked with a drizzle of molasses and a big spoonful of coconut oil. Once cooked and cooled I added ground flaxseed and dried fruit consisting of (I think) dates, pineapple, apricots and raisins (or were they sultanas? I can't remember).

There really is nothing like homemade muesli...I'm serious. Plus you can't really go wrong. Just don't talk on the phone while it's cooking 'cause you might forget about it. Luckily one of my flatmates was paying attention! Chuck in what you've got. I have a habit of finding stuff in my pantry and then emptying out the entire packet.

I also made my awesome muesli bars which I have before training every morning. They are SO good (an old flatmate once proclaimed them the best muesli bars they'd ever tried). Again, I just use what I have on hand but you can see one variant of my recipe here.