I can't fit any more in!

Not only are the present lists well under way, the food lists now have come to the fore, because for some reason making one meal on Christmas Day with enough leftovers in the fridge to scavenge on until the supermarkets open again is a big deal. A big enough deal to send the entire female population into a food frenzy. And although I can rationalise that, can logically realise how silly it is to get sucked into all the panic, I do it again, like every year.
- The Secret Diary of a Grumpy Old Woman by Judith Holder

Our family Christmas parties are always filled with some kind of drama which is, I suspect, a common occurrence for most families. What is it about Christmas that brings out all this tension? Anyway, this year's party was no exception...but at least there was some good food! 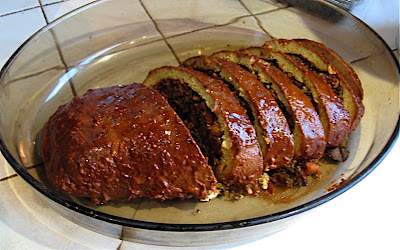 My contribution was a tofukey since the idea always cracks me up. I found the recipe somewhere on the net last year (when it had its first outing) and basically it's a basic stuffing inside a tofu and nut mixture which is then spread with a marinade and baked in the oven. 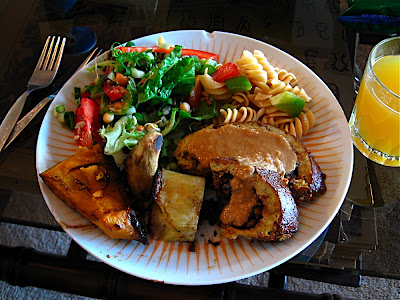 Here's the tofukey served up with cashew gravy, roast veges, green salad (mostly grown in Mum's garden!) and pasta salad. My soy sauce I used this year was a bit strong so it tasted overly salty. Bit of a disappointment but a lesson for next time.


Of course, the main meal of the family Christmas party is dessert! My contribution, as always, was the famous trifle in it's chocolate form. 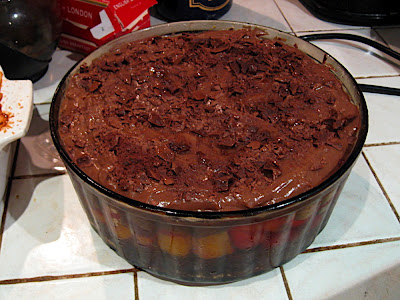 Basically it's a light chocolate cake spread with raspberry jam in the centre with fresh and tinned fruit on top of that (strawberries, pawpaw and a tin of mixed berries) topped with a thick chocolate custard and chocolate shavings. SO delicious! 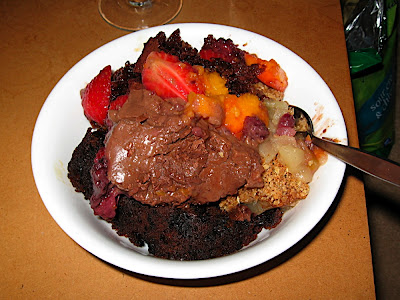 Here's my HUGE dessert bowl (it's not often we get dessert so you've got to make the most of it!). I've got chocolate trifle, apple crumble and Christmas pudding (care of Mum...she is the pudding expert).