And there you lie, Miranda, with a look of indignant, threatened innocence drawn across your face like a veil.
- Caliban’s Hour by Tad Williams

I had a hankering for those damn scones again but decided to try something else from Veganomicon while I have the book from the library. I’d seen a picture of the Lower Fat Banana Bread on Veggiegirl’s blog and decided to make that instead. Obviously it required changes as anyone who’s ever tried to buy apple sauce in New Zealand would know you can only buy it in a little bottle and it ain’t cheap. I cooked up a couple of little apples instead and pureed them. Not smooth and sticky like apple sauce but a damn sight cheaper. I changed some of the flour to wholemeal flour (I love the texture) plus I couldn’t resist throwing in some chopped cashews for some bite (I’d wanted walnuts but didn’t have any). As usual when I bake a vegan cake or a loaf I have trouble stopping the outsides from cooking too fast before the inside is done. The loaf was still a little mushy in the middle but it was delicious and moist.

The other night J and I got pizza at Hells (as usual I got the Sinister (hehehe) vegan pizza with added mushrooms and cashew nuts and without jalapenos 'cause it's always way too hot for me to handle...I'm a weakling when it comes to really hot food). J was studying the menu and eyeing up the dessert pizzas. I had to break his heart and tell him I couldn’t eat any of those but promised I’d make him one the following night instead (we still wanted dessert that night so got Lite Licks soy ice cream from the supermarket…I love hokey pokey ice cream!). So here it is, dessert pizza…delicious. I had leftovers the following night with homemade banana “ice cream” (Mum’s been eating leftovers for breakfast…she must love having me back home at the moment!). 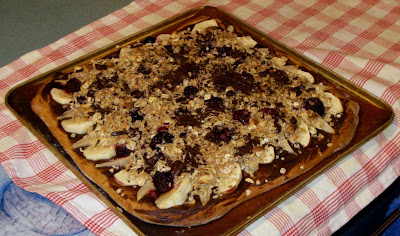 Dissolve the sugar in the water. Sprinkle the yeast over the water and leave for 10 minutes or until frothy. Mix the flour, baking powder and salt together in a bowl. Make a well in the centre and add the olive oil, molasses and yeast mixture. Mix well, adding extra flour if necessary. Knead on a floured board until smooth and elastic.

Mix the cornflour, cocoa and brown sugar together in a small saucepan. Whisk in ¼ cup of the soy milk until well combined then whisk in the rest of the soy milk. Heat until thickened (should be quite thick). Cover tightly with gladwrap and let cool.

Mix all the dry ingredients together in a bowl. Add enough oil until the crumble mixture is coated.

_Putting it together:
_Preheat the oven to 200°C. Roll out the pizza base to the desired size on an oven tray (we always try to roll it out as big as possible…doesn’t matter what shape it ends up being!). Spread the chocolate custard over the top of the base then layer the apple and pear slices evenly over the top. Sprinkle the frozen berries on top. Spoon the crumble topping and chopped chocolate over everything else making sure to get as close to the edge as possible. Cook for about 15 minutes or until the crumble is golden brown. Serve with soy ice cream or plain homemade custard.