So many thoughts scrambled for the emergency exit in Moist's brain that only one remained.
- Making Money by Terry Pratchett

I have tried to write this post so many times but it never comes out right or I think no one would be interested or it just ends up so long and twisty that I give up. But in the end I thought perhaps you might be more interested than I thought or that at least sometimes it is helpful so say what you need to say (even if it bores everyone else to tears)...

Last Monday started out like any other day. It didn't stay that way however. It was just after 1pm when we got the first big earthquake (a 5.6 I think) which had us diving under our desks. It wasn't long after we'd all managed to calm down and get back to work again that the 6.3 struck. The sounds are the most frightening to me. The groaning and grumbling of the earthquake itself, the collective holding of breath (which has a sound presence that is impossible to explain), panicked screaming, the rattling of, well, everything...and then the silence. That small moment of time feels like a lifetime. Then everything else gets broken down into tiny segments of memories.

I remember the terrible smell of chlorine spilling out of the cracks that formed in the spa pool outside. I remember seeing the birds flying manically through the sky in all sorts of directions and in huge flocks. I remember eating handfuls of licorice allsorts that the boss had taken out of his freezer (and wondering why he would keep them in there), not caring they weren't vegan. I just wanted something.

I remember drinking fancy wine out of a fancy glass while sitting outside in my fluro bike jacket and my helmet. I remember needing to use the bathroom but not knowing what I was supposed to do so just waiting and waiting. I remember our company director lifting my bike over the security fence which we couldn't get open because it needed power. I remember biking slowly through the park in an attempt to not to get sprayed by the liquefaction but wishing I could bike faster because I had visions of trees falling on me. I remember the dust and the queues of cars and getting lost on my way home when I found I couldn't take my usual route. I remember the poor lady at the traffic lights who spoke like someone had taken the bottom out of her world but that I just wanted to get away from her and the doom and gloom and get home.

I remember sitting in a doorframe near the front door at home worried about M because I couldn't get hold of him (despite knowing he would be fine) and holding my cellphone really tight in the hope that someone might magically realise I needed some company. And then just as it was becoming unbearable there was a knock on the door and our neighbour, who I'd never met, was there asking me if I was okay and if I wanted to come over to his house until people got home. I remember listening to his windup radio and being unable to sit still while he calmly cleaned up the mess in his kitchen.

I remember the relief to see familiar faces as everyone came home or popped over to make sure we were all okay. I remember the power coming on just after dark and sitting inside, still in my fluro jacket, watching the news on our warped television screen. I remember not wanting to be alone and wanting to keep everyone here I cared about in the room with me. I remember wondering how it was possible to be so tired but so unable to sleep. I remember crying and wondering why. I remember being alive. It was never in doubt that M and I would be okay but the magical feeling of surviving is amazing.

Anyway, in case you have managed to read down this far I do have something for you...on the day before the earthquakes I made myself an oatmeal cake for breakfast before going orienteering. It was super delicious, especially with soy yoghurt and because I am awesome I even have a recipe for you (based on the ones here). 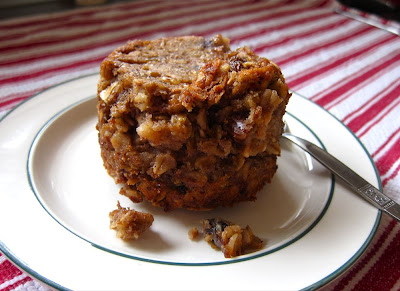 Spoon into a greased ramekin (about 1 cup I think) and cook for about 20-25 minutes until it's firm(ish).

Let sit for about 5 minutes then tip out onto your plate and hope for the best (you may need to run a knife around the side)!