If you eat too much pudding you won't sleep

The whole night suddenly rose up and whalloped me one.
- Dead as a Doornail by Charlaine Harris
So, as I said in the last post, my mate M was up for the weekend recently. Instead of hanging around Auckland we decided to head north a bit to my beach house. After a long car trip up through the Friday afternoon traffic and munching an entire packet of vegetable crackers (um, how can you have an ingredient listed that simply says vegetables. I mean, what vegetables? Aren't you going to list them?) I made us dinner. 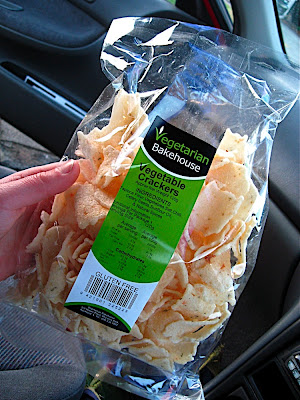 Turning on the oven when it's this cold is a very good idea (so is huddling by the heater under a snuggly blanket). So dinner was pizza using bought bases (well, actually Turkish Bread pizza bread which makes a mighty fine base) and a fancy tomato sauce then topped with onion, capsicum, mushrooms, courgette and black beans mixed together with a bit of oil and finished off with grated mozzarella cheezly and sliced tomato. 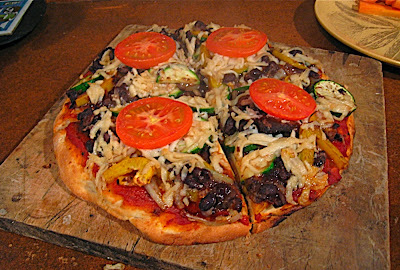 Oh and there were some veggies on the side...steamed broccoli and raw carrot sticks. I needed a veggie kick after way too much sugar at lunch. 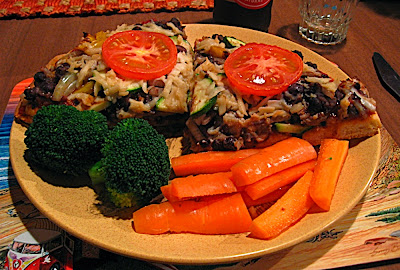 Breakfast...some fancy store-bought muesli (which, no matter how fancy it is, never can taste as good as homemade), stewed apple and kiwifruit, soy yogurt and oat milk. There was also toast but that's not pictured. We were fueling up for a long run later that morning over the hills. 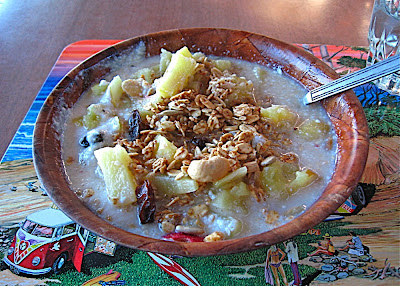 There was lunch in here at some point...leftover pizza on the hills somewhere and toast when we got back. You can just picture it instead. We all should use our imaginations a bit more (plus if you imagine it, what you see might be more exciting than what it really was which could be kinda cool).

Then dinner. Food always tastes amazing up here no matter what you cook. Perhaps it's because we tend to spend the days exploring and getting out in the fresh air. Or maybe it's just because this place is magic. It could, of course, be both. 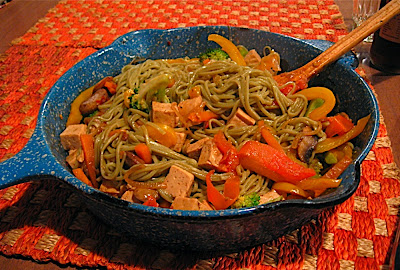 I marinated some tofu and then stir-fried it with some veggies. This was served with two thirds of a packet of green tea soba noodles. Difficult to serve and messy to eat but delicious. I should eat these noodles more often. 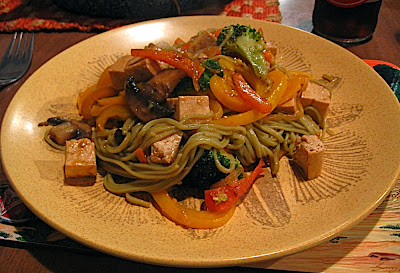 Dessert was required. I made a mint chocolate self-saucing pudding adapted from a recipe in the Edmonds Flatters cookbook...although I got a bit impatient waiting for it to cook so we probably started eating it about 5 minutes before it was properly done but hey, it was just super fudgy and there is nothing wrong with that! 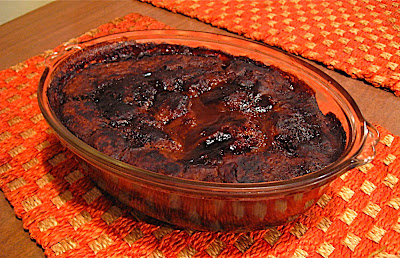 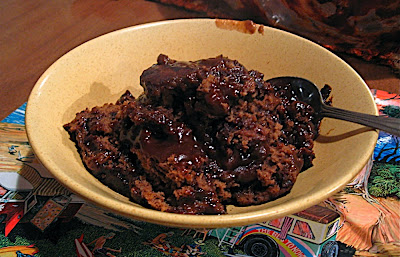 Now let me show you something disturbing(ly awesome?)... 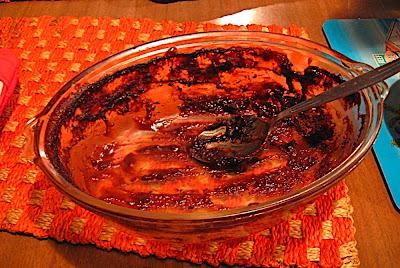 Yes. What you are seeing is true.

To make up for that I made us both massive tofu and veggie sandwiches to take out to the orienteering the next day (hummus, marmite, lettuce, tomato, carrot, beetroot, fried tofu, soy cheese). Even after squashing this sandwich down to pack it up, it was still impossible to wrap my mouth around. 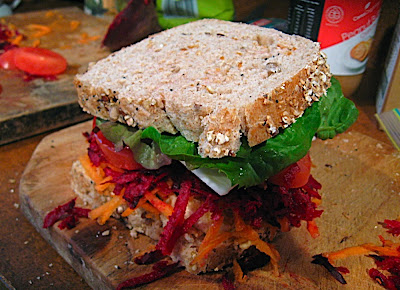 But after this high dosage of wholesome veggies and grainy bread I felt much more like a healthy human (I suspect I looked like a crazy monster attempting to eat it though).