In which the big green monster finally makes it home: Part Five

I always knew that the homeward leg was going to be a bit tough. For a start, I didn't want to go home...I wanted to keep on biking all day, every day!

We decided to hang around and laze in the sun (well, actually the shade as the sun was too hot) most of the day in Tekapo (after a morning run up round Mt John to take in the amazing scenery) before riding the short distance to Fairlie in the late afternoon. In retrospect we perhaps left it a bit too late in the afternoon as the wind had picked up a lot and it felt a bit like riding backwards! The wind died down a little bit over Burkes Pass but it sure got colder! 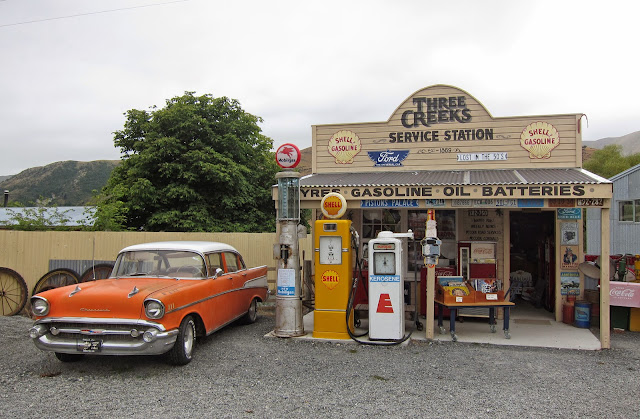 The next day we decided we didn't want to take the long route round to Geraldine which that meant we were going to be riding on a fairly busy bit of highway so an early start was required to beat the traffic. Worked pretty well but it sure was a cold start! I was feeling pretty cheerful especially when I got to go to the chocolate shop and buy copious amounts of fresh raspberries.

After a super long stop at Geraldine we headed off to Peel Forest and the lovely DOC campground there. Unfortunately it was still pretty drizzly which is never fun for putting up tents. There are some lovely walks through the bush here...we only explored a fraction of them. I shall have to come back another time. 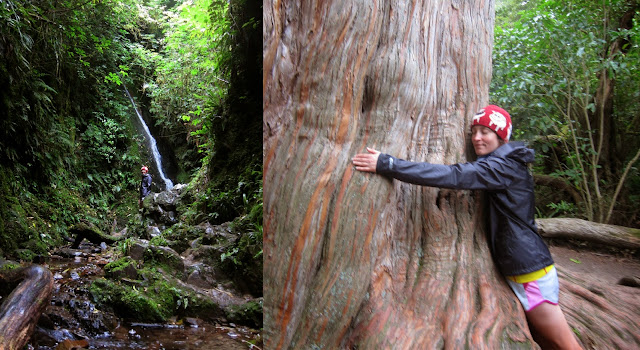 Making friends with the trees in Peel Forest

The next day was again rather drizzly and cold in the morning and was fairly uneventful apart from meeting a few cycle tourists all heading the other direction (it must have been because it was drizzling right?) and getting brain freeze from ice blocks in Mount Somers. I'm not sure why, on all the days when it was super hot, we never got ice creams or ice blocks and yet on such a cold day we did! 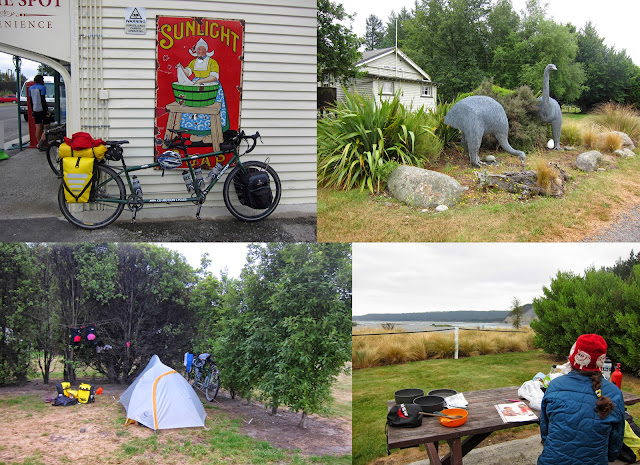 Clockwise from top left:The General Store at Mount Somers, Moas!!, enjoying the view at Rakaia Gorge, our campsite at Rakaia gorge. What you can't see is the amazing view over the river it had.

The whole way to the Rakaia Gorge until the final descent felt like one long gradual climb, sucking all the life out of my legs! But it is such a lovely campsite to stay at. The last time I was here was for Spring Challenge a few years back after we'd rafted down the river.

One more day to go and then we'd be home.

Left: desperately trying to get all my gear into my pannier one last time. Right: posing whilst overlooking the Rakaia river.

We woke up the next morning to thick mist, barely able to see more than a few metres ahead of us. Whilst cooking breakfast though it slowly started to burn off and blue sky was peeking through. The ride out of the gorge is a really nice little climb then it was long, straight, flat roads for ages. M was in semi time trial mode from the 22km to Hororata sign right the way into the town which was amusing but we made it in 41 minutes so he was happy and I was impressed as the wind was pretty cruel. We were making excellent time and were both feeling pretty good so we pushed on to Tai Tapu for lunch.

Feasting at The Store in Tai Tapu to celebrate before tootling home at last. I even convinced them to make me a massive soy milk shake...delicious.

After eating far FAR too much it was time for the final few kilometres to home on familiar ground. The Old Tai Tapu Road is where we ride the Tuesday night Time Trials most nights during the summer and it was kind of fun to be riding it without the pain and suffering we're normally feeling by this stage of the ride!

And then all of a sudden we were home. It felt kind of happy and sad at the same time because it had been such an amazing adventure but I had kind of missed our little house too.

Is it too early to start planning our next cycle touring adventure? 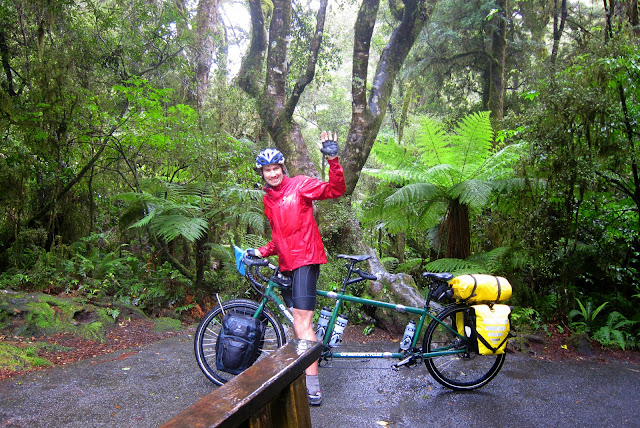 And one last bonus photo from our awesome adventure with the big green monster: M waving goodbye to the West Coast. I miss the coast!