In which the big green monster gets stuck on the wrong side of a river: Part One

After a bit of mad packing on Christmas night (desperately trying to cram everything in) we set our alarm for an early start the next day. I can't say I was thrilled to hear the alarm go off in the morning but we got ourselves underway, if not a little wobbly, and biked off to the train station for stage one of our adventure: the Tranz Alpine train journey from Christchurch to Greymouth.

I have always wanted to do this train trip and it was seriously cool (well, I do quite like trains!). I loved how you were provided with headphones which gave you commentary on the land and its history as you tootled along.

Arriving in Greymouth we then wobbled our way to the awesome Global Village Backpackers (definitely the place to stay in Greymouth) where we met an older German couple who were also cycle touring. We had a great time chatting away to them and getting excited about the ride ahead. As we discovered time and time again on this trip, our bike was certainly a talking point and all sorts of people would come up to talk to us. 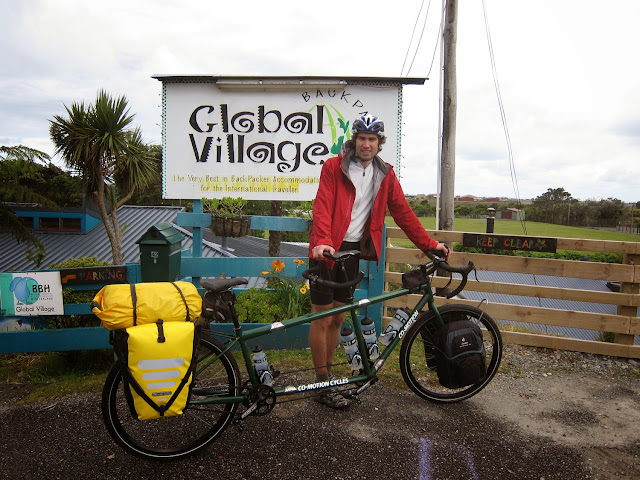 For our trip I'd basically linked together a selection of trips from the Kennett Brothers Classic New Zealand Cycle Trails book that took us down the West Coast and inland to Wanaka then over a couple of passes and through the Mackenzie Basin then back home again. Day One would see us start the West Coast Wilderness Trail which would take us to our accommodation for the night in the middle of nowhere, Cowboy Paradise. A nice easy day of about 70km or so mostly on gravel roads or cycle trail. 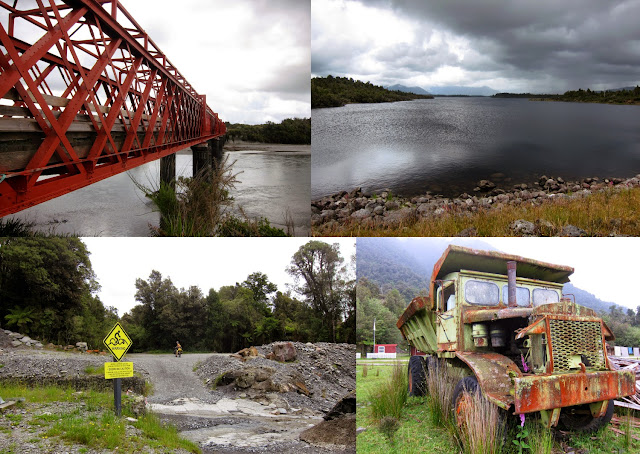 It was a bit overcast but a pretty nice riding temperature and we'd cruised along the coast from Greymouth and made it to Kumara by mid morning. From there the track turned away from the roads, cruising around the Kapitea Reservoir. It was beautiful and super quiet although we met another couple heading the same way as us and another couple heading the other way that we knew. Once we got close to Cowboy Paradise there were these ridiculously tight corners to get down the hill which were mostly definitely not tandem-friendly so we had to push round them (the ones we did ride I was squealing at the back!). We made it to Cowboy Paradise just after 2pm for a nice relaxing afternoon. An awesome and relaxing start to the trip. I should have made the most of it!

A weather bomb was supposed to hit overnight but it didn't really happen as far as I could tell. It rained a bit but nothing too serious (well, for the West Coast which is notorious for rain) and we woke to a light drizzle and thick mist. Exciting! The first part of the trail swooped down off the hillside through beautiful native bush to the river. We then climbed up and over to Lake Kaniere and along the Kaniere Water Race which certainly raised my heartrate. It would be an easy track to ride by yourself but the track is narrow and drops off steeply on one side to the river and to the water race on the other side and on the back of the tandem all I can see are dropoffs! Super beautiful though. 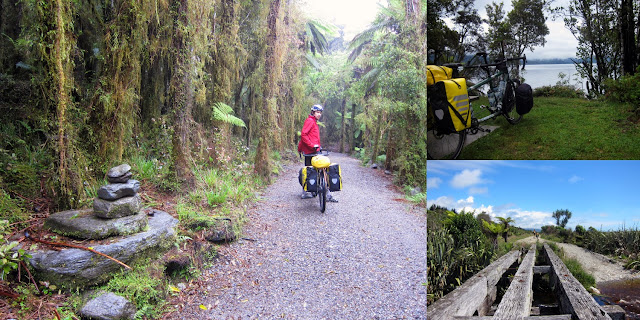 Before we knew it though we were in Hokitika where we attempted to cram more food into our bags from the supermarket and continued off into the now ridiculously hot and sunny afternoon. All was going so well with a beautiful track that cruised through the bush and a delicious picnic lunch. I should have known it was too good to be true because then came the final coastal section to Ross.

We knew there was a chance this section of the trail was not complete but according to our book it was still rideable except it was a grade 4 instead of a grade 2 so we weren't that surprised to see a sign just before the coastal section saying the track was closed then a sign on the gate saying the road was unmaintained and to enter at your own risk. It all just sounded like a challenge. It started off all fine except for the bridges weren't all rideable so we either walked across them or through the streams. But the track steadily became more covered in gorse and particularly swampy. Pretty tough going for a tandem with no suspension and packed to the brim. But again, nothing we couldn't handle (apart from my wrist becoming pretty sore but that is pretty much expected these days).

Anyway, with Ross in sight (the end of the trail) we came up to the final bridge across the Totara River...which was under structural repair and missing pretty much all of its floor missing apart from a very narrow plank and rather dodgy looking handrail. Not conducive to crossing with a bike and lots of gear. We tried to follow the side of the river out to the main road but were continuously blocked by endless rough, muddy farmland which seemed to end in scrub and more mud or the river, again. M also tried to see if the river was crossable but on the far side near the bank it became deep and fairly fast flowing. Not something to risk without knowing how deep it was, especially as we'd have to get all our gear and bike over as well. 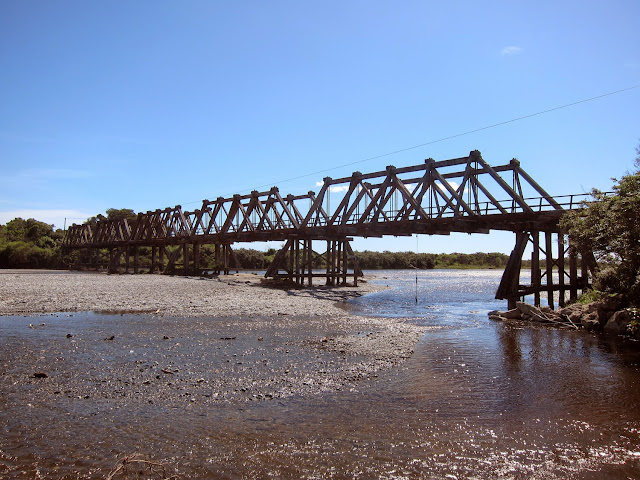 This photo makes the river look shallow...which it is at this point but on the far side it is much deeper (i.e. you can't see the bottom) and faster flowing

It was starting to get pretty late and we were both getting pretty frustrated as it was looking like we'd have to head back along the track again and ride round the road which would take several hours. Things were not looking good...