In which we bounce along the river bed and get ourselves pretty tired: Part Four

Omakau, in Central Otago, is a small town partway along the Otago Central Rail Trail. A couple of years we rode the trail with M's sister and some friends, managing to find the only 3 days of freezing cold rain during a long stretch of ridiculously hot weather. This time the sun was most definitely out and we were loving a bit of easy riding and all the friendly people on the trail including these two Aussie ladies with the most awesomely cute Bike Friday bikes. 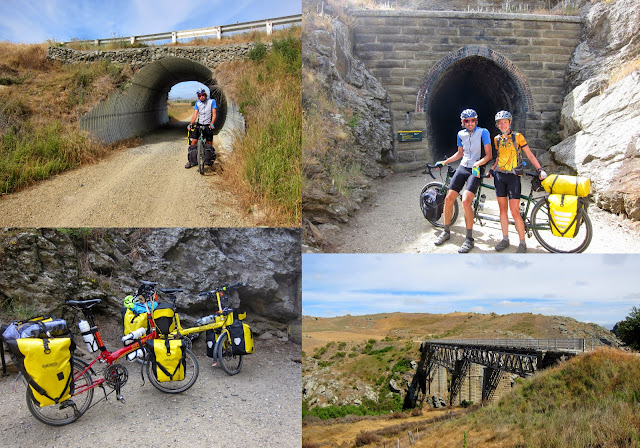 The Otago Rail Trail with the Poolburn Viaduct (bottom right), one of the tunnels on route (top right) and cool bikes (bottom left).

We were only riding the 29km from Omakau to Oturehua before heading off towards the Omarama Saddle but I think it's probably my favourite section, with a cool long tunnel and the Poolburn Viaduct. Plus there is a very cool General Store at Oturehua. After a delicious early lunch we set off in the direction of St Bathans. A few kms before St Bathans is the turn off towards Oteake Conservation Park. The gravel road felt like it went on for ages but we finally reached the Homestead campsite where we lazed under a tree eating chips for a while to recuperate a bit.

From there we headed up the valley on the West Manukerikia Track, aiming for Top Hut at the bottom of the Omarama Saddle. The track was pretty good for the first 3km to the junction then got pretty bumpy and rocky with many stream crossings (over 20!) we pushed through. I don't think we could have gotten the tandem through most of them even if we'd tried. The water was super refreshing though as it was pretty hot by now. 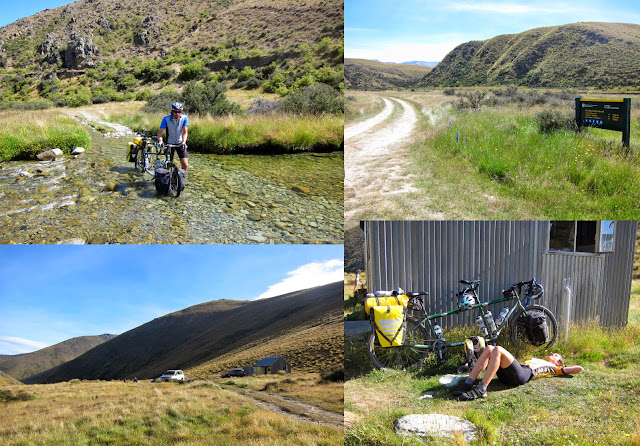 A gorgeous day on the West Manukerikia Track.

We made it to Boundary Creek Hut after about 1 1/2 hours with lots of daylight remaining so continued on the next 8km to Top Hut which took us another 1 1/2 hours. We were both exhausted by this point and super excited to reach the hut.

I have to say, this track was definitely pushing the boundaries of what our bike is capable of! Fully laden with no suspension makes riding across all those rocks was pretty rough going! Can we get a dual suspension mountain bike tandem please M?!!

We'd discovered my mountain bike shoes were falling apart so the left one had to be held together with electrical and strapping tapes! They have had a good life though, lasting nearly 8 and a half years, with the last few years definitely being thrashed.

Anyway, what's the best way to start another day of cycle touring? How about climbing nearly 300 metres in just over 1.5km! Definitely got the lungs working! We did have to push a little bit when we wobbled a bit out of control on the rocky track but otherwise the tandem seemed to be loving it! The descent on the other side however was a bit rough going for our poor brakes, being over 600 metres of steep, rocky gravel. Exhausting! Although a few years ago we rode our mountain bikes up this side and onto the ridge above the saddle (only to have to turn around due to icy snow on the tops). 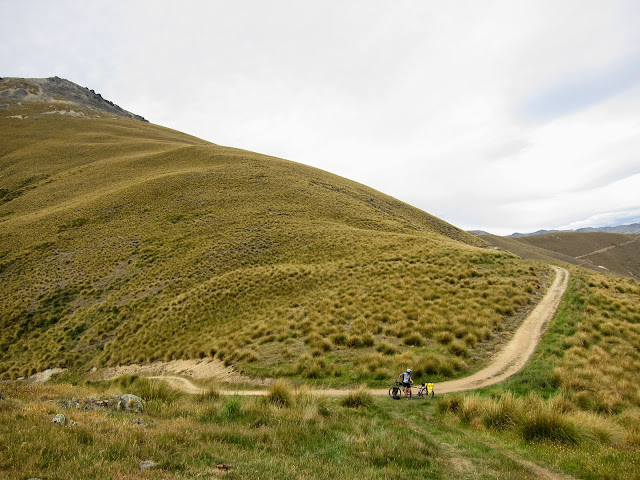 Letting the discs cool down (and admiring the awesome scenery) on the descent from Omarama Saddle.

By the time we arrived at Omarama the heat was getting a bit riduclous and it wasn't even midday yet. We gorged on fresh stone fruit and tried to cool off a bit before setting off onto the Alps 2 Ocean Cycle Trail towards Twizel. This is where a lack of reading the notes caused a bit of grief. For some reason I'd managed to mistake the trail distance to Twizel as being only 40km from Omarama but not long after we set off on our way I realised it was actually 80km! You know, just a small difference when it was already 1pm. Now a sensible person would be like, yeah, let's stay at Lake Ohau instead (40km) but sometimes I am far too stubborn for my own good so Twizel it was, no matter what!

We were doing the trail backwards from Omarama to Tekapo which meant it was basically heading on it's way up. The trail heads inland towards Lake Ohau via a pretty awesome single track around the base of the Ohau Range with about a 400 metre climb to its highest point (going our direction). Fortunately it's a pretty nice gradient and flows really nicely. But I was still pretty tired by the top. We then had to do some bike maintenance as the front brake pads were wearing pretty thin (VERY thin). We didn't have any spare ones (the list of spare parts we should have had with us was growing by this point!) so M just did a switch which got us down the hill okay but he took things pretty carefully just in case. 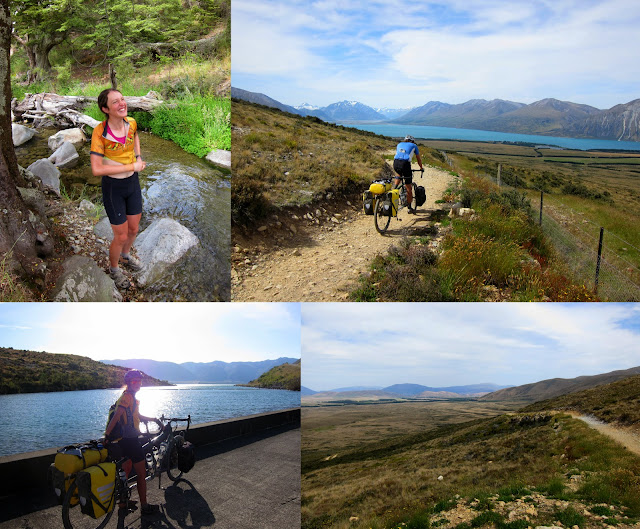 A hot day on the Alps 2 Ocean Cycle Trail (so hot that dunking your cycling top in a freezing cold stream was essential to stay sane).

I was grumpy and tired by the time we reached Lake Ohau Lodge but a bottle of ginger beer did help a bit. We then headed off along the super whizzy single track around the edge of the lake. It was fantastic, even for someone as tired as me! Then M got into time trial mode for the last 20km along the canal road into Twizel! After a delicious dinner from the local Thai restaurant M was super kind and got us a cabin for the night so I could attempt to recover!

After a lazy morning then some more bike maintenance (we managed to find one set of brake pads - yay!) we were on our way again, just in time for the heat of the afternoon! Because we were both pretty tired it was a pretty cruisy ride from Twizel to Lake Tekapo via the Alps 2 Ocean Cycle Trail which was mostly on a gravel track around the edge of Lake Pukaki then along the canal road into Tekapo. Despite being a short day my legs (and bottom!) were feeling rather shattered and I was too tired to go for a swim. 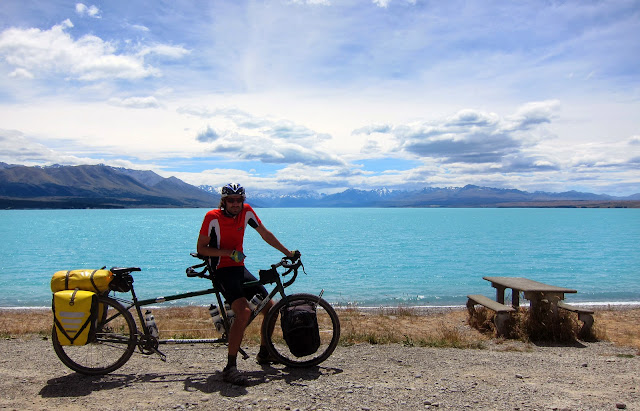 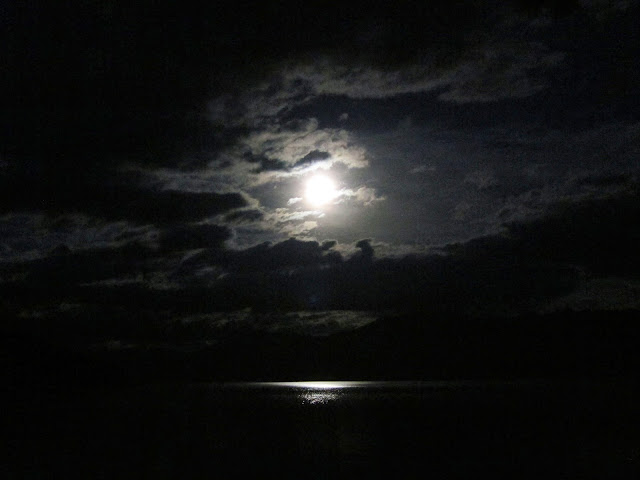 A bonus picture by M from Tekapo in the evening. Looks a bit spooky!

We'd really put our tandem to the test and somehow it had survived mostly intact but with 4 more days to get back to Christchurch and 2 very tired people (no rest day is a really stupid idea!), it was all beginning to feel a bit too much...