It's a cheezy life

It had all happened too quickly for thought, ruined in January, married in February, on a boat to the tropics by March. The future had seemed unimportant compared to the exigencies of the present.
- The Betrayal of the Blood Lily by Lauren Willig
It's been all go round here and more than a little stressful. I need more sleep...or more hours in the day! It's less than a week now till the first of a run of big races all in a row. Time to start getting a bit more sleep and making sure I've got all the gear. First up is this. It's gonna rock!

Anyway, the other night The Chef was round for dinner and I felt inspired to make something more exciting than stir-fry which seems to have been the staple of late. I decided on something I haven't made in, well, ages when I think about it, Vegan Mac n'Cheez, using a halved version of this recipe. 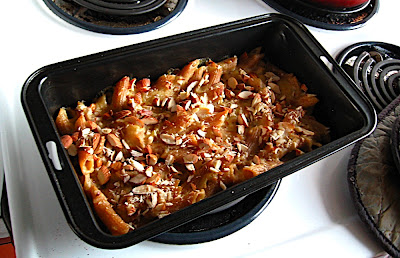 I ditched the 2 pot method and just mixed the ingredients for both sauces in one pot and it seemed to work fine. I also added some fried up onion. For some reason it just wasn't as exciting and delicious as I remember it being but then again I think my tastebuds have changed a lot since then. That's not saying it wasn't tasty but I guess I'm not such a fan of something so creamy anymore. It's still going to be my go-to mac and cheese recipe though. 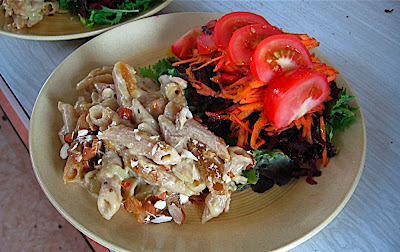 The salad was ridiculous...The Chef had brought round a beetroot from his garden and we grated the whole thing so the challenge was to eat all of it (which was a HUGE mound). You can't see just how much is there from the photo since it's hidden near the bottom but just take my word for it. Ah well, fresh grated beetroot is amazing but it gave me a stomach ache afterwards.

Afterwards we curled up on the couch with my flatmates and started watching The Great Gatsby. I was most upset that I fell asleep after about 5 minutes 'cause I was so exhausted. Will have to try and watch it again another time!

Oh, and one last thing...if you're in Auckland go down to The Library cafe and check out the new vegan option on the menu (as lobbied for by The Chef). I'd tell you what it is but my memory is terrible...all I remember was it was something to do with quinoa. I haven't been yet to try it out but I'll review when I finally get a chance.