Currently in my little kitchen there is Christmas cake in the oven and Christmas pudding on the stove along with a batch of delicious peanut butter cookies on the bench. It's beginning to smell a lot like Christmas in my kitchen!

Speaking of food, I never got around to blogging about my American food experiences so you'll have to put up with it now. It was a bit of a mixed bag to be honest. I went in with high hopes and they were dashed pretty quickly when we couldn't find bread that tasted, well, anything like the bread we know and love here. It was hard enough trying to find bread without dairy in it and when we did it had a weird texture and tasted sweet. Ugh.

In Boulder M and I did a lot of our shopping at Alfalfa's as it was close to where we were staying (Chautauqua which was amazing as we were right at the start of the trails leading up into the Flatirons - although an hour and a half run in the hot sun the morning after we arrived might have been a bit much for my jetlagged body!). The variety was pretty cool but it did make me appreciate what we have at home. I really wanted to be a fan but couldn't.

We had more luck at restaurants and cafes though. One lunch I got a takeaway reuben sandwich (it sounded very American - I've never seen anything like it on a menu in NZ) from Leaf which was pretty good. Different, but good. 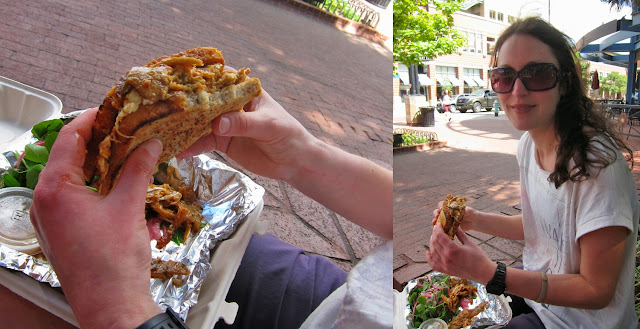 We checked out Wholefoods in a few places...they are so huge it was a bit frightening but the salad bar things are pretty cool!

There is also a pretty impressive range of vegan frozen desserts in these type of places, of which we tried a couple... 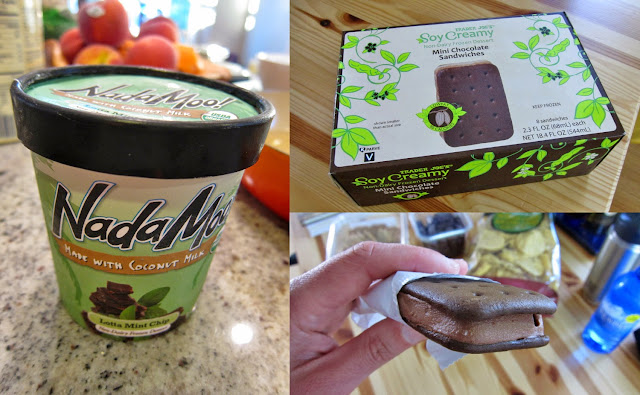 Once in Salt Lake City we attempted to visit every vegan eatery in town (well, all the ones that were open during our stay). First up was the Vertical Diner. After spending far too much at REI (not for the first or the last time on our trip!) A then took us there for lunch. I loved this place from the moment we walked in. The menu is fun and the food was super yummy. I wished we could have gone back. 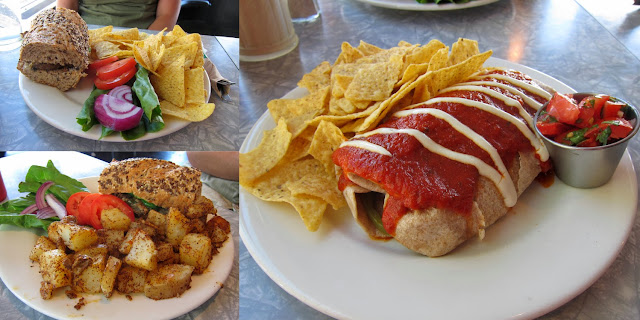 Clockwise from top left: a burger but I can't remember which one, Jerk Chicken Burrito and another burger of some description!

Dessert was definitely a must (hey, we had to try as much food as possible!)...

A banana split sundae and a strawberry brownie sundae - delicious.

Next up was the City Cakes Cafe for lunch whilst exploring Salt Lake City on our own. This place looks like it provides a lot of the vegan cabinet food we saw in other cafes and Wholefoods in the area. The lemon bar was delicious but I wasn't a fan of the more lunch-type food we ordered.

One evening M and I headed into town to Sage's Cafe a more fancy dinner. M ordered the mushroom stroganoff and I ordered the raw cashew pad thai and we agreed they were both exceptional. Plus the service, from memory, was excellent. If you find yourself in Salt Lake City I would really recommend Sage's. 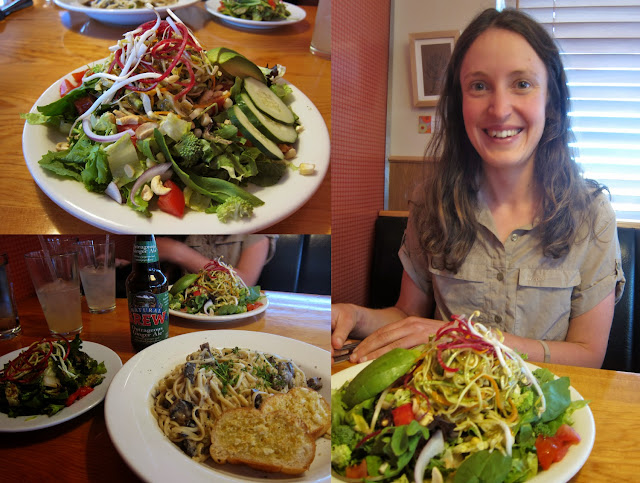 The final cafe I checked out was the Frisch Compassionate Eatery where I got the special of the day which was some kind of spicy 'chicken' nacho dish and the most giant cookie I have ever seen in my life! The nachos were pretty good but I think I would have preferred plain beans to the mock chicken and by the time I came to eat the cookie I think I was over sweet food. The menu here looked pretty awesome though. 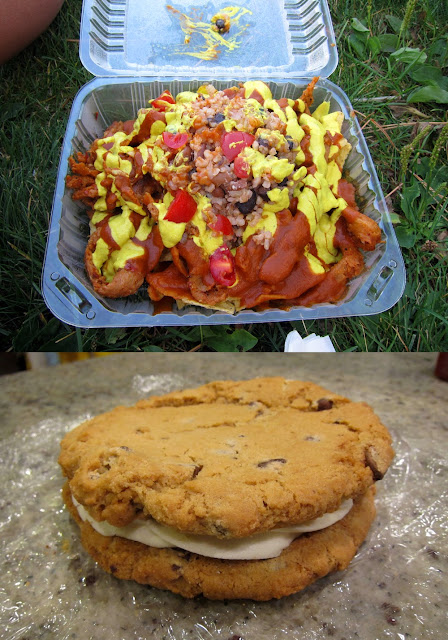 You couldn't really go wrong with Mexican though, even in the City Creek Mall. And corn chips here are so much more delicious than most we can buy at home. 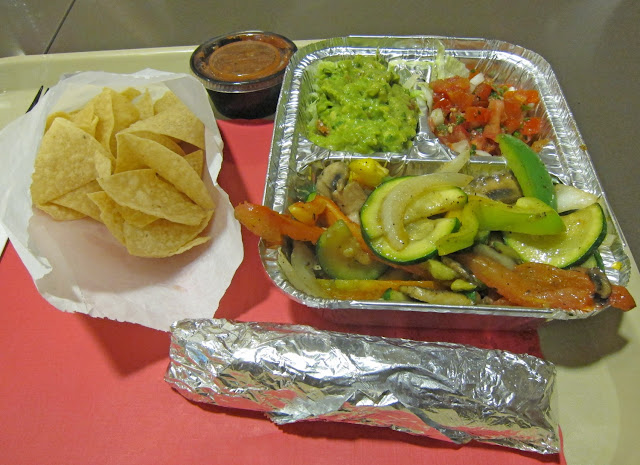 On the whole though we did most of our own cooking. After Boulder we camped in Leadville for some altitude training before the rogaine (when you live at sea level it's a bit of an adjustment!). 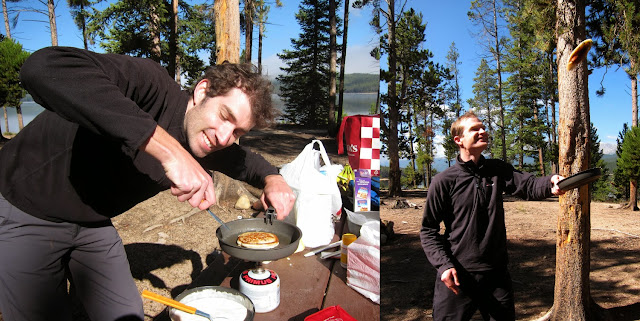 The first morning we cooked up some terribly awful pancakes made from some boxed mix we found at a supermarket. They may have looked all fluffy but they tasted pretty awful! But the boys did try their hand at flipping them much to our entertainment.

Camping by Turquoise Lake was beautiful with the added bonus of a track going right past our tent for an easy morning run...followed by a swim in the lake.

Back in Salt Lake City we made pizza once my parents arrived and I got to try out some vegan cheese. It sort of melted but not like some of the pictures I'd seen and it kind of tasted a little bit plasticy (am I being too fussy here? Give me some of the European or British vegan cheeses any day...I don't care if they don't melt). The pizza was delicious though despite the cheese and the weird mock bacon we tried.

The best food of the whole trip though was definitely all the fresh summer berries, especially when out adventuring...or lazing in the sun! 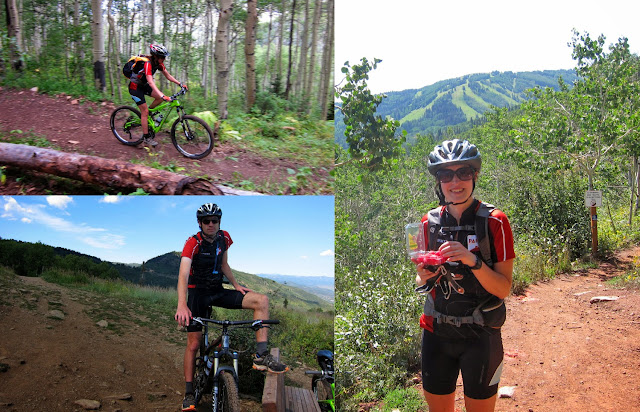 Mountain biking in the hills above Park City. Perfect riding for me as it started with a big long climb up to the top (and then a punnet of raspberries of course!). 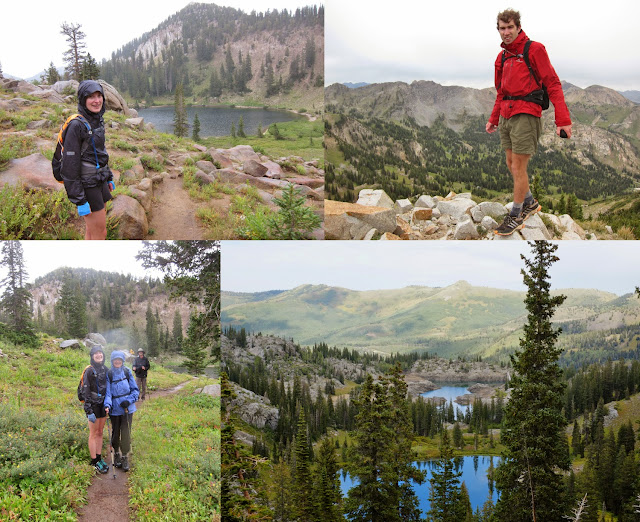 Exploring Mt Wolverine in the rain then meeting my parents and R checking out all the lakes. 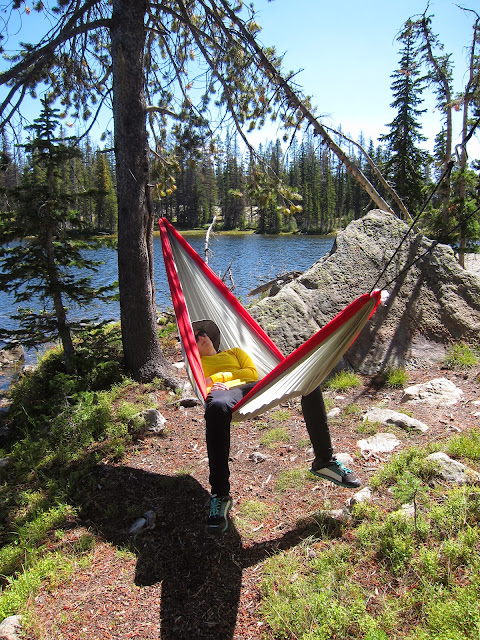 And the best bit? Lazing around by a lake after eating far too many berries (if that is actually possible).

There, no more USA trip posts now. I think I'm done (and now hopelessly behind on everything since then!).