Keeping out the predators

"You must keep your feet grounded so firmly on the earth that it's like you have four legs, instead of two. That way, you can stay in the world. But you must stop looking at the world through your head. You must look through your heart instead."
- Eat, Pray, Love by Elizabeth Gilbert
As I said in my last post, I had a friend come visit me for the weekend...after picking M up from the airport we thought we'd go roam the supermarket because that's what people do on a Thursday night right? Amongst other random buys (chocolate was the essential reason for the supermarket trip) I discovered this packet of chips in the International isle. I mean, how could you possibly pass up a flavour of chips called Mrs H.S. Ball's Chutney? What could possibly be more appealing?! 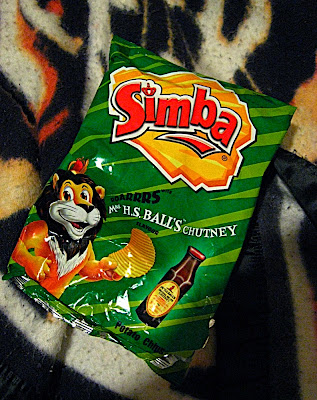 We ate them all on the car ride home. Of course, this might indicate that they were delicious or something. Rather they were weirdly sweet (well, they were chutney flavoured after all) but awfully addictive...if that makes any sense.

We went out for breakfast but I didn't take my camera which was pretty slack but in my defense we actually weren't planning on breakfast (well, we were...just not right then). Because neither of us checked out the address of our morning destination carefully enough we had to postpone morning plans till later and go eat before I turned into a monster. So we went to Raw Power since we were in town and I had their tofu scramble. It's really good...but clearly camera-shy because every time I've had it my camera has, well, not been there. Oh, and we may have had a giant melting moment cookie as well but that might just be a rumour.

I do, however, have a photo of lunch...which isn't exactly pretty but still tasted good. I suspect that after biking out to Kumeu most things would have tasted quite good though. 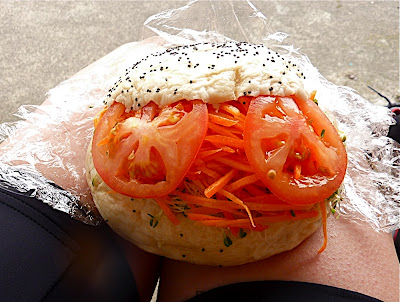 We had to retreat to a bus stop to hide from the wind and rain. Typical Auckland (there was blue sky in the morning, then it rained, then it was blue sky again...repeat until you get exhausted...but the weather never does). 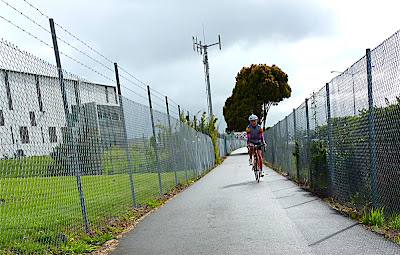 And then we biked home again...

We were up at my beach house the next day (after arriving late at night from basking in the Waiwera Hot Pools until we turned all wrinkly) and for breakfast I made us both the Banana Flapjacks from Vegan Brunch. They turned out really delicious (between the 2 of us we easily polished off the whole batch) but I really need a non-stick frypan because I was wrestling with the old cast iron one which was determined to destroy all remnants of a good mood. Luckily I'd given M prior warning that I was likely to turn into a monster when it came time to try and turn them over so he didn't panic when I started cursing. 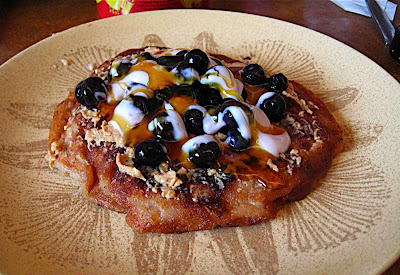 Served with peanut butter (well, mine was anyway), blueberries, soy yogurt and golden syrup. Quite awesome.

Fuel before heading up over the hill to the reserve for running drills... 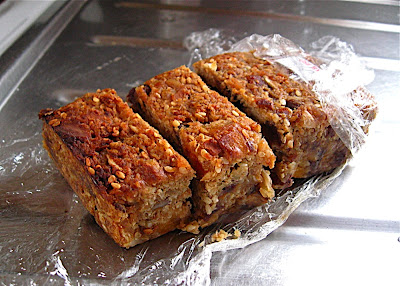 This is a muesli bar from my local bakery. They are awesome (the bakery specifically but also this muesli bar)...heaps of vegan options and if you are avoiding wheat or gluten, well you have quite a few choices too.

I attempted to climb the predator fence in an attempt to get out of doing the drills but M was having none of it... 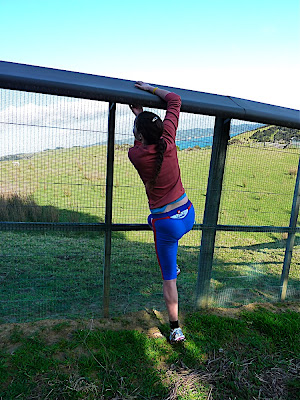 ...okay, who am I kidding?! You don't have to drag me out for any adventures (as for the predator fence, Tawharanui Reserve is a penninsula protected by what they call the predator fence to keep, well, predators out...turns out it keeps humans out too if you don't cross at the proper gates so I guess that makes us predators as well)! 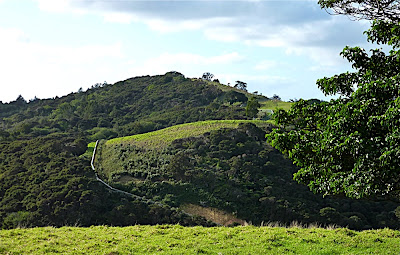 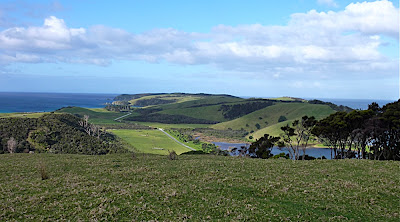 By the time we got back it was after 4pm and we hadn't even had lunch! Emergency refueling was called for before I either passed out or turned into the monster from hell (is this a recurring theme for this post?)... 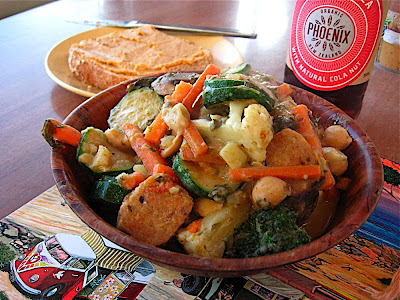 A big bowl of stir-fried veggies and tofu sausages mixed in with a packet of curry/soup (it tried to claim it was both which was a bit confusing) and served with spelt toast smeared with my Mum's kumara and sundried tomato hummus. Oh, and a bottle of Phoenix Cola. Can't go wrong.

And then it was time (well, after lazing on the couch and watching the news about the earthquake in M's hometown which was a bit scary) to head back home which is always a bit sad. I'd like to stay up at my beach house forever.