Hello! So sore, so tired. Don't go doing a half marathon just a week after giving it your all doing a 100km cycling race! But I'm getting ahead of myself (this is what happens when you get behind in posting!)...

Since moving to Christchurch (nearly 4 years ago now - time flies!) I had always wanted to do Le Race, the 100km road cycling race from Christchurch to Akaroa. 2015 was my chance, with M keen to tackle it on the tandem with me.

We've been putting in plenty of "training" (i.e. going for the usual fun rides round the Port Hills and the odd adventure further out on the Banks Peninsula). You don't get photos because I'm too busy riding :-P

Then on Tuesday nights during daylight savings we can usually be found at the CTTA time trials, a 16km there and back time trial along Old Tai Tapu Road. It's tough, especially for those of us who'd rather be riding up a hill than riding on the flat, but fun (well, once you've finished)! 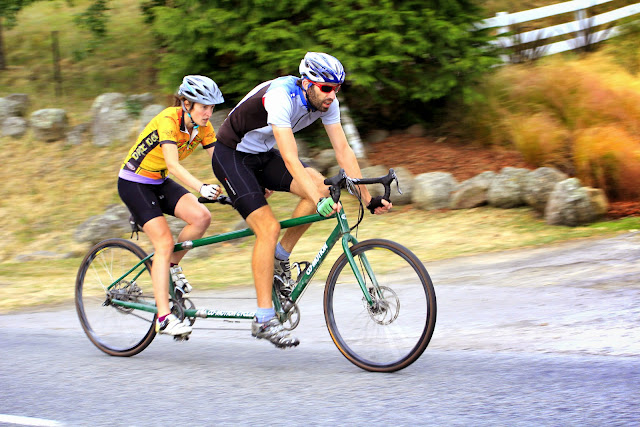 Giving it all we have at the CTTA time trials. Photo credit: Christopher Innes Photography.

Once a year there is also the 16km hillclimb time trial from the Blue Duck cafe up to Gebbies Pass then up the Basdrat (M's anagram for what most cyclists normally call it - I'll let you work that one out) then along the tops to just past Kennedy's. It is brutal but we got a new PB this season which was exciting even if it might be partly down to perfect weather conditions.

Obviously there was a lot of cycling over the summer holidays with our cycle touring trip. We'd also been out making sure we were familiar with all parts of the course. Well, M was pretty familiar with it already but the tandem is a different (much heavier!) kettle of fish.

It was still going to be a tough race. Le Race is definitely not a tandem-friendly course, that's for sure (tandems are not the greatest climbers, especially as it gets steeper and Le Race is definitely not a flat race). Unfortunately I'd managed to slip over and injure my back at an afterwork rogaine on the Wednesday and was still in some discomfort so the goal of getting under 3hrs 30 became a goal to finish before midday (4hrs).

We positioned ourselves by the 3:30-4:00 sign which did make for a bit of a slow start but once we got going it was pretty cool to be whizzing past everyone along Colombo Street, and still continuing passing riders heading up Dyers which surprised me as I always expected to get dropped on the steep climbs. Once along the tops it started to get pretty misty and cold with the visibility decreasing rapidly. I was glad I wasn't the one steering! Fortunately we emerged out of the mist before heading down the Basdrat (and the dreaded cattlestops) to Gebbies. We hit the flat at high speed and in good time which was exciting! Plus M's parents were there cheering us on! And then the real hard work began...

There was a bunch of about 6 of us to start I think which took a while to get itself organised while we spent a lot of time out the front in the super strong easterly wind. Finally the bunch got working and that was quite exciting, having never ridden in a bunch before. Our bunch slowly grew as we caught more people and we were slowly closing in on the bunch ahead as we made it to Little River.

I fully expected us to get dropped on the long (long long long!!) climb up to Hilltop but it was quite the opposite with us even overtaking some of the bunch ahead of us. Unfortunately the climbing wasn't so good on my back and the pain was creeping in. But M was still on form and we were flying along once we got to the tops. But then the lack of sleep caught up with him and it was up to me to keep us going! There are so many steep, energy-sapping climbs along the Summit Road after Hilltop and it was really taking it's toll. Add on the wild winds attempting to blow us off the road (in these conditions there are some benefits with being on such a super heavy bike!) and it was fast turning into a bit of a miserable experience! The tops went on and on and by the last couple of climbs I had nothing left in my legs. Thankfully M had recovered a little bit by then otherwise I might have had to get off and walk!

I was a little worried about the descent down Long Bays Road as it is super steep and has quite a few reasonably straight sections meaning we can pick up quite a bit of speed (cornering is another thing tandems aren't so good at) but it was really quite exciting passing people going down Long Bays Rd (and yes, quite terrifying too at that speed!). It was pretty windy on the descent so our weight probably helped us be able to go faster and stay in control compared to the other riders. 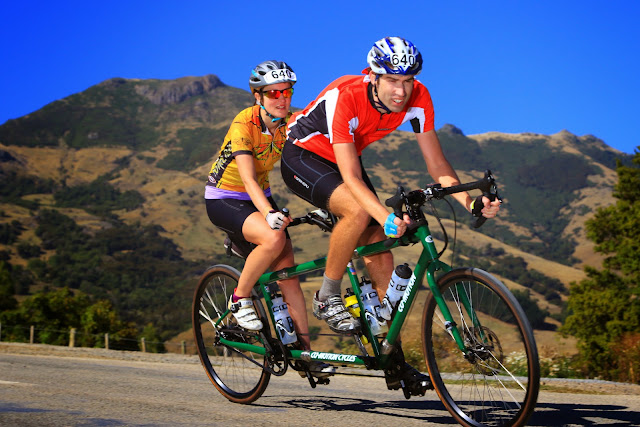 On our way down Long Bays Road and nearly finished - I may look relaxed but let me tell you, I am anything but calm! Photo credit: Marathon Photos.

I was so excited to reach the finish. I'm not a natural cyclist and it's taken an awful lot of work to be able to ride a bike at all. After my mountain bike crash a couple of years ago I had struggled a lot with the fear that used to cripple me earlier when I would go riding and the frustration of not being able to ride in the same way that I used to. I am so thankful for M putting up with me (and my occasional screams!) on the tandem.