Not a book quote today but instead a poem that is read at every ANZAC service across the country each year. Tomorrow, April 25, is ANZAC day, the day we, as New Zealanders (and Australians) recognise and remember those soldiers from the Australian and New Zealand Army Corps who fought at Gallipoli during World War I. It is not only a time to remember these soldiers, but all soldiers who have fought in many of the wars across the world since then. Every year there will be dawn services across the country and on our shirts we will pin our red paper poppies. My grandfathers, both long gone, fought in World War II. They never told us stories of the war as was the case with many soldiers who kept their horrific experiences buried deep inside once they returned.

I won't be at any dawn services this year as I'll be travelling down country for more madness and mayhem but I did make some ANZAC biscuits for the day. These are fairly crisp biscuits characterised by rolled oats, coconut and golden syrup. The original recipe (probably quite different from the kinds of recipes we use today) was apparently created so that the biscuits would keep well during naval transportation to those soldiers fighting overseas. 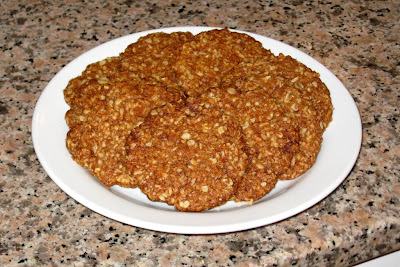 Preheat the oven to 160°C. Line a baking tray with baking paper.

Place the oats, wholemeal and plain flour, coconut and sugar in a large bowl. Mix and set aside.

Place the baking soda, golden syrup, oil and egg in a small jug and whisk to combine. Add to the dry ingredients and stir well.

Roll teaspoonfuls of the mixture into 3cm balls. Place balls 4cm apart on the baking trays and flatten with a fork.

Bake for 15 minutes, until golden. Allow to cool on the trays then store the biscuits in an airtight container.