He tells her frequently he loves her best first thing in the morning when her hair is messed up and her face scrubbed clean. He loves her in old sweats, baseball caps, and his oversized sweatshirts. That's how she looked when he fell in love with her, he tells her, seeing her at meetings looking as if she had just fallen out of bed.
- Second Chance by Jane Green
I normally have Fridays off (unless it's chaos at work which has been happening of late) so that leaves me with a 3-day weekend...every week. Oh yeah!! This weekend was fueled by food (shouldn't they always be?)!

It all started on Friday lunchtime when The Chef and I met up with my awesome cousin D at Revive. 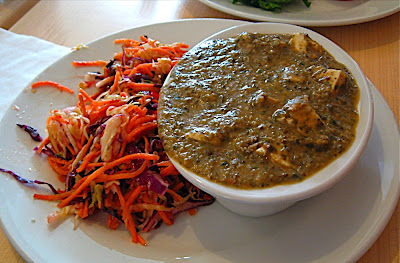 I got the hotpot of the day (Urid Dahl with Spinach and Tofu "Paneer") and the Bangkok Slaw. Yeah I know, pretty much every time I go to Revive these days I end up getting the slaw but it's so good that I can't resist.

Clearly on an 'eating out' run, we hit up Blue Bird for dinner that same day. I got the Hing Pie (rice and various veggies I think) with peanut sauce and salad. 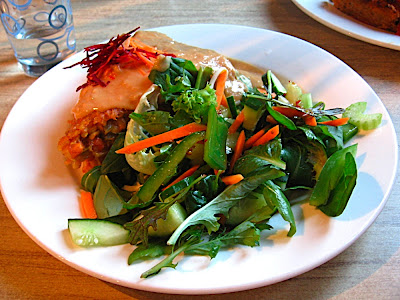 Oh man, this was real good (hmmm, peanut sauce...how could I possibly resist!). I was also tempted by their chocolate cake but somehow (I don't know how) managed to resist...crazy!

Then on Saturday we braved the drizzle and grey skies and hit the Oratia Farmers Market in West Auckland. I love Farmers Markets but I don't go to them as often as I should. Actually, I haven't been to one in ages so it was all rather exciting!

As well as getting a selection of stuff to make lunch and dinner we also got some (sweet) steamed cassava. 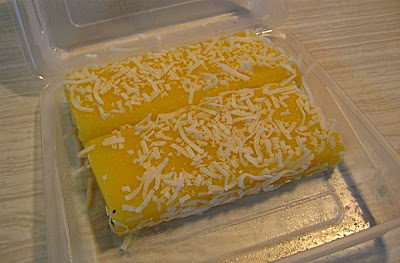 I think it is basically just cassava and sugar with coconut on the top but whatever it is, it's delicious! They also had steamed rice which was pretty good (rice, sugar, coconut) but this was the best.

The Chef also bought me some nice New Zealand olive oil from one of the stalls. They had two different flavours...a grassy one and a peppery one. At first I liked the peppery one best but once that flavour hits the back of your throat (a few seconds later) it was a bit much so I went with the grassy flavour. It's amazing drizzled straight onto your salad (as long as you're not super clumsy like me and tip way too much on). The oil is made by a company called Goose Creek and is super local. They are based up at Huapai which is about 40 minutes drive from my place. 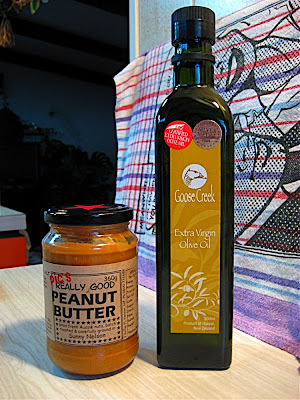 I also picked up some Really Good Peanut Butter. How is it possible that peanut butters can taste so different from each other when their ingredients are just peanuts and sea salt? This particular one is incredibly strong and rich. Definitely not for the faint hearted!

So by the time we got back from the market we were pretty starving so lunch was a quick salad with tomatoes and snow peas from the market and beetroot, carrot and lettuce from The Chef's garden. Some almonds from my fridge and a drizzle of the new olive oil and it was just perfect. 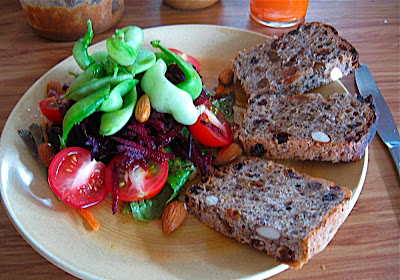 We also had a 5-grain fruit and nut bread (also from the market and mine was smothered in the new peanut butter of course) on the side. I could have eaten half the loaf in one sitting it was so good. It didn't even need anything on it but peanut butter is addictive.

I forgot to take a picture of dinner but here are some of the leftover Maori potatoes The Chef cooked up. 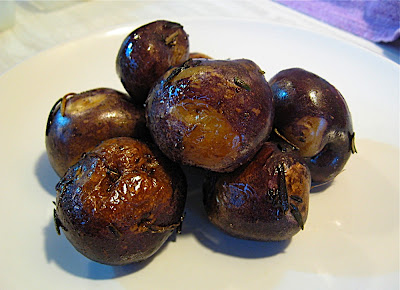 Boiled, then fried with a dash of oil and some rosemary. I'm not normally a huge potato fan but these were really delicious. I'll have to go back and get some more!

The Chef was working all day and into the night on Sunday so my lovely cousin D and I decided we'd have a girly Valentines Day together instead. After a quick blat round the bike park (and spinning out on a root, landing in the wet sand) I picked her up and we headed off to lunch at The Library... 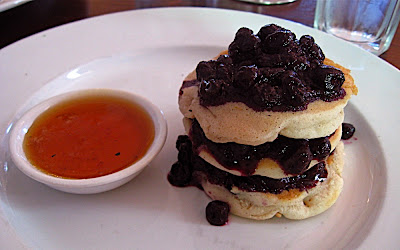 ...where I had pancakes again and ended up on a major sugar crash (seemed to skip the high and went straight to the crash unfortunately). Not a good idea...but they tasted good!

Then we spent the afternoon curled up on my bed watching 2 girly movies in a row while devouring popcorn and chips (I think our eyes were about to pop out of our heads at this stage)! After all this we were hankering for some real food so I cooked us up some dinner. 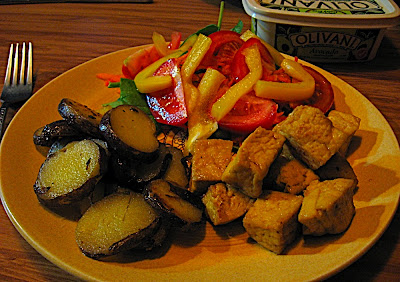 I sliced and fried up the leftover maori potatoes from the night before and served them with lemon tofu chunks, salad (where I practiced my oil-drizzling skills) and a ginormous corncob each (unpictured in case you hadn't worked that out). Very tasty. After this we were completely stuffed...but incredibly satisfied. Perfect!