Memories of cupcakes and pizza

Though Eric's tone was light as a marshmallow, his meaning was a sharp blade hidden inside.
- From Dead to Worse by Charlaine Harris
I'm having one of those weeks where my head is whirling all over the place and I'm feeling a bit overwhelmed with the number of photos I have sitting around to be blogged about but we'll deal with that another time. Instead we'll just take a little time-travel back to Sunday because I can actually remember that far (anything earlier has merged together!). On this particular Sunday my best friend B was up visiting me. It was also daylight savings (the one I always dread 'cause you have to turn the clocks forward an hour) which may account for the fuzziness of my brain.

Anyway, after getting up super early (and of course it felt even earlier with the whole daylight savings thing) for a training ride out to Kumeu and back, B turned up at my place and we cruised over to Kokako for breakfast. I was starving by this stage which wasn't surprising. 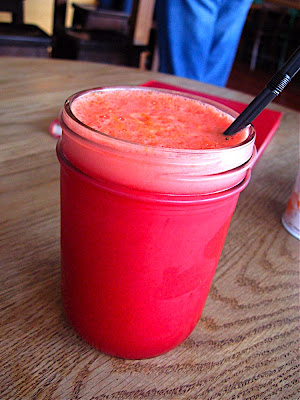 I love their vege booster juice which is, apparently, a combination of carrot, celery, beetroot and ginger. Seriously, it is quite possibly the most delicious juice ever although I did adore the green juice I had at The Lotus Heart.

There really isn't that much vegan food on offer at Kokako despite it being a vegetarian cafe but the tofu scramble is good and is generally my usual order when I come here. It will fill you up. 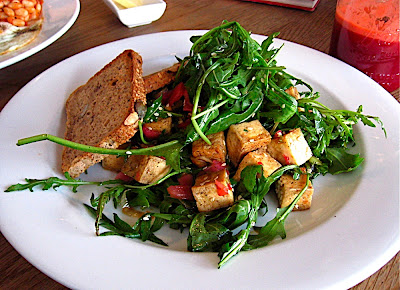 On our drive home B spotted the Kraftbomb sign and I realised I'd always wanted to go (I also realised that it's just down the road from my house) so we swung the car around and went inside. Ooo, vegan cupcakes from the NZ Cupcake Queen!!! 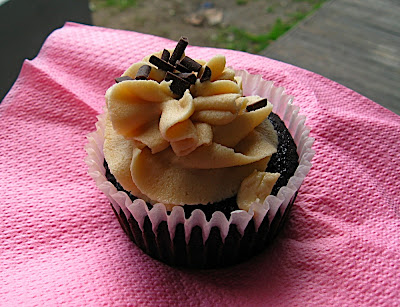 I was very unoriginal and got the peanut butter chocolate chip one...typical. Maybe next time I might branch out to one of her more exciting flavours?

It is a bit tragic but we ended up eating a sort of lunch in the car from food we picked up at Huckleberry Farms (there was an apple here as well...not just pie!). 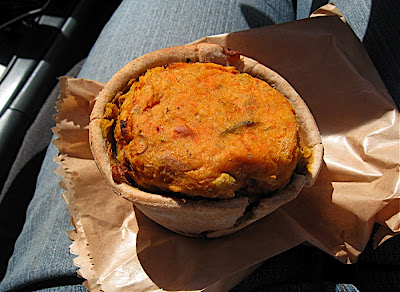 Then it was time to make the drive over to the shore to catch up with our friend E. I made the boys epic pizza... 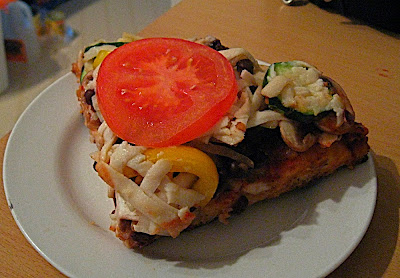 Well, I did eat more than one slice, 2 slices in fact, but E's place was lacking in decent-sized plates so I drew the short straw and ended up with this tiny plate! This pizza was piled a mile high with vegetables and was of the knife and fork variety. We spent the rest of the night watching movies, eating cookies (good old Oreos!) and drinking tea. Awesome.