Saturday was the first of 2 mountain bike rogaines in the North West Rogaine Series. Although rogaines are often confused with orienteering, they are actually quite different (well, from my perspective anyway). Yes, the majority of people who compete in rogaines are orienteers of some sort because the skill-set is similar. But unlike an orienteering event where you must make your way around a set course in the fastest possible time, for a rogaine you are given a time limit (in this series it's 90 minutes but they can get up to 24 hours) and a map with all the controls on it and you have to try and get as many as you can in that amount of time. The controls are worth different amounts of points as well. All those from 30-39 are worth 30 points, 40-49 are 40 points and 50-59 are 50 points. The winner is the person with the most amount of points. If there is a tie then it is taken on the fastest time. There are also points deducted for every minute (or part minute) you are late (20 points in this series).

Anyway, this first event was a mountain bike rogaine held out at Riverhead which is notorious for being a mud bath because of its clay base. Apparently it's been brilliant and dry all summer and even last week it was supposed to be perfect riding conditions but, of course, in the days leading up to the event the rain came. And to make matters worse it was raining before the race too! Yep, it was gonna be muddy. 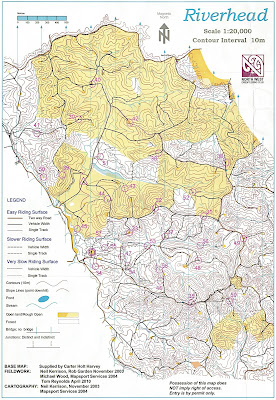 I'd never done a rogaine on my mountain bike before and I'd also never ridden at Riverhead (I'd done a 3-hour foot rogaine last year when the weather had been so mad I was up to my chest in watery mud at one point) so I was pretty apprehensive. Rob wasn't very encouraging either when he came up and told me I was gonna hate it (I love his methods of encouragement)!

Yeah, I wasn't too happy with my route choice in the end but I enjoyed it a lot more than I expected. I should have left more time for the controls in the bush nearer the event centre but I'd missed most of them out thinking that because they were single-track I would struggle in the mud. Turns out the couple I did manage to get to were beautiful. Damn it! There was a really frustrating part where I'd pushed the bike up this narrow single track through the gorse (should have gone round) and the clay had completely coated the bottom of my shoes so I had to attempt to scrape it out so I could clip back in once I started riding again.

It was quite a mission cleaning up the bike afterwards...took me a good hour of scrubbing 'cause mud was everywhere and by the time I'd got home it had started to dry off and clay does not want to be moved once it's dried. The shoes took another half an hour. Afterwards I realised I'd forgotten about my camelbak and mapboard which were also splattered in mud. Guess that's a task for tonight! 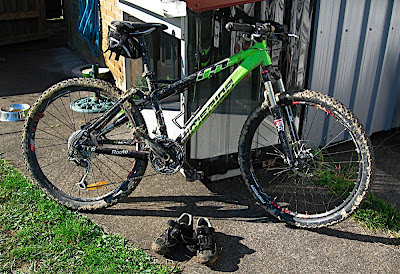 And here's a closer look. No wonder clipping in and out got pretty hard by the end! 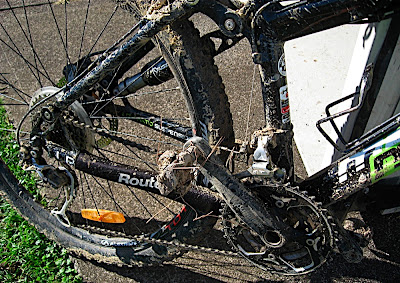