Oh my god! This was a tight finish! Anyway, Sunday was a 2 hour rogaine through the mountain bike tracks in Rotorua. Controls were worth different amounts of points depending on distance and physicality. I had planned out a great last half and an okay beginning but I couldn't get the two to meet so thought I'd just wing it...which, in hindsight of course, was not the best plan because I kept going back on myself and I could have got quite a few more points if I'd planned and thought ahead better.

Anyway, it was fine but incredibly cold. I had on 2 long sleeve layers, full length gloves and my buff under my helmet and even after 2 hours with some epic climbs I still hadn't warmed up enough to remove anything. In fact, my toes were still feeling a tad numb! 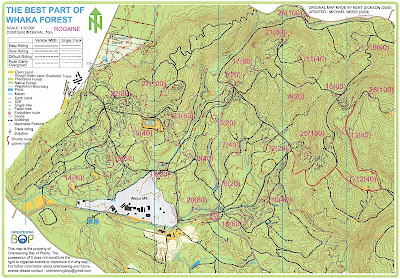 I was still feeling pretty sore after yesterday's fall but determined to have a good ride which I did. I really enjoyed myself and kind of wished it had been a 3 hour race instead of only 2. My riding was a lot more confident and I even came down this steep, winding downhill track riding over half of it which was incredibly brave for me. The only thing was that going up to get this 100 point control took a bit longer than I'd hoped and I was really pushing time at the end.

I thought I'd try and get 1 more (I had been hoping to get 2 more but I knew that wasn't going to happen) but the single track had a lot more corners on it than I expected and it went on and on and on (as I nervously kept glancing at my watch). Coming out from the control I bumped into Brent who was trying to find the control but was confused (the navigator in one of the top adventure racing teams in the world got confused...love it!). I pointed him off in the right direction but then I couldn't find my way out to the road! There was next to no time on the clock, I had mud all through my cleats and pedals so I couldn't clip in on one of my feet and there was still a bit of distance to go to get to the finish...nail bitting stuff! But I did it...with 6 seconds to spare!