Rotorua is supposed to be mountain biking mecca but the only other time I've ridden there was for the National mountain bike orienteering (MTBO) champs last year and I was so buried in my map I barely took any notice of what the trails were like. This time, since the races were fairly casual, I wanted to have some fun.

The first control was just plain mean. We started down the bottom in the carpark and basically had to head up...and up...and up! Well, at least you were all warm by then! To #2 I was caught by Kylie and then bumped into someone else and we rode round and round in circles, quite hopelessly confused, trying to find the control in the maze of tiny single tracks. They were all one-directional but since we were lost and didn't know which track we were on we were probably riding them the wrong way! We all decided heading to the road and coming in from the other side would be the best bet but it was impossible to even get to the road! In the end we all stumbled across it by chance! 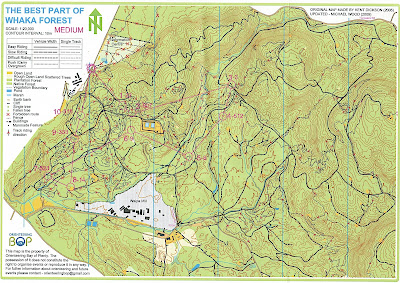 Coming out of #3 (up the top of the hill) I took the wrong road despite carefully checking my map and being convinced I was correct. Luckily I realised pretty early on (as it was all downhill). To get over to the other road I had to head back up the road again or take the single track. I surprised myself by choosing the single track which was awesome fun.

Everything went okay after that, although slow and cautious, until partyway to #7 when I was biking quite fast along a gravel track and there was a huge mud puddle covering most of the track. I thought I'd go round it in case it was quite deep but instead my wheel spun out and I came flying off, landing really hard and in some blackberry. It wasn't very nice! I had to slowly pick myself up and try not to wince too much and then pull my bike out of the mud and readjust some stuff on my handlebars. I think I might have hit my head as I went down 'cause I couldn't think straight and ended up needing a bit of a hand from one of the other racers who came past. The rest of the race was a slow grind to the end!

I thought I did terribly. For a start, I could see at least 20 minutes I could have easily knocked off without even trying (for a start, crashing off my bike and attempting to fix the handlebars took a good 10 minutes). A bit more speed, more concentration and less stupid mistakes and I could have taken off even more time. But I ended up finishing midfield which totally surprised me and I bet Owen, my big rival, by 1 second...and that's all it takes to beat someone!