After the weekend of racing over near Mt Gambia for the South Australian Champs we started making our way over to Maryborough and our base for a week of training.

On the Monday most of the team went for a trek up in The Grampians but because I was supposed to be looking after my foot I joined Di (or "camp mother") to cycling the rail trail going from Skipton to Ballarat. Okay, most normal people would ride it going the other way for obvious reasons once you get on it (umm, going the way we did it was mostly uphill the whole way) but why opt for the easy option?! Okay, it didn't fit with our travel plans to do it the other direction and, well, Di didn't tell me it was going to be mostly uphill. Rob and her sold it to me as a chance to spin my legs and relax. Umm, not unless you count relaxing as riding about 65km and most of that uphill (it's not a steep gradient but the ground is pretty sandy so there is quite a bit of resistance)!

Anyway, it was pretty awesome but very tiring. Di took heaps of photos but I haven't got them off her yet. I'll post some when I get them because the scenery was beautiful. 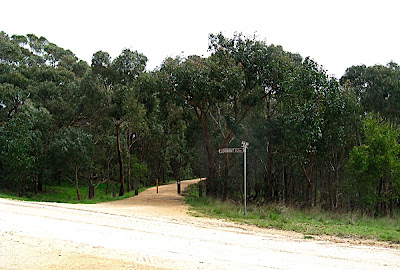 About 10km before the end of the trail (we kept riding into Ballarat to meet our driver afterwards) a magpie came out of nowhere and nearly knocked me off my bike which was quite hilerious especially after we saw it flap off rather drunkenly. Afterwards we discovered you could see where it had wedged its beak in my helmet.

Tuesday was our first official day of training and I was exhausted! Thankfully the map was relatively flat (note the word relatively). We spent most of the day out riding the forest doing various different exercises focusing on smooth transitions through track junctions (i.e. not stopping to check the map every time). 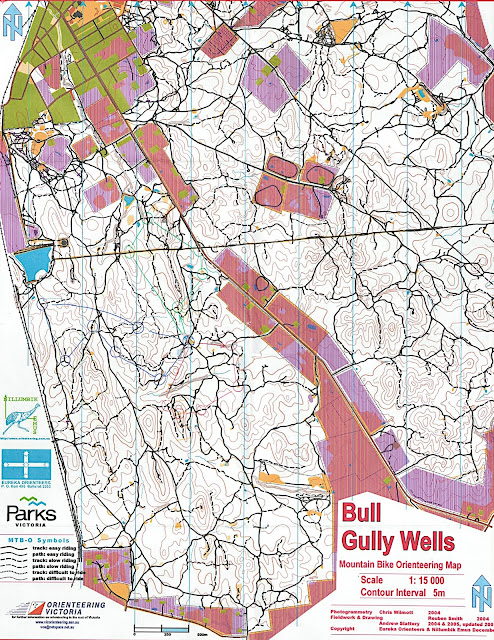 The bush was quite dry and tracks were covered in twigs and leaves. Oh, and rocks. The terrain is definitely more rocky than anywhere I've biked in New Zealand and rocks are hard as I would find out the following weekend! 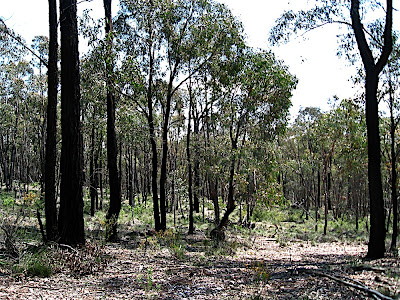 Wednesday's map was a lot steeper which generally suits me. In the morning we rode out round training loops in pairs and I was with Marquita who is, like, incredible (she has several World Champs under her belt). It was really cool to ride with her and I was feeling a lot more confident in my riding by the end. 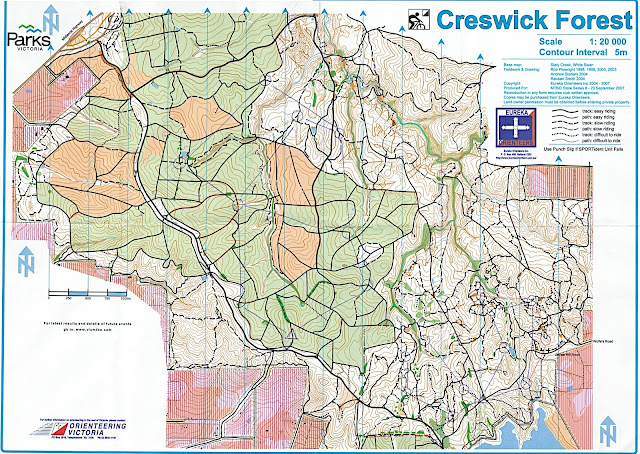 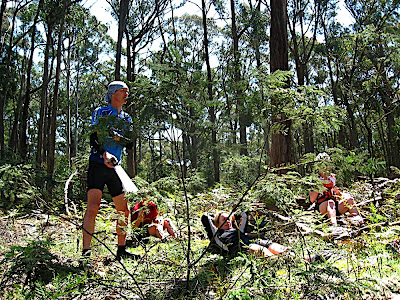 After lunch we headed out on some long legs by ourselves and although we were on the same map (although on the other side of it) the terrain felt really different. It was even steeper than the morning's training too but the forest was awesome. 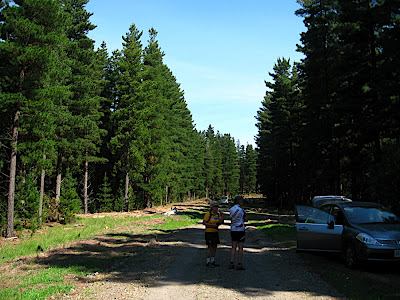 Thursday was the final day of training before heading over to Daylesford for the weekend. We were back over on terrain similar to Tuesday and started off with a relocation exercise. We were in groups and rode out into the forest not looking at our maps. When the leader of the group stopped we then had to work out where we were. Argh!! I'd never (hopefully) lose that much contact with the map so it was really tough but good fun. 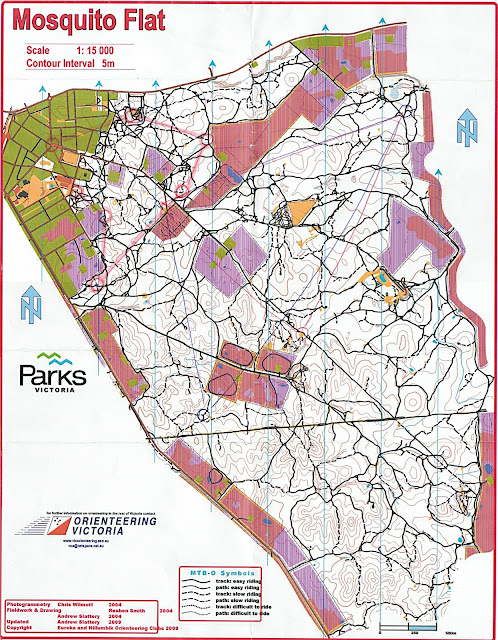 On the second exercise (long legs and route choice) I was riding along minding my own business (well, reading my map on what looked like a relatively smooth piece of single track) when all of a sudden I looked up and saw my front wheel hit a rather large log. It wasn't a bad crash but rocks sure do cause a bit of blood loss. Thankfully I was not the guy who got a stick in his front wheel which threw him off and fractured his sternum and ribs. Not good. 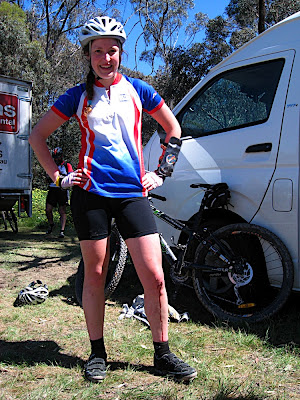 We then had a go at a sprint course which was a bit of a laugh especially at one point where there were a few of us riding round in circles getting ourselves horribly confused! Never let someone else put you off your original plan!

In the afternoon a few of us drove out to Kooyoora State Park to explore one of the most technical (foot) orienteering maps I've ever seen. Have a look at the map here. It's crazy. 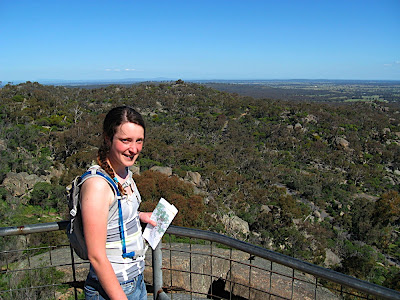 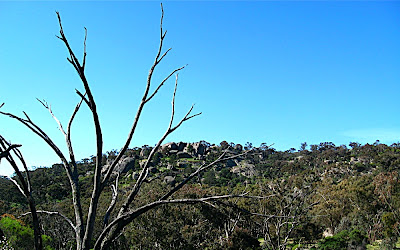 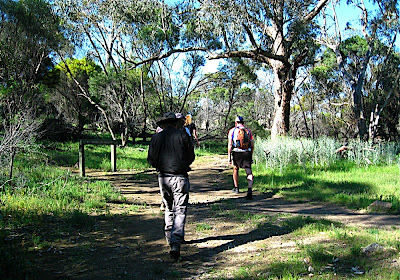 We traveled most of the morning on Friday and arrived in Daylesford (well, we were staying in Hepburn Springs but it's just down the road) around lunchtime. After lunch Rob decided we'd go on a nice relaxing half an hour ride along the river. Um yeah. It turned into quite a long, epic ride with one of the guys even managing to fall down a 12 metre cliff (and come out with only a couple of broken tendons in his fingers...I couldn't believe he was even alive!). 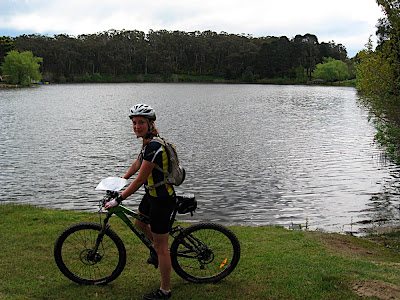 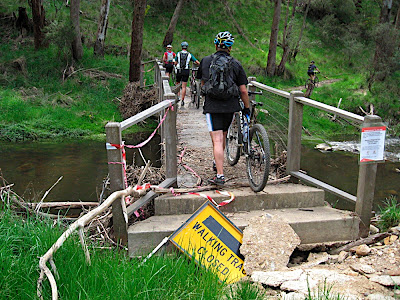 Track closed? No problem, just ride it anyway. Apparently it said no riding either but never mind! 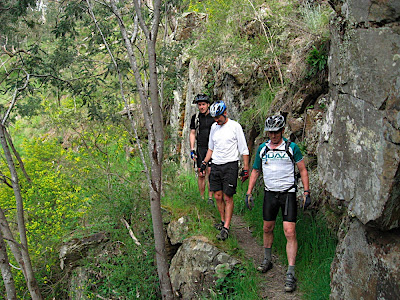 Looking over the cliff where Steve fell down 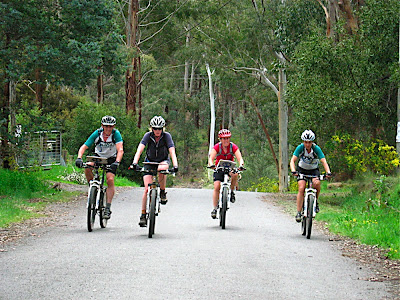