It was always there, just out of sight, waiting.
But what was it waiting for?
- The Tangle Box by Terry Brooks
I have been doing a lot of eating out lately, which is not to say that I haven't been cooking (which also happens a lot...and in case you started to feel concerned, I have still been cooking way more than I have been going out) but just that, well, there are reasons. But anyway, what you really want to see is some food and, with my crappy camera in tow, I have some...

So on Wednesday morning I met my cousin D at the Heritage Hotel Lobby Bar for breakfast because I'd managed to score a 2 for 1 voucher off Moira's blog. Well that wasn't the only reason but it helped! We both ordered the pancakes (there wasn’t a lot of choice in terms of larger meals although there are several small options) and fresh juices. 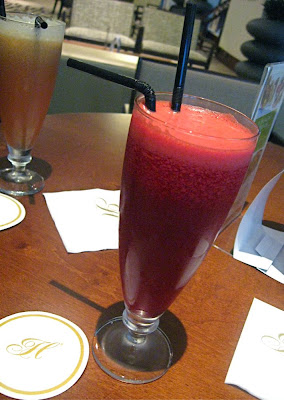 I have a favourite juice combo - carrot, apple, beetroot and ginger so naturally when I saw that on the menu (Liver Lover) I knew I had to order it and I have to say, this was the best version I've had. I loved how super thick and super gingery it was.

The menu was new and for some reason (of which I can’t remember now) we got one plate of pancakes before the other. To make up for it though they brought us out another dish as well, the soyurt parfait with cranberry muesli, grated apple. I thought this was really awesome but D thought the yogurt tasted a bit too much like soy (I'm pretty sure it was the Kingland Soy yogurt). 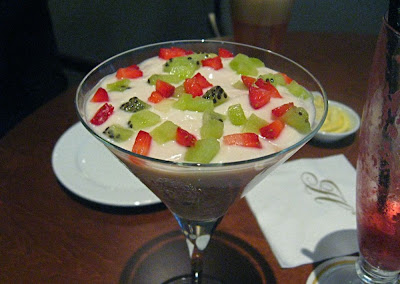 We both ended up ordering the pancakes (there wasn’t a lot of choice in terms of larger meals although there are several small options). To be more precise, berries, macadamia and buckweat pancakes served with maple syrup and grilled banana. 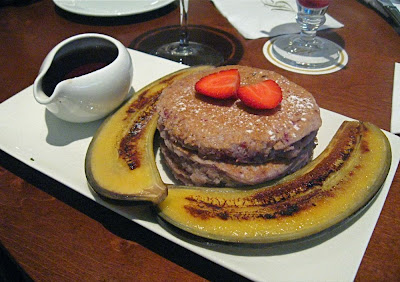 The pancakes weren’t very sweet which I loved and had an awesome nutty texture (both from the buckwheat and the macadamias). They tasted healthy...but in a good way if that makes sense. Plus they kept me full all morning and into the afternoon which was fortunate as I was so rushed off my feet at work I didn't get to have lunch until quite late.

I will be honest here and say that I didn't exactly expect that much when I went but I came away feeling very excited. Our waiter was excellent and the manager came over to have a chat with me and he seemed genuinely passionate about their new menu and the direction the food at the Heritage is going in. You've gotta love that.

But come back next time (or at least some time in the future) for an even more exciting meal at the Lobby Bar...