Ooo, out for dinner...then spoiled with dessert!

"Real isn't how you are made," said the Skin Horse. "It's a thing that happens to you. When a child loves you for a long, long time, not just to play with, but REALLY loves you, then you become Real."
"Does it hurt?" asked the Rabbit.
"Sometimes," said the Skin Horse, for he was always truthful. "When you are Real you don't mind being hurt."
"Does it happen all at once, like being wound up," he asked, "or bit by bit?"
"It doesn't happen all at once," said the Skin Horse. "You become. It takes a long time. That's why it doesn't happen often to people who break easily, or have sharp edges, or who have to be carefully kept. Generally, by the time you are Real, most of your hair has been loved off, and your eyes drop out and you get loose in the joints and very shabby. But these things don't matter at all, because once you are Real you can't be ugly, except to people who don't understand."
- The Velveteen Rabbit by Margery Williams

Things have been a tad busy and stressful of late round here. The long weekend was certainly no exception but that mad story will have to wait until later. Last week J took me out for dinner. We had planned to go to the Japanese restaurant of one of our first dates but alas, it appears to have closed down so we wandered further into town and found KuBick, another Japanese restaurant...but run by Koreans apparently. I ordered the tofu (BBQ style) salad and had got part way through eating it before J reminded me to take a photo. We also got tempura vegetables to share. The meal was HUGE so I had to doggy bag some of it for lunch the next day! 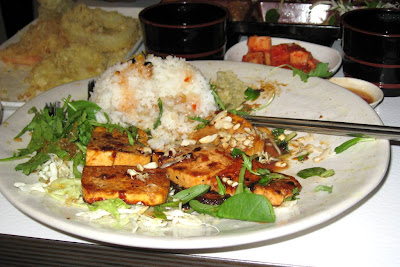 The following night J was clearly feeling like spoiling me rotten so he made us Feijoa, Banana and Toasted Coconut Crumble. I was very impressed! We eat a lot of crumble (generally made by me) but this was something else again...must have been that coconut! 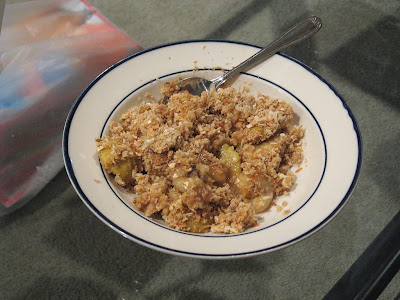 for the crumble
1 cup shredded coconut strands (we used desicated coconut since that's all we had)
1 cup flour (it said white flour but we used 50/50 white/wholemeal 'cause it's more interesting)
1/2 cup soft bronwn sugar (the recipe called for excessive amounts of sugar: 1 cup soft brown sugar and 1 cup white sugar...seriously, is that an overkill or what?!)
1 cup rolled oats
75 g vegan mararine

Lightly grease the base of an ovenproof baking dish. Roughly chop the bananas and feijoas and mix together over the bottom of the dish. Sprinkle over the vanilla essence followed by the brown sugar. Cut the margarine into small pieces and dot over the fruit. Leave this aside while making the crumble to caramelise.

Place the coconut on a baking tray and toast in the oven for about 3 minutes on 180 C watching so that it doesn't burn. Let cool.

In a large bowl mix together the flour, sugar and rolled oats. Add the toasted coconut, reserving a little to sprinkle on the top of the dish. Cut the margarine into little pieces and rub it into the dry mixture with your fingers until well mixed in (at this point, lick the crumbs off your fingers 'cause it's delicious!).

Crumble this mixture over the fruit in an even layer, then sprinkle the remaining toasted coconut over the top. Bake for about 20 minutes at 180 C. Let cool slightly before serving. It would taste delicious with soy ice cream or soy yoghurt but we didn't happen to have either of those things.