The High Lord was on her side. So why did she want to take the skillet that was still sitting on the counter and smack him over the head with it?
- Dreams Made Flesh by Anne Bishop
Day 2 of (Oz&NZ)VeganMoFo and here I am again...I'm impressed with myself already!

Anyway, it was my darling cousin D's birthday a couple of weeks back so we had to celebrate somehow. Since neither of us had anything planned for our actual birthdays we decided on a belated party (basically an excuse to eat cake). But on her actual day I met her in town for lunch at Raw Power. Neither of us had been there in ages so it all felt new again.

I couldn't resist getting the tofu burger...I swear it has grown since I was last here! So full afterwards I could barely move! 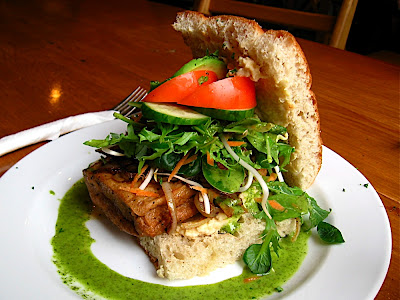 The juice of the day was the Vulcan. I can't remember what was in it other than carrot and beetroot but it was delicious and really refreshing. 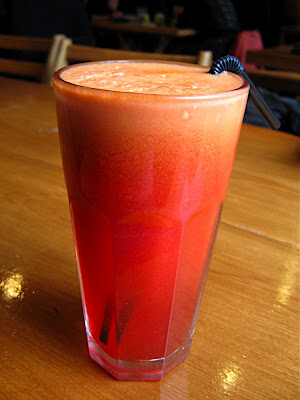 A few nights ago I was having a discussion with my friend L and his flatmate about food photographs in cookbooks versus what they actually turn out like. We were flipping through some cookbook and complaining that the pictures always look so fabulous but nothing we did turned out quite like the pictures (not that they didn’t still taste good though).

A couple of days later I found myself in the kitchen putting together the birthday cake for our belated party and, spurned on by this conversation, I felt quite determined for mine to look at least somewhat like the photo! The cake I was tackling was the Decadent Almond Cake from My Sweet Vegan (with a few adaptions - I used a combination of maple syrup, agave nectar and rice syrup instead of straight maple syrup and in the chocolate ganache I used agave nectar and coconut cream because I’ve never seen soy creamer in my life...wouldn’t even know what it was so I just hoped like hell that coconut cream would work!). 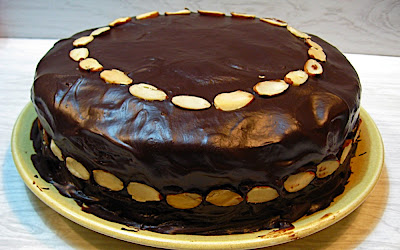 I was rather pleasantly surprised with the results (unfortunately my actual photography skills suck though...it looked so much prettier in real life!). It would have been even better if I’d have been less impatient with waiting for the ganache to cool and set a little before icing the cake ‘cause it was a bit runny to start with. 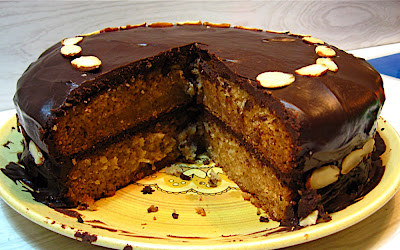 The cake went down a treat with my flatmates and L devouring all the leftovers...lucky I'd eaten two slices on the night otherwise I'd have felt a little cheated!