OY2 didn't come at a good time for me. I had a lot going on, hadn't really eaten or slept nearly enough and my head was all over the place so it was never going to be a good race but at least I got out in the forest which is one of the places I feel the most at home. 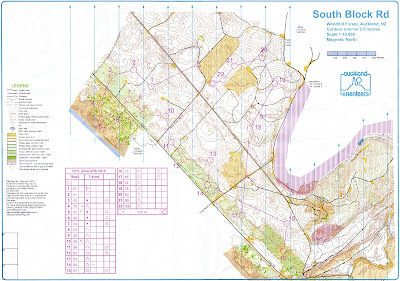 Anyway, I started off okay trying to concentrate on reading the map (I know, this sounds like a really obvious thing but you'd be surprised how many of us don't do it enough). I found the first 3 controls okay although I was a little shaky on #1 which is quite normal for me as I get into the flow of the map. But when I reached the maze (the open bit that we have named The Maze...if you saw it you'd understand) I knew it was not my race. I had heaps of trouble bashing around in there and managed to get a nasty big scar across my thigh after running into a dead branch and in hindsight there was a much better route that would have made finding the control more successful...I just didn't see it until I'd finally found it! #5 was okay but #6 didn't go well again...but then again even Marquita, who was out there with me, had trouble and if she has trouble then it's gotta be hard!

Once back in the forest again things improved a little bit but I was just so tired. Most of the controls weren't too bad apart from #17 where I thought I was in the right area but I hadn't gone nearly far enough. I can't believe it took me so long to work out! By then I was ready to finish but there wasn't any point cutting back early since I was about as far away as you could be and the rest of the course pretty much was the quickest way back! It was just a matter of dragging onwards to the end. Disappointing.