It was really cold and I'd gone for a long run over at Tawharanui with Michael the day before and my shoes had screwed up my heels so I didn't feel too energised which is never the best of starts for a race!! But surprisingly (if I ignored the pain on my heels) my legs felt really good and fresh. I started off fairly well and found everything coming together until I hit control 6. It was a small hill in a fairly vague area and I must have run past it a couple of times without realising it and there was just nothing I could find to reorient myself. It wasn't until I saw a couple of people a bit further north of where I was standing that I realised I'd come a bit far. 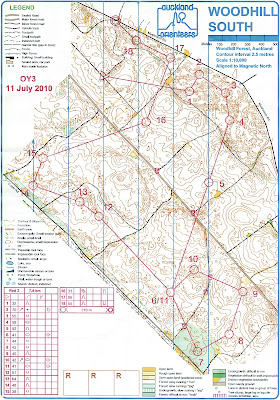 I was okay after that until #12 which I managed to completely stuff up...super embarrassing how bad I did! I thought I was on correct side of the track but I was actually on the north side and of course nothing fitted and I couldn't work it out. I thought I'd head out to the track and go back in from there but it never came (naturally, because I was already on the other side of it). Took me a little while to figure it out but once I had it was a mad dash back to where the control really was!

Then #14 also just didn't work out. There were 3 of us stuffing around in the general area and again nothing seemed to fit. Turns out I'd headed further west. The vegetation boundary wasn't distinct at all and it really threw me. But the rest of the course went fine apart from feeling frustrated about stupid mistakes.

My heels seemed to clear up after about half an hour but once I finished they were hurting again. I think they are having a reaction to my other inov-8 shoes I wear for training. And despite it being beautifully fine, it was freezing cold all day...even in the sun.