Yet another OY at Woodhill...although this time it was a steeper area of the forest. This is a prime example of thinking you had a good run and then coming in and seeing the results and realising that actually, it was a pretty shit run! But at least I love running in Woodhill.

Anyway, I was going really well at the beginning. Contours were all lining up and I was nailing each control...until #6. The problem was I thought I was higher than I was because I would have been about 10 metres away from it when I first stopped but I didn't see it. I then went round in circles trying to figure out where I'd gone wrong. I don't really understand why I had so much trouble. If I'd looked a bit closer at the map the height probably would have been more obvious but I have to say that I never noticed the clearing in the reentrant. Grrr!! 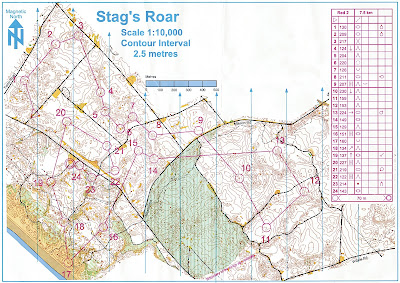 Control 8 I ran right past it and onto the next hill along but figured it out fairly quickly. It was still frustrating though and I think I was trying to go to fast to make up for the previous mistake which is never a good idea. Then at #16, after crossing the main road, I had heaps of trouble trying to adjust to the different terrain (you can't tell by looking at the map but on either side of that main road the terrain is very different). I should have slowed down a bit and been more careful instead of running round like a headless chicken! For #17 I didn't look far enough ahead as the track route didn't occur to me until I was much closer and it would have been heaps quicker and without the need to keep checking the map. Then at #21 I really have no idea what happened but I got really disoriented and frustrated.

I'm running okay but I have been feeling really tired although not nearly as exhausted as I was during the week. I just need to orienteer a hell of a lot better!