Another OY at Woodhill! I managed to convince a friend to come along and give it a go too which was pretty cool.

Anyway, on the way to the start triangle I misread the map, thinking that I had to cross 2 tracks to get to the first control instead of just the 1 (I think it was because the start triangle was on a track and I counted it as one I had to cross) so I overran it but luckily not by too much as I realised I was coming too close to the sand dunes for it to make sense. The second control was out in the dunes but not too hard but coming out of that control for some reason I started heading off to #4 instead! Again, luckily I caught that fairly early and bashed back over the dunes to #3 but it was really frustrating because it should have been an easy control. 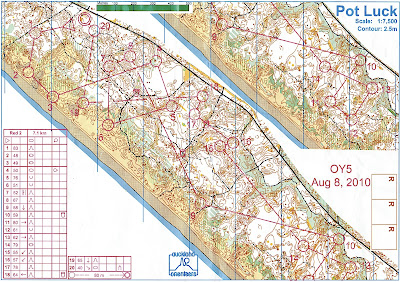 Then coming out of #6, chasing Imogene and Kate, I got my left leg stuck in some tussock but I didn't realise and kept running but of course my leg didn't come with me and I ended up twisting it. It hurt like hell and for a few moments I actually thought I wasn't even going to be able to walk, let alone run. But eventually I got moving on it again but at no where near the speed I'd been going before. So frustrating!

Navigation-wise everything was pretty good after that until #10 where I got confused about where on earth I was but ended up not being too far from the control and there were heaps of catching features so it wasn't too bad. Then it went vaguely alright until #19 which somehow I managed to wing but really I had no idea where I was or how on earth I was going to find out. Not the best of tactics! Then I completely disoriented myself attempting to find the last control which was really rather embarrassing. I ended up somewhere near #8 instead and then popped out on the road. I don't know how that happened!

It was a really nice day out in the forest and a good, technical course and I ended up doing pretty well but it's always frustrating when you know you could have done a lot better.