Oh dear, the OY series this year is not exactly going my way! I was definitely overtired after two really late nights and my knee was still not 100% (I had only run once this week...mostly cycling to keep up the strength as it doesn't seem to affect the knee much).

I started off okay, although a little shaky to the first control, but then I got completely thrown at #4 and I don't really know why or what happened. I thought I'd chosen a good route choice and everything seemed to be going right but I couldn't find it for the life of me so I ended up (after a bit of bashing around) heading out to the road and taking a bearing from the clearing back in again. I found it perfectly this way but it came up heaps quicker than I expected (I almost didn't check the code 'cause I didn't think it was my control!). Yeah, I really don't know what happened! 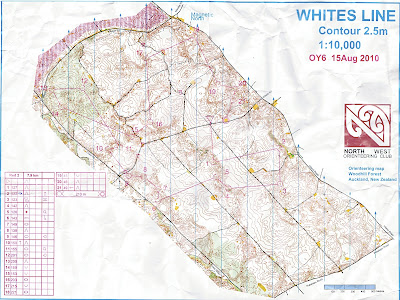 I don't know why it's dated 15 August since it was actually the following Sunday. Weird.

At #7 John Robbie appeared next to me and he seemed to be going the same way as I was to #8 although I knew he wouldn't be on my course but it distracted me way more than it should and I wasn't paying enough attention, ending up overrunning it and almost at #9 instead so I had to backtrack. Then all went okay again until about halfway to #12. I ran out into the cuttings and thought I knew where I was but the control never appeared where I thought it was going to so I headed up to the road to relocate, but worked it out on the way. Turns out I was way too far south. The terrain under food in the cuttings was absolutely awful and I pretty much had to walk. I think I cursed out loud when I saw I had another 2 controls to get in that area!

Once I got back into the decent forest I started going better again but was feeling pretty exhausted. It felt like quite a slog to finish. I don't think I stuffed up anywhere particularly there but to be honest I was so tired I'm not sure if I can remember it! But it turns out that most people doing my course had pretty long, exhausting races too so I guess everyone found it tough out there.