This was the second to last OY of the 2010 season and I was really quite determined to have a good run.

Unfortunately I didn't get off the greatest of starts. Somehow I ended up running too far to the left and everything looked so vague in the cutty grass which must have been about waist-chest height. I certainly couldn't see any knolls. There were a few people, Cath and Andrew included (they'd started ahead of me) floundering around up in the general area so I figured it wasn't going to up there and headed out to the right, eventually sort of stumbling upon it. The knoll was naturally more obvious once I'd actually found the control. 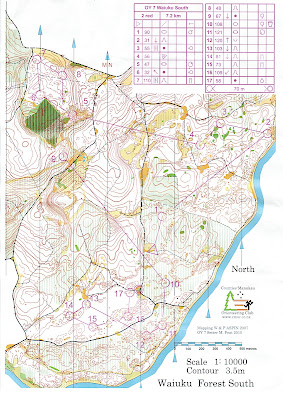 I don't think my route choice was optimal to #9. Cutting back through the native bush (marked as white but was more like light green) took too much time and it might have been quicker to cut around the road. But I dropped down onto the control pretty much perfectly. To #10 it was about avoiding the climb so I headed to the right and to the main road running down the centre of the map. Pretty easy really.

From #11 to #17 was a series of fairly short legs which were pretty cool. I picked up a bit of speed and felt really confident on my navigation...until #16 where I was looking at the hills on the wrong side. I clicked eventually and managed to punch the control and run off before a few others in the area realised. Always good!

On the whole, my navigation was pretty good but I was just too slow getting through the cutty grass. Long sleeves might have helped 'cause by the end my arms were throbbing and my wrist was bleeding. But I bet Michael back (not that it was really a competition since he was doing course 1 and I was on course 2) and I was well in the top half of the field.

One more OY to go...White Lightning.