Packing a pot of pies

I made pot pie (or whatever it is you might call it)! Well, actually I've made it several times in various different ways and it has even passed the flatmate test (as in they were still alive the following morning). This is my first version and the only one I got around to photographing which is rather unfortunate because once it was in the oven I realised I'd forgotten to put the baking powder in the scone top despite putting it out on the table with all the other ingredients! So the following versions looked much cooler. This particular version is filled with leeks, carrot, mushrooms, onion, creamed corn and tofu and topped with a wholemeal scone mixture adapted from The Vegan Table. 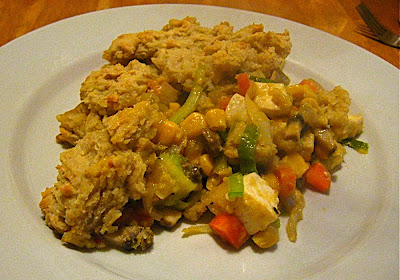 Other versions have involved chickpeas, cannellini beans, courgette, broccoli, cauliflower and any other vegetable in my fridge! Basically you stirfry up the veggies and I add a tin of creamed corn to give it some liquid. Then once they are pretty much cooked I pour the mixture into a casserole dish then whip up a scone topping and drop that on top. Bake in the oven for roughly 20 minutes and there you have it (but be aware...it'll be super hot inside). Perfect food for winter and the cold, wet nights we seem to have right through spring.

Anyway, I'm off...as usual my packing is quite behind schedule! Think of me this weekend as I fly into the earthquake zone and then head off deep into the wilderness!