Pie in the sky (with diamonds?)

'This is pretty nice for Hell,' Fi said to me as we paused in the cool stone gap.
- Tomorrow, When the War Began by John Marsden

After far too many late nights this past weekend (yes, I am a nana and proud of it) I am so tired that all I really want to do is curl up on the couch while watching episodes of Jonathan Creek. I've only seen 3 episodes so far but along with his lying on The Unbelievable Truth (he talked about tigers AND managed to smuggle all 5 truths past everyone so he earns extreme points for that alone) I am becoming an Alan Davies fan. I get a bit obsessed about things. This might turn out to be one of them. 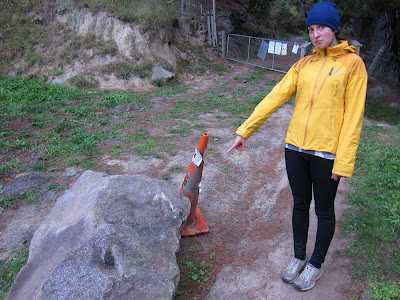 Random photo of a rock to distract you momentarily. Note how they felt that you required a cone to point the rock out in case you missed it. They've gone a bit cone crazy here I think.

Right, well today I thought I would tell you about pie. Pie in New Zealand would pretty much automatically mean a meat pie of some kind for most people. I remember when I was a kid my Mum would occasionally buy a supermarket 'family' pie and attempt to cut it into 5 pieces. There would be much argument over who got what bit because the pie was, rather unfortunately, a rectangle and if you got one of the end pieces you basically only got pastry (although this wasn't too bad since that was the only real bit I liked on them).

Anyway (that was quite a tangent...got a bit nostalgic there!), fast-forward to today (or, in reality, a few weeks ago) and I thought I might try my hand at making my very own pie. I've never made a pie before and I'd bought myself a pie dish after getting all excited and buying everything in sight back when we were setting up our flat. This pie is nothing like the pie of my childhood. In fact, it's nothing like any pie I'd ever had before but it was darn tasty. It's a bit of an adaption on the Mushroom, Leek and White Bean Pie from Vegan Brunch with my first ever batch of homemade pastry. 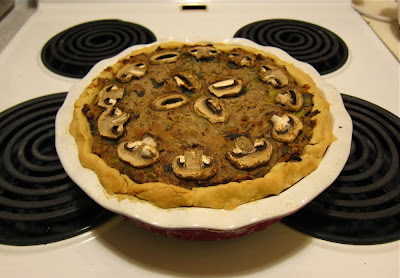 I didn't have enough mushrooms (or the kind of mushroom it talks about since I've never heard of cremini mushrooms before but fortunately white button mushrooms worked just fine) so I added heaps of onion. It seemed to all work out. But what couldn't when it was encased in rich, melt-in-your-mouth pastry (I think I might have overdosed on the margarine!)? I know the recipe says to leave it at least 30 minutes before serving and that it's best at room temperature but honestly, I thought it was way better hot out of the oven (or hot after being heated up in the oven again) and with a whole lot of my Mum's feijoa and ginger chutney. 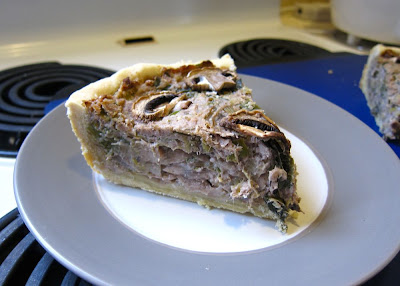 So, I've done the savory pie but it appears that most of the world are used to associating pies with sweet desserts. M's Mum gave us the most ginormous of pumpkins and I was pretty much over eating pumpkin soup and putting it in every meal we had so I thought, since we were heading off to a pot luck, that I'd attempt to make pumpkin pie. I've never had it before (apart from a raw version at The Lotus Heart) and decided I'd use the Pump-Can Pie recipe from Kris' 100 Best Vegan Bak­ing Recipes. 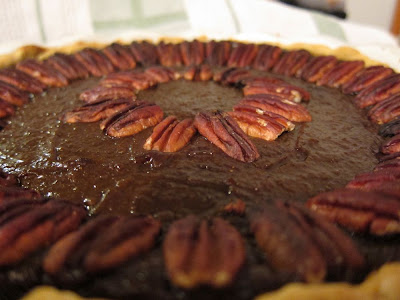 It seemed to work out okay although I should have actually used the amount of sugar the recipe called for rather than naively thinking it would be too much. It sort of tasted a bit weird but then again, the idea of pumpkin pie seems a bit odd to me. I think I'd rather make it with kumara (which my Dad thought was even more of an odd idea). People did seem to enjoy eating it though, even my friend's little girl who hated the pumpkin in the savoury dish. She ate all her pie but didn't even finish her ice cream!

The last pie, however, is definitely awesome. Caramel Cream Pie...with a name like that you can't really go wrong! I have made a variant of it before (using tofu instead of soy cream cheese which is actually probably the best way to go to be honest because then it isn't so mind-blowingly rich) but this time I thought I'd go all the way and see just how many fake dairy products I could use! 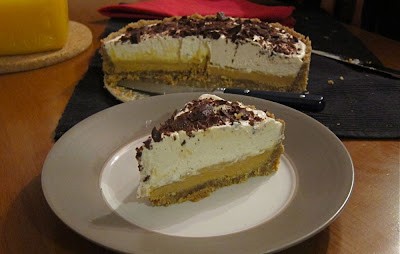 This pie lasted ages because you could only eat fairly small slivers at a time before feeling ill and like you might need a lie down after the explosion of sweet, rich, fake dairy goodness. Make it now but be prepared for the coma you might find yourself in afterwards!

Right, sorry about all that rambling. I'm tired and my brain is spinning around and drifting off a bit. But go and make some pie. That will make everything better!