Something cold and soft was falling on her. A moment later she found that she was standing in the middle of a wood at night-time with snow under her feet and snowflakes falling through the air.
- The Lion, the Witch and the Wardrobe by C. S. Lewis

Golly gosh, it's been an age since I've last posted! That snow I mentioned may not have come on Sunday but it sure was around by Monday. So much so that we couldn't get into work. Snow day!!! 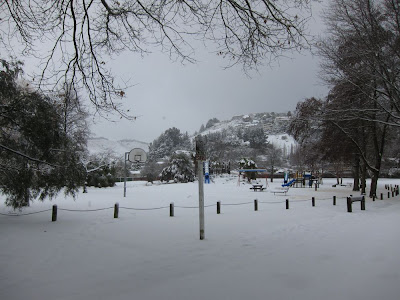 The park on our street

I wish I could tell you that I spent the day cooking and baking up a storm to keep us warm but instead I spent most of it on the couch or in bed horribly sick. Thankfully I managed to redeem myself today as snow blanketed the city yet again (I could get used to these long weekends!). 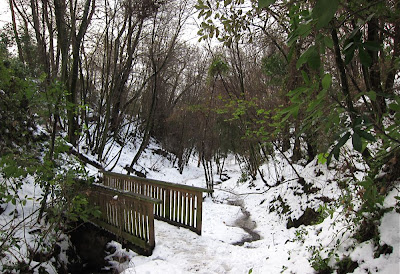 Look at the magic you encounter when you go running in the snow!

Cooking in my brand new fast slow cooker is a big pot of pumpkin, coconut and lentil soup (to go with five seed loaf from the breadmaker). I hope it works out because the instruction manual did my head in!

M was cutting up part of a huge pumpkin for me to use in the soup but it was too much so I pondered what to do with the extra. In the end I boiled it up and then blended it to make a puree. Half went in the freezer but half went into a ginger and pumpkin loaf which has already been partly devoured. I am trying restrain myself from eating the whole damn thing right now! 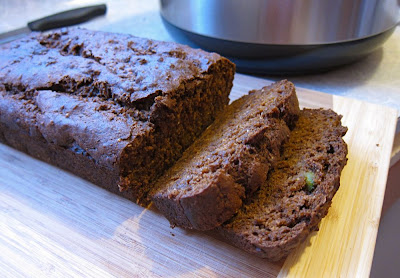 Gingery Pumpkin Bread Adapted from a couple of recipes in Kris' The 100 Best Vegan Baking Recipes.

Preheat the oven to 180°C. Lightly grease a loaf tin (a smaller one is better since it doesn't get all that big).

In a large bowl mix together the flours, baking soda, ginger, cinnamon and salt. In another bowl whisk the pumpkin puree, oil, apple puree, brown sugar, molasses and milk together until smooth.

Add the wet mixture to the dry ingredients and mix gently until just combined. Spoon into the loaf tin and bake for about 45-50 minutes until, well, done. It might take a tiny bit longer but our oven is fan-forced and I can't figure out how to stop it!

Leave in the tin for at least half an hour before turning out onto a cooling rack.