One can spot a fellow musician in any context, even amongst policemen.
- Cloud Atlas by David Mitchell
My lovely cousin D decided she wanted to compete in a running race and chose the 6km North Shore Coastal Classic as her first attempt and I accompanied her round the course. She did an amazing job, running almost the whole way while I talked my head off and probably drove everyone else around us a little crazy! It was a nice gentle cruise for me which was a good recovery after the day before and the weather was glorious so all in all it was a good day. 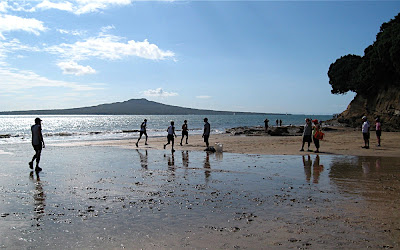 Anyway, after the race I whipped us up some food from her Christmas present to me, Ani's Raw Food Kitchen (admittedly we only just exchanged gifts last week 'cause we're a bit behind the times!). First up was a scramble using the Love the Chicks Pate as the base with diced tomato, capsicum, avocado and baby spinach. 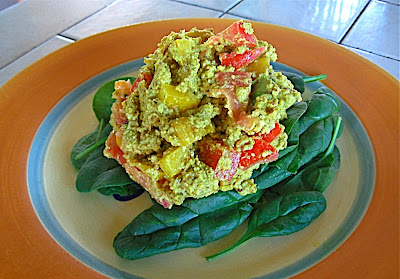 This was the recipe that caught my eye when I first picked this book up ages ago on a typical browse in Borders and I knew it was the first thing I wanted to make when I got the book. It was super easy to make (chuck everything in the food processor and off you go then stir in your veggies...easy as pie) and tasted really good but it was very rich especially after all that time out in the sun and we didn't end up eating that much.

The second course was the Coconut Breakfast Cakes with maple syrup and melon. I ended up using LSA instead of ground flaxseed and mixed in chopped walnuts and blueberries too. 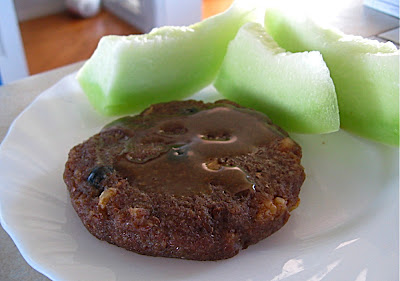 Now these were delicious which totally surprised me 'cause when I first read the ingredients I couldn't understand how they could taste good. The LSA I used (and the flaxseed I buy) is obviously a much darker colour to what she used 'cause mine came out a lot darker than the picture but oh well! I will definitely make these again and mix up the ingredients and additions even more.

On Sunday night The Chef and I hit up the Lantern Festival at Albert Park in the city (along with his family and the entire population of Auckland it seemed!). I wish I'd taken my camera 'cause we got some awesome (and crazy) food and there were some beautiful lights. Veg "chicken" nuggets, veg "corn dogs" (ewww!), BBQ corn, banana leaf rice with bean curd, vietnamese spring rolls (also not that crash hot unfortunately) and freshly squeezed orange juice. There was so much more to try too but my stomach was too full by then!

Anyway, it's the year of the tiger and tigers are my favourite animal so that rocks (and the tiger lantern was beautiful - you can see a closeup of its face here)!